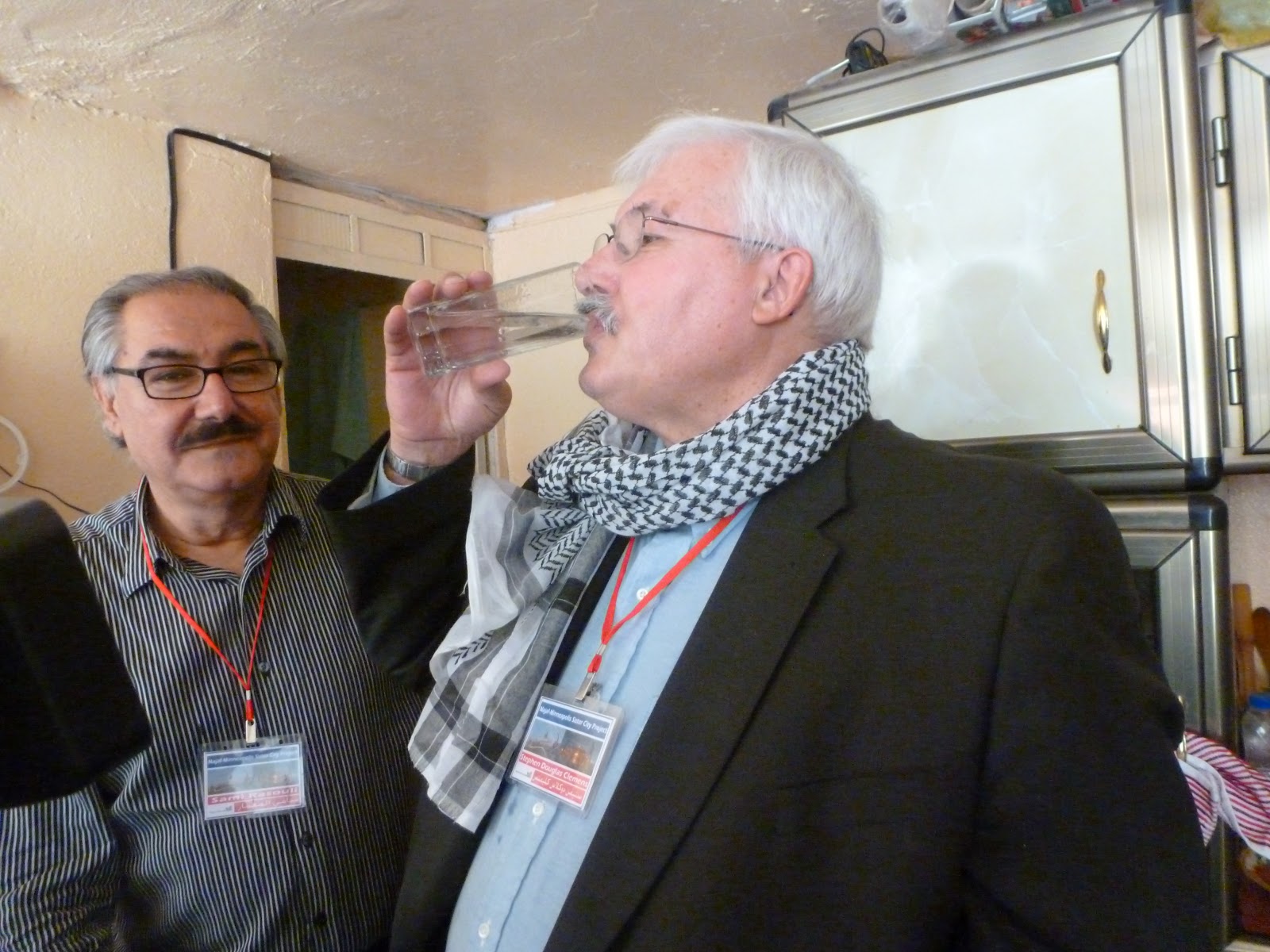 The action was purely symbolic. After our tax dollars were spent creating rubble in this land of early civilization, it is time Americans started cleaning up the mess that was created by our destructive obsessions. Picking up litter and debris from a neighborhood street is designed as a symbolic act of repentance (I didn’t pack sackcloth in my suitcase for this trip) as well as an act of humility for Americans who came as conquerors rather than partners.

Members of the Muslim Peacemaker Team as well as a representative of the NGO organizing Najaf as the 2012 Cultural Capital of the Islamic World joined with us in picking up in the neighborhood where Sami Rasouli resides. I was honored to have his youngest son, Omer, just turned 5 years old, as my partner. He held the trash bag as I picked up and then I held it for him. Several of the neighbors came out to see what we were doing and some wanted to take photos as well.

Sami described the virtually non-existent garbage collection process for neighborhoods which are not part of the downtown tourist area and remarked, “If you are a Prince and I am a Prince, who will lead the donkey?” as an explanation why many men in the Arab culture stand by and let the women do a lot of the work. He hopes to break the stereotype and Omer was eager to join us. 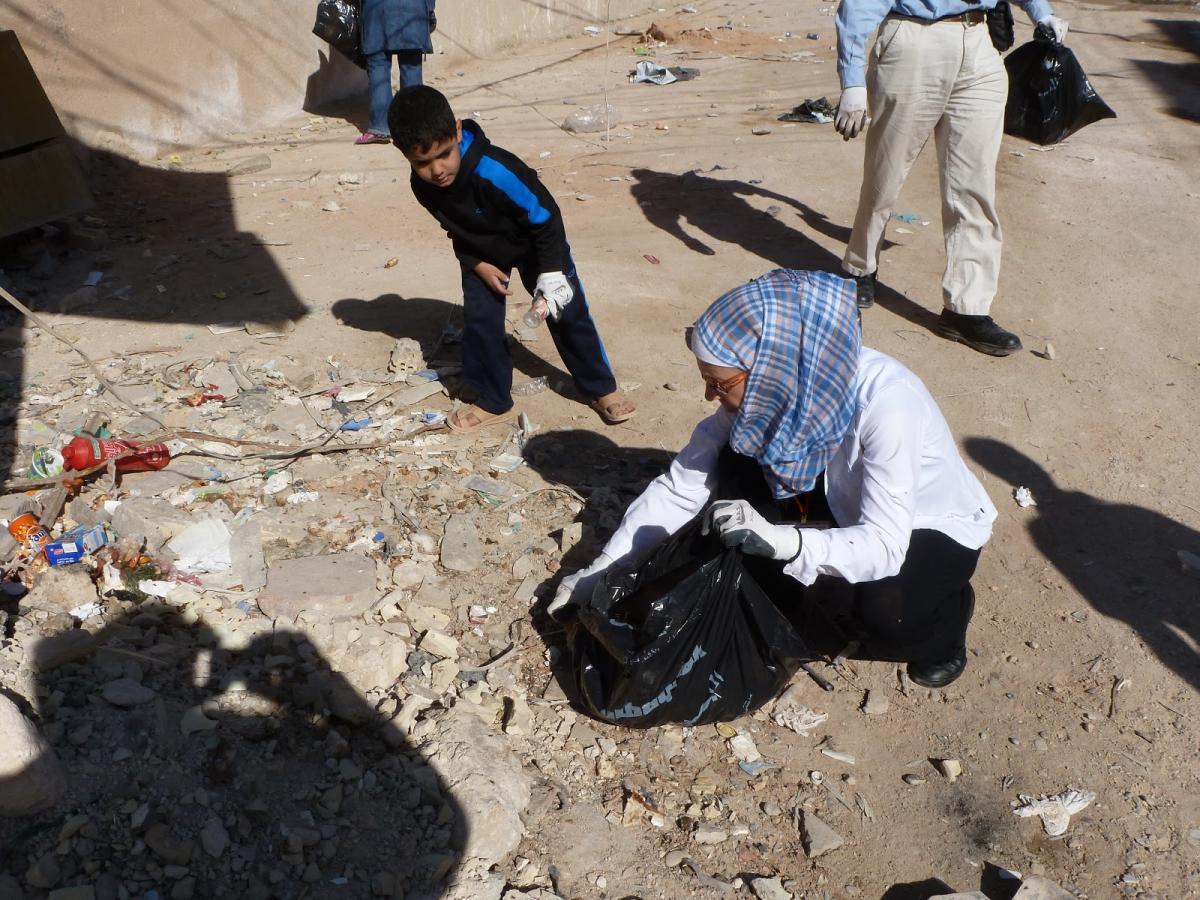 Actually today was a day which called for a lot of flexibility. We no longer had access to the Foreign Ministry’s vehicles for today so MPT secured some 4 seat pick-up trucks and some cars to transport us with MPT members as drivers. Last night we decided that today we would go to a school as a brief stop before our service project to distribute the letters Jess Sundin gave me from her daughter Leila’s class. The original plan was for ½ the group to go to the girls elementary school and the other half to the boys school across the street but we all ended up at the girls school.

After being greeted by a supervisor/inspector from the Education Ministry, the Principal told us she had a brother who lives in Minnesota who is married to a woman from Lebanon. She welcomed us and introduced us to one of the teachers of English. I read the letter Jess had written to the school and Sami translated it so all could understand and showed them the photo of the Leila’s class. The teacher suggested we give the letter to the sixth grade English class since the students would better be able to read the English words. 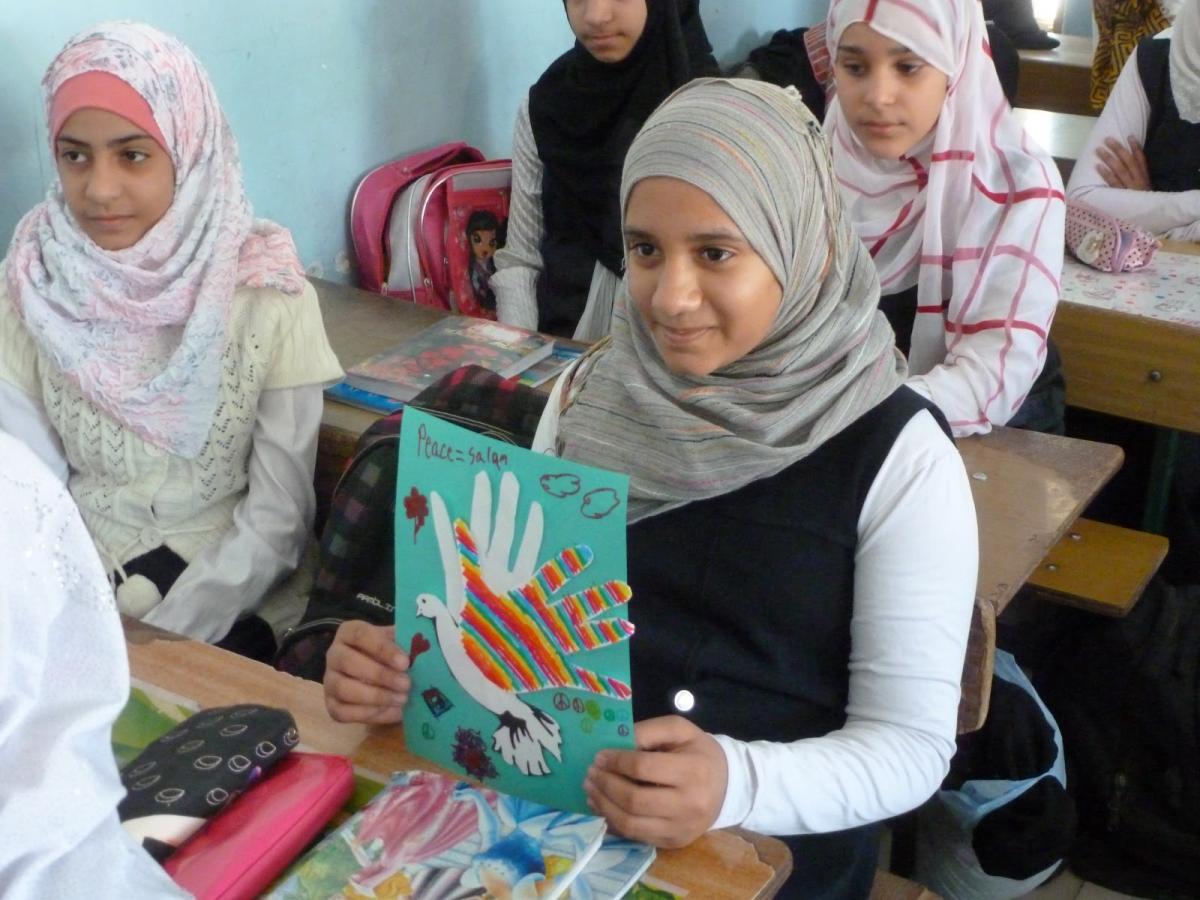 The girls smiled broadly and greeted us as we entered and Sami asked me to say a few words before distributing the 16 letters. Since there weren’t enough letters for the approximately 25 girls, the teacher handed them out to each recipient. Each “letter” had a dove on the backside which the American students had decorated. That small gesture of reaching out to other students will hopefully help these future leaders of Iraq see at least some Americans in a different light than the fear and anger they experienced during the occupation.

The plan was to do the trash pickup and then travel to the local Al Sadr organization – a “Black Panther-style nationalist” group who show their solidarity with the poor by service programs. By their opponents they are mostly know for their militancy but by those who receive necessary aid, they become heroes. Alas, it was not to happen today as our schedule kept slipping. The school visit, designed for 20 minutes lasted almost an hour and then we walked nearby to see where Sami and his family lives. Their baby had been fussy the other evening so we missed seeing Suad and Roi’ea but we got to spend time with them this morning. The home is simple but welcoming.

Sami explained to us how the water filter works in his home. First he filled a small bowl with filtered water from his wall-mounted unit and then a second bowl of water from the tap – city water from Najaf. After it set for a minute and both appeared to the naked eye to be alike, Sami put a saline tester into first the filtered water, then the tap. As he was doing this, he explained that 1-120 was acceptable for drinking. The filtered water scored 31 and the initial reading for the tap water was a little over 120. Sami said, “Oh, I should have shaken the filtered water out of the device before measuring but even before he could, Deborah, who was filming this “experiment” exclaimed, “Wait, Sami, the numbers are continuing to go up!” She counted over 200, over 300, up and up until it stopped at 986. But Sami wasn’t finished his demonstration. He next took an electrolyzer, similar to an immersable hot water heater, placed it in the cup of filtered water and plugged it in. As it heated the water toward boiling, it grew amber in color from the minerals in the water reacting to the heat. Next the tap water. As it heated up, it grew darker and darker until almost pitch black. He removed the electrolyzer, stirred the tap water and we were both amazed and horrified as he said, “Many of the poor families have only this to drink because they can’t afford a filter or the bottled water. 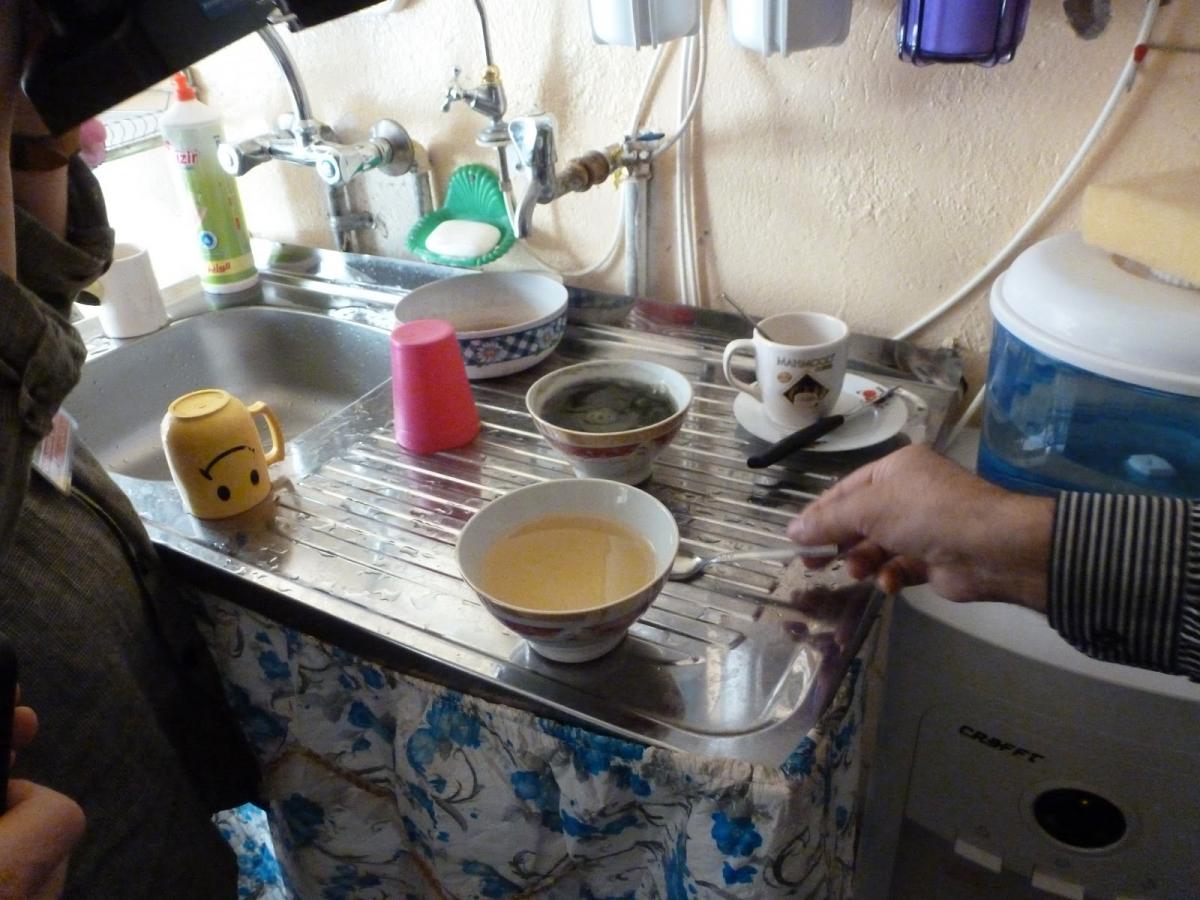 Sobered by the stark inequalities, I still needed to demonstrate my faith in the water filters that my wife Christine and I have contributed toward under the IARP Water For Peace program. I asked Sami if I could drink a glass of his filtered water and he handed me a glass filled to the brim. It tasted fine, and now, eight hours later I am still fine (photo at top). Others in the group might not have been ready to drink up but a half an hour later when Suad, ever the gracious hostess brought it a tray full of glasses of filtered water, almost all the others drank as well. I’m convinced this Water For Peace project is a life-saver.

After learning about the present realities of trash pick up and sanitation in Najaf from Sami, we did our service project, washed up thoroughly afterwards and then walked to lunch since it was now too late to meet with the al Sadr people.

The sumptuous meal took quite a while of our afternoon, having to move from one table to another for our desert and then wait for the tea to be served at the end. By the time we left the restaurant, it was time for our bridge vigil to begin but we did not bring the signs with us. The original plan had us returning to the guest house for a rest before the vigil. Instead, Sami asked if he could drive us to one of Najaf’s poorest neighborhoods. When delegations from Iraq come to Minneapolis, the city tour they receive does not usually include either the near Northside or Phillips Neighborhoods. I know Islamic Cultural Capital folk won’t include this neighborhood either but Sami wants us to see all sides of the reality of Iraq today. After all, if our guest house is a former Saddam palace, we need to experience the other side as well.

Sami takes us to the home of a man who worked as his gardener several years ago. He graciously invites us in and brings carpet for us to sit alongside the walls of his courtyard/garage because the lights have gone out in his house and he is not on the private generator list for the supplement. Actually, no one is on the list in this neighborhood because you don’t see all the additional wires connecting each house. Our host pours the men coffee as the women go to the side of the house to greet his wife and children. He tells us 14 live in his 200 square meter house and the man next to him has 23 people in his house. 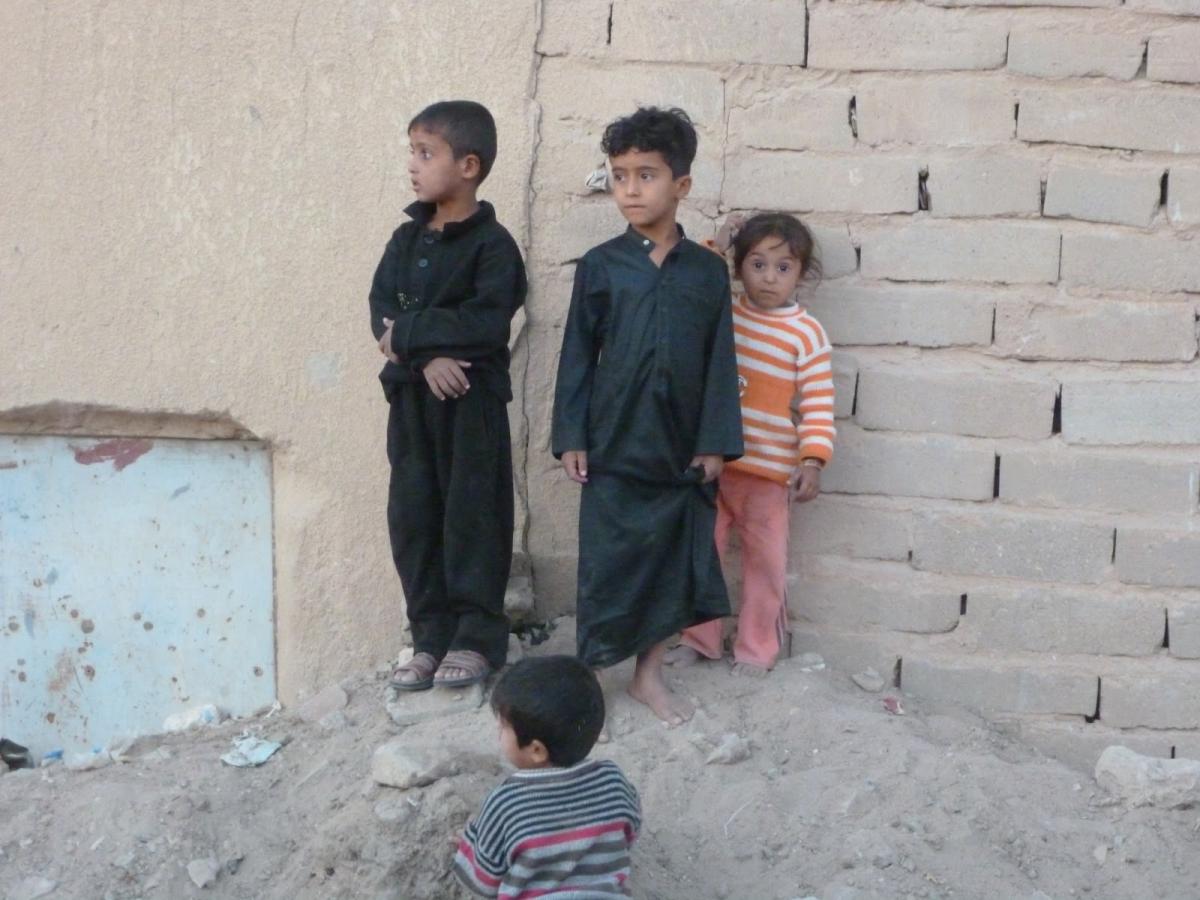 Although we dropped in unannounced, the room quickly fills with other men who want to meet his visitors. As we prepare to leave, he asks us if we will return tomorrow because he’d like to host us for dinner! Sami tells us, “Please just tell him thank you (in Arabic) and I’ll respond to him.” These people are the salt of the earth and we are honored that they can receive us as friends. They may never meet the Governor while he will entertain us later in the week. Something to ponder as we close another full day.