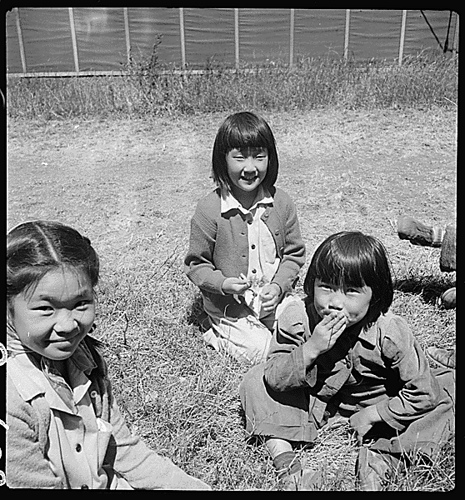 Sixty-nine years ago, Franklin D. Roosevelt signed the executive order that led to the internment of Japanese Americans, forced migrations — later referred to by Congress as “fundamental violations of the basic civil liberties and constitutional rights of these individuals” — commemorated through today’s Day of Remembrance. Photographer Dorothea Lange documented the forced evacuation of Japanese (and other Asian) Americans to camps; eventually, around 120,000 people were detained for the duration of World War II. Of those, 62 percent were American citizens. (A far smaller number of Germans and Italians were affected by the order as well.) 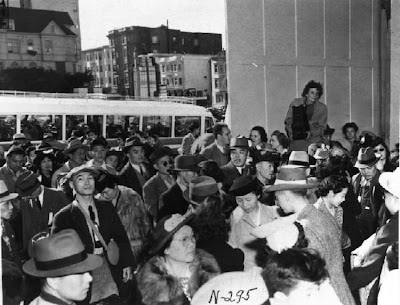 Hired by the War Relocation Authority, Lange (pictured at the top of the photo above) photographed life in Japanese-American neighborhoods and at processing centers and camps. 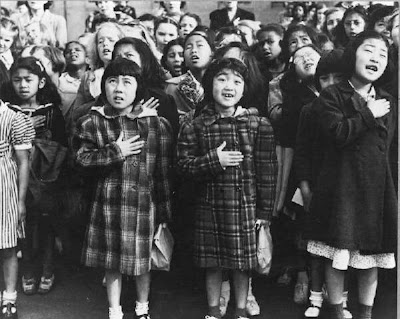 Quickly, the Library of Congress writes, Lange “found herself at odds with her employer and her subjects’ persecutors, the United States government”:

To capture the spirit of the camps, Lange created images that frequently juxtapose signs of human courage and dignity with physical evidence of the indignities of incarceration. Not surprisingly, many of Lange’s photographs were censored by the federal government, itself conflicted by the existence of the camps.

In the book Years of Infamy, the late Michi Weglyn — an American citizen sent to a camp when she was 15 — wrote that “our government had in its possession proof that not one Japanese American, citizen or not, had engaged in espionage, not one had committed any act of sabotage.” In fact, according to the Commission of Wartime Relocation and Internment of Civilians, internment was “motivated by racial prejudice, wartime hysteria, and a failure of political leadership.” Acknowledging that a “grave injustice was done to both citizens and permanent residents of Japanese ancestry by the evacuation, relocation, and internment of civilians during World War II,” Congress passed the Civil Liberties Act of 1988, which paid restitution to those affected.

One of the most arresting works on the topic is the 2006 documentary The Cats of Mirikitani, in which filmmaker Linda Hattendorf takes in homeless New York artist Jimmy Mirikitani after 9/11 only to learn how, echoing anti-Muslim hysteria following the attacks, World War II internment ripped his family apart.

Here’s text of the internment notices (click to enlarge): Dorothea Lange, “Hayward, California. Two children of the Mochida family who, with their parents, are awaiting evacuation bus. The youngster on the right holds a sandwich given her by one of a group of women who were present from a local Church. The family unit is kept intact during evacuation and at War Relocation Authority centers where evacuees of Japanese ancestry will be housed for the duration,” 5/8/42, U.S. National Archives

Dorothea Lange, “Hayward, California. Farmer of Japanese ancestry is showing his identification card to a Wartime Civil Control Administration Control Dispatcher as he is about to board the special bus for Tanforan Assembly center,” 05/08/1942, U.S. National Archives