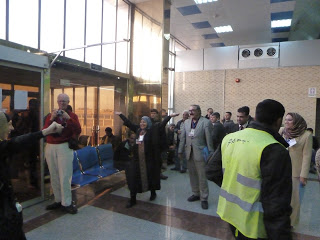 I had left Iraq just 3 months before the US war-of-choice began in March 2003. My experience with the Iraq Peace Team was powerful and life-changing because I was able to act on my faith rather than my fears. So this land between the Tigris and Euphrates has a special place in my heart.

Once again, we are overwhelmed with hospitality. As soon as we entered the Najaf airport terminal building after our 2 ½ hour flight from Istanbul, I immediately recognized the broad, effusive smile of Sameera, a member of the Muslim Peacemaker Team who had traveled to the US several years ago with the first Iraqi delegation from Najaf. They came bearing an invitation for Minneapolis to become a Sister City with Najaf and Sameera was one of the three women in that delegation of 14. She spoke very little English (about as much as my pitiful attempts at Arabic) but one always knew she was overflowing with love and peace by her warm smile and the way she embraced other women.

Sameera is still a typical Shia Muslim woman from one of the most conservative cities in Iraq. When she arrived in Minneapolis, she didn’t offer her hand to men in greeting because that was to her upbringing a culturally inappropriate thing to do. But by the end of the two and a half weeks in the Twin Cities, she shook my hand and thru the interpretation of Dr. Askouri, another delegation member whose spoke fluent English, she told me she wanted me to come visit Najaf. My response at the time to her and the others who invited me to come to their hometown was, “I’ll have to wait until the U.S. withdraws its occupation forces first.”

Well, with the exception of some military guards in the Green Zone and several consulates, some military trainers for the Iraqi Army, and still many military “contractors”, the U.S. troops are gone. So I was free to come as an unarmed (and without a security detail escort) civilian ready to engage in citizen-to-citizen diplomacy. ;Apparently, that diplomacy involves a lot of food! (More on that later.)

Besides Sameera, I also noted the friendly smiles of Hiba from the Governor’s office and Ali and Nasir from the Iraqi Foreign Ministry Office in Najaf lined up to greet us along with my dear friend and peacemaker, Sami Rasouli – the prime instigator and encourager of the Sister City relationship. Sami had returned to his original hometown in September after he and his wife Suad welcomed their new daughter into their family while in the US for 3 months this summer. Sami had helped arrange our flights and now was there to guide us through the process to secure our visas needed for our 12 day visit.

After being escorted to a separate, quieter waiting room, as we continued to greet one another, the Iraqis unfurled a huge banner welcoming us. And then a second banner! Sami told us the whole city is buzzing with the news of our visit – even though none of us could pass as dignitaries or even elected officials!

After collecting our luggage and getting our passports stamped, we were escorted out into the 80+ degree heat (now about 8:30 AM) to the awaiting SUVs which will drive us to the Governor’s Guest House where we will stay as his honored guests. It is quite a shock to learn it is one of many former palaces built for Saddam Hussein, now deposed but not easily forgotten. We’d prefer to stay in more humble abodes (and will do some home-stays with local Iraqis) during part of our visit but it is impossible to turn down such offers of genuine hospitality.

At the Guest House we are given a bag with some dried figs and canned nuts “to hold us over” if we were still hungry from our 31 hour-in-transit experience with 9 time zone changes. Not being a seasoned world-traveler, my body-clock is thoroughly confused – but I’m not hungry. But as soon as we are given our assigned, spacious rooms, we are reminded that there will be “breakfast” waiting for us in the restaurant on the level below our rooms. It is 10 AM by the time we begin to eat the fresh Iraqi bread (one of my favorite memories of my stay in 2002), cheeses, jellies, and other assorted foods – and the requisite hot tea, this time sweetened to our own desires rather than pre-sweetened.

We are given some time to freshen up and/or crash on our beds before being invited for lunch at 1 PM. We eat outside in the shade and feast on freshly-caught carp cooked on the grill. Tasty and nourishing! I ask Joan Haan, a good friend and fellow delegate to share the huge portion with me, knowing that we’ve already been told to gather at 5 PM to ride into the “old city” of Kufa for dinner and a welcome reception with the Governor of the Province of Najaf. Looks like we’re getting a real “taste” of citizen diplomacy.

It is hard to say in just a few words why I am here. I want to say, “I’m sorry,” for the actions of my government. I want to work on re-establishing relationships between Iraqis and Americans which forgo weapons and domination. I want to visit new friends in their homes and listen deeply to their stories, to weep and laugh with them. Most of all, I want to look my fellow peacemakers from the Muslim Peacemaker Team in the eyes and say, thank you for your courage and your witness. How can we work together to build a peaceful and just society?

I brought along with me a copy of the book by Greg Barrett just released before our trip, The Gospel of Rutba: War, Peace, and the Good Samaritan Story in Iraq. It retells the account of three of my friends injured as they left Iraq during the days of Shock and Awe – Christian Peacemaker Team members befriended and healed by “the enemy”. Their story, embellished by their return trip several years later to thank their saviors, reminds us of the importance of this work of reconciliation. I look forward to 12 days of connecting in ways that transcend “diplomacy” and help us re-connect with our common humanity and our relationship as sisters and brothers. These Iraqis are looking for partners; they have much to teach me when I’m ready to learn. “Inshalla”, God willing, as my Muslim friends remind me. 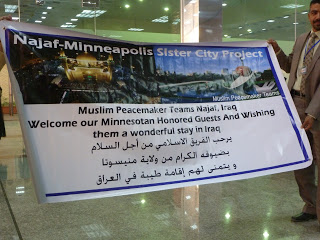 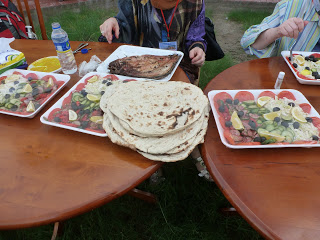 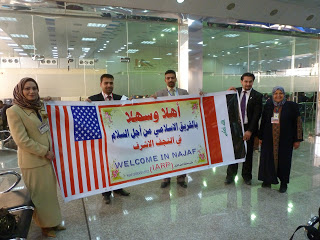