The Family Reunion over on Saturday, I settled into my motel room in Dubuque IA. I had just given myself a mini-tour of this small Mississippi river city which I have visited a number of times over the years, and I felt impressed with what I saw. It seemed transformed from the generally drab place I remembered in the past to a quite attractive present.

Something in Dubuque seemed to be working okay. 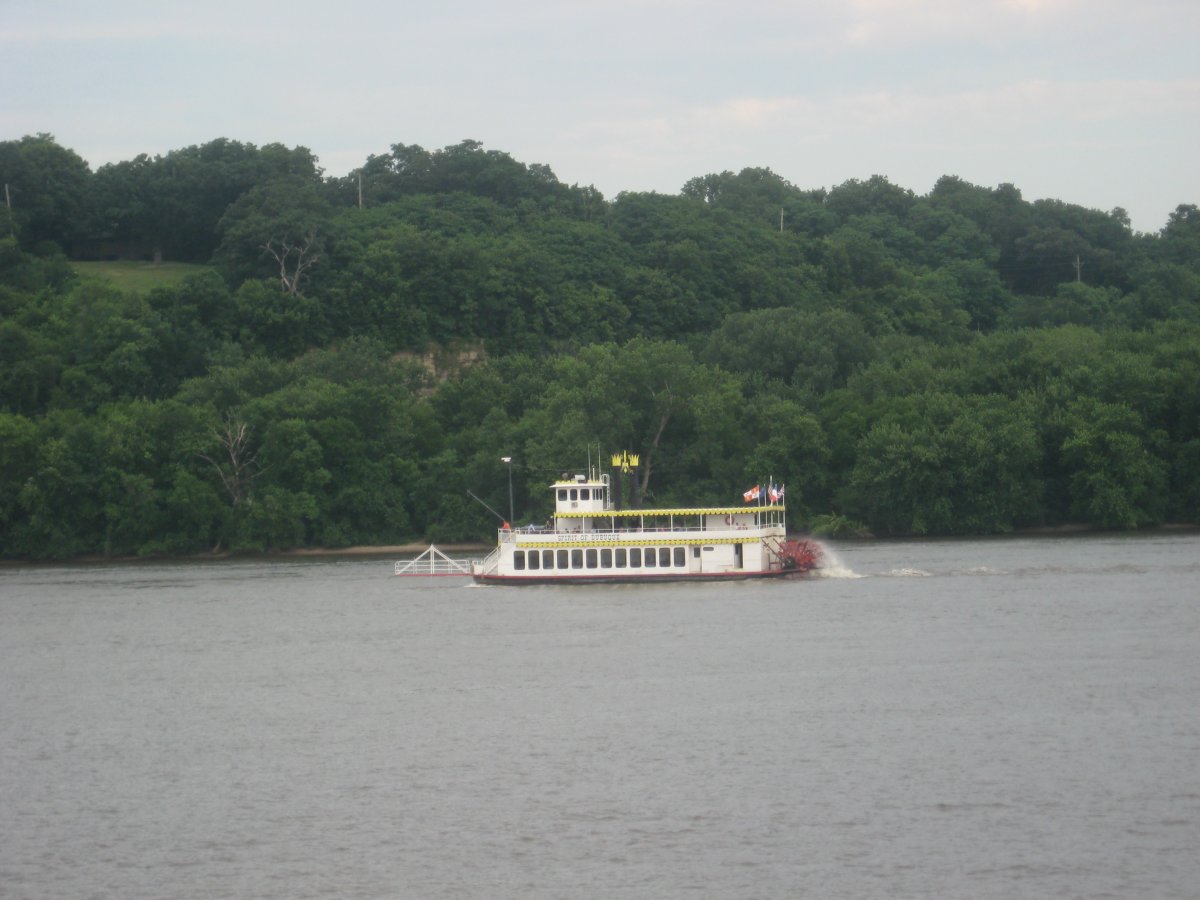 On the Mississippi from riverfront Dubuque IA July 9, 2011

I was too tired to leave the motel room, and too awake to go to sleep so I turned on the television. I’m not a TV guy, but this was at least company. A stroll through the wasteland found me at HBO, where the selection of the moment was Wall Street: Money Never Sleeps. The movie was a few minutes in, and I entered it where a wealthy broker was talking with a young broker in training about some investment deal apparently taking place someplace many times zones east of the Street. I wasn’t taking any notes – this was, after all, a movie – but the segment I had reached had a particular piece of dialogue which I generally remember: Broker to kid: “To me, $125 million is like a buck and a quarter.” He grabbed a handful of money, gave it to the kid and said something like “take this money and go out and stimulate the economy”. Next scene had the kid in a bar about to spend wildly, presumably on wine, women and song.

The movie didn’t interest me, so I started channel flipping and stopped for some reason at the local TV channel replay of the Dubuque City Council meeting of July 5, 2011.

I never watch this stuff at home, but for some reason the Mayor and Council drew me in, and I watched the entirety of the meeting till it went in closed session for some legal matters. It was fascinating. (The Minutes of the particular meeting can be accessed here. Select “View All” under City Council Meeting Minutes, and then select July 5, 2011). I entered when a citizen, unpracticed in public speaking but clear and eloquent in his own way, was complaining about enforcement of a local noise ordinance which resulted in some motorcyclists being ticketed. He was representing effectively a bunch of unseen bikers in the room with him, people who appreciated what he was doing in their behalf.

The Mayor and Council listened respectfully, and while they didn’t agree immediately with his request, they identified for he and the audience the process that would be followed to determine if some modification in policy could be made. I thought to myself: were I in his shoes, I would have felt I had been listened to, not dismissed. The situation must have been tense. The Mayor indicated he had had lunch with the bikers representatives earlier, to better understand the situation. Great move on his part: defusing the situation.

The meeting continued with the normal ‘this and that’ of city government. There was a fascinating report on an ongoing and obviously carefully planned program to work towards elimination of plastic bags in Dubuque stores. I got the impression that such a controversial plan had some potential for success.

It is said that the more local the government, the nastier and insane it can be: you can read examples of this most every day in community reporting because it is news. Quite certainly that Dubuque Mayor and Council could tell stories about their own city government. My whole career was working with people in organizations, and I have often said that if you have 100 people gathered anywhere, there are at least a couple who will cause a dilemma. Magnify this by thousands (towns and cities), millions (states), hundreds of millions (countries) and there’s plenty of differences to deal with.

But on this particular night, July 9, 2011, through the eyes of local community access television, I saw a city that seems to be working well. An hour or so earlier I’d seen the evidence as one simple tourist driving around the Mississippi River town.

And here I write, in a state that is shutdown due to paralysis at the State level (with a potential for settlement just announced 11 a.m. on Thu July 14); and in a country that is lurching towards catastrophe. What can I say? If they can get things done in Dubuque, why not on a larger scale?

Of course, there are answers to this question, but that’s for another time.

Thanks, Mayor and Council of Dubuque IA for giving me some hope.

As for our state, the big news (till the aforementioned announcement) is the possibility of running out of beer. And as for our nation, my favorite blogger filed a most interesting compilation about the Washington D.C. scene. You can access his 3000 or so words here.