Dave Thune wins easily in the ranked choice voting, which I expected. In the first allocation round, the votes that had no mathematical chance were eliminated and those votes were allocated to second choices. Dave Hosko did move from third place to second place. However, it was an easy win for Dave Thune in the last round. 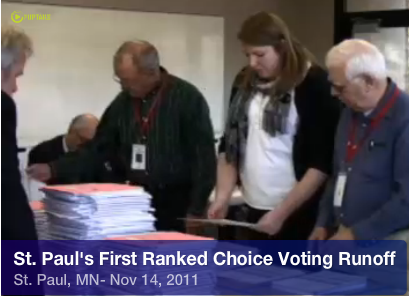 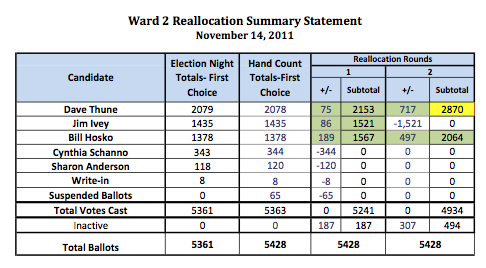 Celebration at Mancini’s tomorrow at 5:30!

It is obvious that more people vote when there is more of a race. In the more competitive races, voters did rank more choices. Essentially we got people who normally only vote in general election to also vote in the primary runoff election! So we really increased the participation in our election.

Ranked choice allows St Paul to skip the primary saving cost and saving hassle. Rather than spend money on voting machines, the secondary rounds are done manually. This causes same drama with a few days delay but noting compared to our recent recounts.

The general consensus was that this election did not have problems or issues even with the new ranked voting process. The cost savings of skipping the primary ballot will happen this year. Instead of five judges at each of the 105 polling locations plus all the cost of support, we had a 6 judge reallocation team for about 5 hours.

A Ramsey county judge says that he prefers that manual reallocation as compared to the electronic reallocation because everyone can see and have confidence in the process.

A voter can vote just one choice. I recommend that a voter rank all choices if the voter has any preference among the remaining candidates.

The process of reallocating choices of lower vote candidates

Repeat steps 2 through 4 until there is a winner. It is really easy to see who is winning by watching the piles grow higher.

Now Elections Manager has modified the process to expand the elimination the lowest vote candidates to all candidates who have no mathematical chance of continuing in the next round.

Winning happens when a candidate gets a majority of votes remaining. That automatically happens when there are only two piles (candidates) left unless there is an absolute tie. Because of voters who drop out in ranking choices, the final winner may have just a plurality (less than 50%) of original votes cast but must have a majority of the voters who ranked a preference between the two remaining candidates.