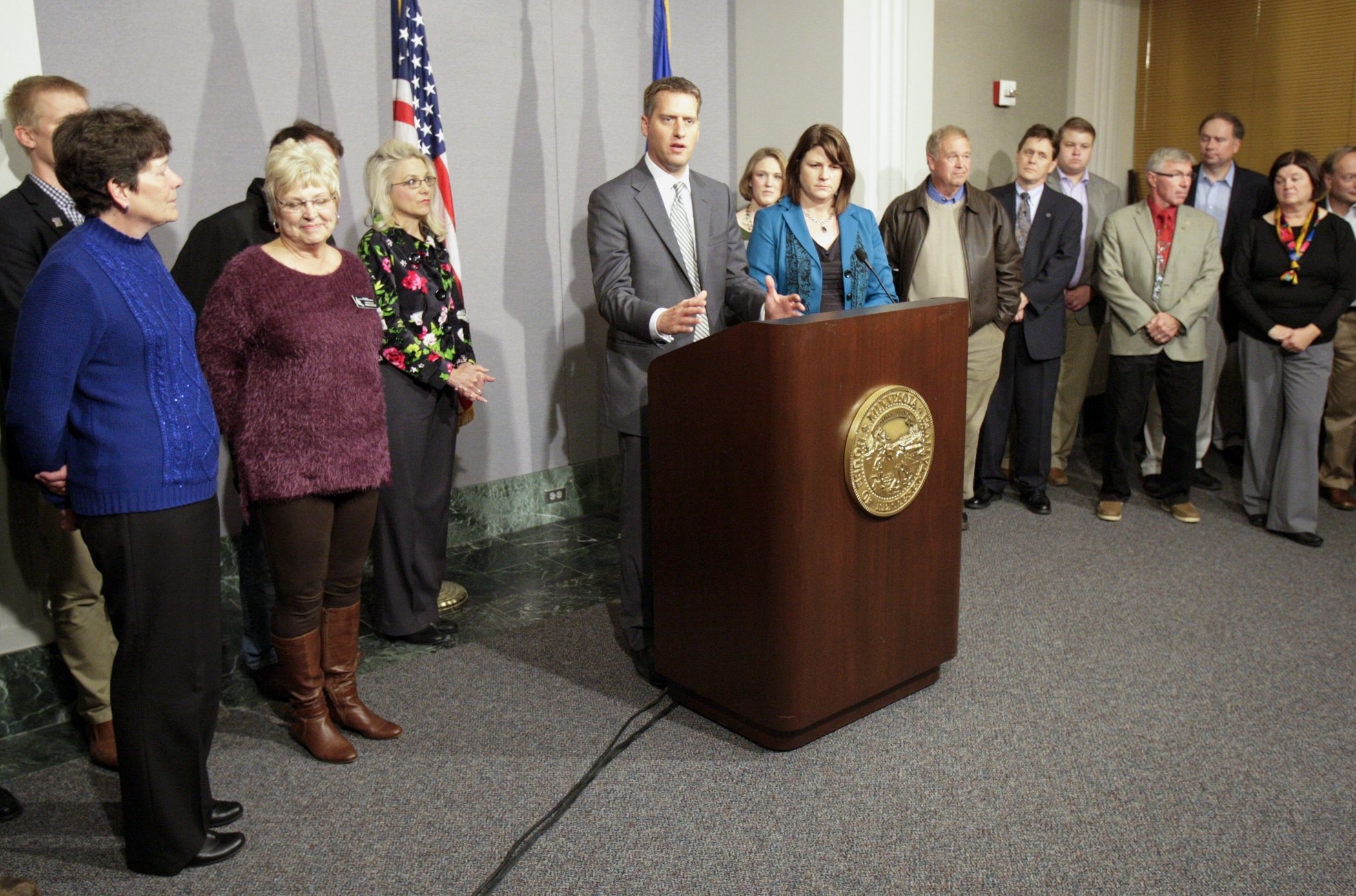 (Photo by Paul Battaglia) House Speaker-designate Kurt Daudt and House Majority Leader-elect Joyce Peppin are surrounded by members of the Republican caucus at a Nov. 7 news conference after their leadership elections.

Rep. Kurt Daudt is expected to be the next speaker of the Minnesota House of Representatives.

“It is the greatest honor of my life to be elected the next speaker,” said Daudt, who was first elected to the House in 2010 and served as minority leader in 2013-14.

When the Legislature convenes on Jan. 6, the speaker will be elected by the full House.

According to House Rules, the speaker has all the powers and duties of a presiding officer. That includes the appointment of committee chairs and members, ruling on parliamentary motions and signing legislation passed by the body.

The majority leader serves as chair of the House rules committee, schedules legislation for consideration and leads floor debate.

First elected in 2004, Peppin said the last two years under DFL control were too focused on Minneapolis and St. Paul. “Our goal is to represent all of the people of Minnesota. We’re not going to leave Greater Minnesota behind. … That starts with each member getting a seat at the table as we put forward our agenda.”

Added Daudt: “We really believe we were elected to solve the problems Minnesotans care about. We want to roll up our sleeves, and we’re ready to get to work and do that.” He listed job creation, caring for seniors and veterans, and prioritization of road and bridge funding as examples.

A recount is possible in the race between Rep. Yvonne Selcer (DFL-Minnetonka) and Kirk Stensrud, a Republican who represented the area in 2011-12. With 19,190 votes cast, Selcer won by 36 votes.

At a Thursday night gathering, the DFL chose Rep. Paul Thissen (DFL-Mpls) as minority leader-elect for the upcoming biennium. Thissen is the current House speaker.

In a statement, Thissen congratulated Daudt and Peppin. “I look forward to working with both of them to deliver results for the betterment of all Minnesotans.”

Although Republicans control the House, the Senate has a DFL majority and DFL Gov. Mark Dayton will be in charge for the next four years following his successful re-election bid.

“We have been in the room at the end of session negotiating,” Daudt said. “While I think they know I’m a tough negotiator, they know they can trust me and they know if I say something we’re going to do it. I hope I can expect the same from them.”