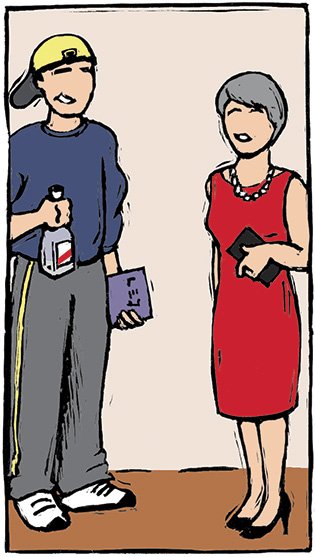 Fifty-two and newly divorced. Sounds like the symptoms for something fatal. I moved to Cathedral Hill and started going to Nina’s Coffee Café for daily dialysis. Out goes the old, sad blood, in comes the new, highly caffeinated stuff. Some of my friends said, “Why don’t you date?” And other friends said, “Forget about dating. Get comfortable with being alone.”

I was able to postpone the decision when, in November, a minivan ran into me at the cross streets of Selby and Kent. I fractured my pelvis, lost a front tooth, got stitches in my head, and was swaddled in a neck brace for two months.

While healing I had plenty of time to peruse dating websites and look for the perfect boyfriend. It was like opening the Sears catalog at Christmas. There were ones with gray hair, white hair, and no hair. There were even ones with a wild hair.

One day in March after I was fully toothed, I tapped out a witty note and pushed “send” with the same nonchalance I used to push my readers up on my nose. Twenty-four hours later I had a date at Costello’s.

In the bar the post-Christmas lights were cheery, the big front windows provided a great view of snow dancing down the street, and the booths were cozy. I gulped my chardonnay and romantically rambled on to John (all names are changed) about my months of healing. He listened and patted my arm and tried to give me dating tips. Seven months later I contacted him again as though we had never met. He wrote, “We tried this once, remember?”

My next date was at W. A. Frost—the most romantic place in Saint Paul. During the appetizers, Harold brought out his iPhone, with pictures of him astride a custom-built chopper decorated with orange flames. Over the entrée, he rebuilt several carburetors. For dessert, Harold admitted his true age and that seventy was the new fifty.

Without any suffering on my part, I waited until summer for my next date. We met at the Muddy Pig. If you like beer and want to pretend you can’t hear what your date is saying, this is the place to go. Kevin was a Lutheran minister. He had been married three times, but the romance had always tapered to nothing. This time he was going to have it written into the vows that there must be passion three nights a week or it would be grounds for divorce. I held my tongue and did not say, “Only three?”

On New Year’s Eve day I went to Nina’s. I am a regular now. When my cute flirt/friend Sam asked what I was doing that night, I thought he was proposing a date. He arrived at nine wearing sweat pants and a ball cap, carrying a book about astrology and a half-empty half pint of peppermint schnapps. I was dressed for a night on the town. He looked into my eyes and whispered that the stars were aligned and we were meant to be together until Nina’s opened in the morning.

Inside the front door of Nina’s there is a sign-up sheet for people who have undertaken writing projects while sipping the dark roasted brew. You put your name on the list, and when you become famous you can say it all started here. Sometimes you have to choose between a New Year’s Eve fling and a place where you can go and write a story. My name is on the list.

Lifestyle
Saint Paul Almanac
Do NOT follow this link or you will be banned from the site!
X