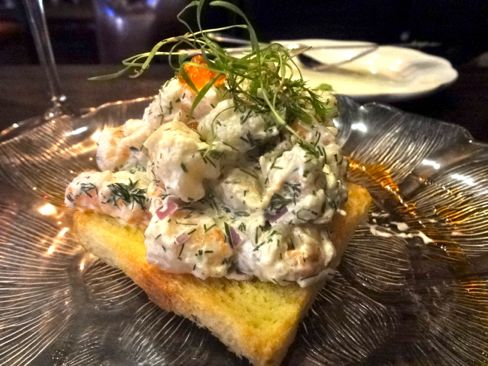 Thursday is Valentine’s Day, but my sweetie was feeling surprisingly unromantic about the prospect. “I’m not really in the mood for going someplace for an over-priced special menu dinner just because it’s Valentine’s Day so you have to go out and celebrate,” she said. Or words to that effect.

I hope she feels the same way about over-priced flowers. We’ll see.

So instead, we’re planning on celebrating early—on Tuesday night, when the Grand Cafe has its Date Night Tasting Menu. Unfortunately, that’s right after this week’s deadline, so the original published version of this review will be a little sparse on details (check back for an update).

At any rate, we’re longtime fans of the Grand Cafe and its owners, Mary and Dan Hunter, and the Date Night menu sounds great: three courses with wine for $50 for two. The dinner starts with hors d’oeuvres of smoked sable with dill creme fraiche and boquerones with endive and bacon jam, followed by the house salad of mixed greens with a creamy fennel vinaigrette, and entree options of horseradish-crusted braised beef short rib with winter vegetables; cioppino with salmon, scallops, shrimp, mussels and lobster; or a mushroom pasty with dill sauce. 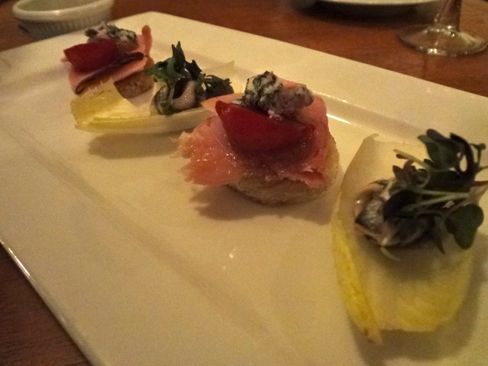 Update: the dinner was pretty much as described on the website, except that the hors d’oeuvres of smoked sable had been replaced with a pair of very tasty toast rounds topped with thinly sliced house-cured ham, apple butter, blue cheese and pickled pearl onion. (Turns out they make all their charcuterie on the premises.) Both the braised short rib and the cioppino were delicious and served in generous portion. A full bottle is included in the price – We chose the Loup dans la Bergerie, a very agreeable organically grown merlot-syrah-grenache blend from Languedoc ($24 on the wine list.) The other option would have been a bottle of Pedroncelli Sonoma Valley Sauvignon Blanc ($22). 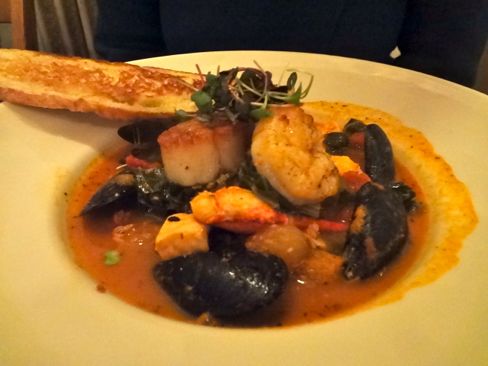 The Grand Cafe also offers a more ambitious Valentine’s Day menu for $100 per couple, including dessert, with optional wine pairings for $50.

Last week, our date night outing was to Mona Restaurant & Bar, which I have previously described as the Twin Cities’ best-kept dining secret. That must make their Tuesday night Date Night menu the best kept secret squared. I found it by diving deep into Mona’s online menu, and when we actually went to sample it, at 8 p.m. on a Tuesday, we were the only customers in the place, apart from a couple of people drinking at the bar.

Mona’s Date Night menu (slightly different from the one on their website) offers four shared courses, plus a carafe of the house wine for $35. For our first course, we opted for the bibb salad with roasted beets, pecans and a pear vinaigrette—light and fresh, and large enough to share. (The other option was a butternut squash soup with cream and toasted seeds.) That was followed by a sumptuous cold course of shrimp in a creamy dill sauce on a brioche—a favorite from a previous visit. 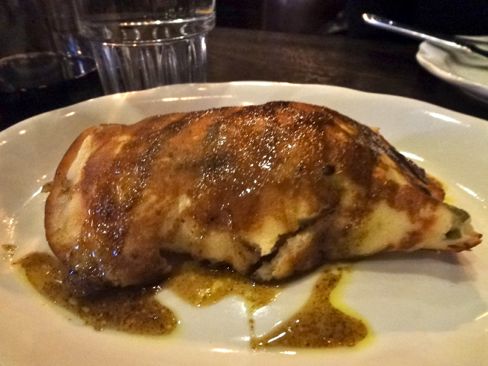 The egg en cocotte that followed was pleasant, if not exciting: a soft egg with braised radicchio, wild rice and creamed spinach in a pastry shell. For the final course, I chose the pig in a blanket, a leek crepe stuffed with braised pork belly and dried cherries, which didn’t quite live up to our server’s very enthusiastic recommendation. It was okay, but a bit dry, and the coq au vin might have been a better choice. The house wines are from Hobo; we opted for the red, which was a very drinkable full-bodied Cabernet blend. Our carafe contained enough for four full glasses of wine—worth the price of the dinner all by itself.

Overall, a fine dinner, and a great value. Mona also offers a Prix Fixe menu on Monday nights that offers some of the same dishes, plus a different wine with each choice, for $35 per person.