What I’ll tell you at the bar:

A nice little shocker which offers a few thrills and some heart. Bloodless scares make it a good option for general audiences, worth a rental if not the theater. 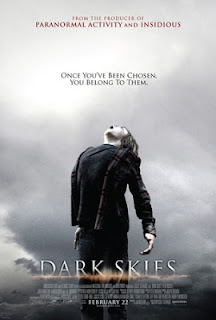 Producer Jason Blum (Insidious) makes a clear distinction between himself and Roger Corman. Roger Corman specialized in using his studio to develop untested filmmakers into seasoned directors, Jason Blum only works with established directors as he develops his brand of horror and science-fiction cheapies. So far, he’s got Paranormal Activity, Insidious and Sinister under his belt. These three are a respectable run of effective and profitable fright films. He’s got a knack for putting projects together that  have a spirit that is missing from most wide release horror films.

Dark Skies is the latest entry in this collection. In this film we have familiar Blumhouse elements; a house and a family coming to terms with the forces that have set upon them. They have real-world problems too, unemployment is pushing the family of four towards foreclosure. Unlike the other films, the threat is a different kind of otherworldly enemy. The Barrett family could be under the invasive eyes of malicious aliens.

I suppose the standard for any film of this type is whether it actually frightens the audience. I heard a couple of screams in the preview audience I saw the film with, and while there are too many “jumper” scares, a few moments are genuinely chilling. The Paranormal Activity tropes get use in Dark Skies too. Daniel Barrett (Josh Hamilton) installs a home security system in order to catch what he believes is a human intruder. These cameras play a key role as he begins to believe Lacy Barrett’s (Keri Russell) theory about the real culprits.

This is the kind of film where it could be that they are both insane, and director Scott Stewart keeps this expectation possible until the end of the film. The story grants these hostile forces nearly-supernatural powers, which is a nice evolution from the dumb but advanced beings we’re used to seeing in movies like Battle Los Angeles, Signs, or War of the Worlds (2005). Sufficiently advanced technology is indistinguishable from magic, and Dark Skies makes the mind-bending most of this.

Scott Stewart wrote the script for this film in six weeks. I don’t know why he wrote it so quickly, but the result is that there are many things which are not developed. I am not a fan of nitpicking, but there are holes in the plot that could’ve sent the film in another direction if they had been considered or explored. To say this is an alien film poured in the Paranormal Activity mold would be accurate but not entirely fair. Yet, most of the problems with the film are the result of it following the Blum recipe too faithfully.

As expected, the intrusion of the entities becomes more brazen, invasive and frightening. The problem is that in a film like this escalating thrills is taken for granted, and a savvy viewer wants these expectations thwarted. Those savvy viewers will be disappointed. The moment that did get the audience screaming was a deft use of camera misdirection. More of these tricks would have made a wholly terrifying film. If the filmmakers had taken the time to really exploit the narrative mousetrap they’d built for the Barretts the film would rival its predecessors. Too much time is spent on cheap thrills while the good stuff is glossed over.

Scott Stewart has taken a unique turn in his career to make a film like this. He was a visual effects artist before he became the helmer for the quasi-religious fantasy films Legion and Priest. Dark Skies is Scott Stewart unplugged. The cinematography is naturalistic and without any particular style or attitude. This makes the film pleasantly reminiscent of earlier shock films which didn’t have the time or money to make flashy looking films, so they had to rely on story and mood. This approach works, and at times the film has the rough-around-the-edges feel of a real independent. When the visual fireworks do happen, they nearly banal imagery of the rest of the film propels them further.

You don’t go to a film which is essentially the descendent of b-movie fifties shockers to see great performances or hear amazing dialogue. Even so, both Hamilton and Russell take the time to bring the characters worldly and extra-worldly challenges to life. They don’t become heroes larger than we can imagine, and they don’t slide into handy Spielbergian suburban archtypes either. Everyday stress creates the cracks that allow the horrors in. Maybe Dark Skies is too typical in its presentation of crisis, but it is still better than the cleaver-fodder characters in other recent horror films.

Dark Skies continues the precise soundscape work of Sinister. While it may not be clear when exactly the invaders are inside of the house, the drone and crackle which implies their presence suggests that they might be lurking in the shadows. As the final attack on the home begins, this noise was strong enough to rattle the seats and walls of the theater. This isn’t 3D, but it might be better.

The final turn of the film is not wholly unexpected, but it is a bit of a surprise and is much better established then many a horror movie denouement. Knowing fans of Blumhouse pictures will understand what kind of ending to expect, and Dark Skies doesn’t stray from that formula either. There is so much similarity between Paranormal Activity, Sinister, Insidious and Dark Skies that I expect the Blumhouse production slate might become formulaic. A subtle distinction exists between formulaic film and genre niche. Hammer Studios had its kind of formula, American International had theirs, and even the great Universal Studios had a brand formula.

Each of these studios turned out plenty of films, not all of which were exciting as the films which inspired the brand. This is where Dark Skies sits in the Blum filmography, not as great as some, but still much better than the majority of competing films in the genre. As tired as I am of the Paranormal Activity franchise, the trend towards atmospheric films is a long-awaited relief from the tedium of obvious horrors like Saw. Saw movies can be forgotten as soon as the credits roll, but there’s something about movies like Dark Skies which make you watch the shadows and walk a little faster toward the imaginary shelter of the nearest porch light.