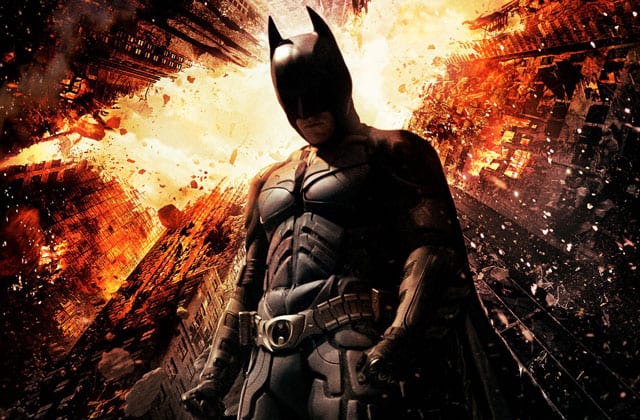 The Dark Knight Rises, directed by Christopher Nolan, is a movie of and about extremes. It is a movie that demonstrates what happens when men, cities, action and franchises are pushed toward the furthest edges of what was thought was possible and the inevitable tumble towards decimation that occurs when those edges are just underfoot. It is a movie of extreme length (165 minutes), extreme set pieces (featuring what must surely qualify as a cast of thousands), and extreme audience anticipation.

The Dark Knight Rises attempts to meet the challenges of these wrenching expectations with pure popcorn bravado. Every moment in the movie is bigger, badder, bolder and more brazen than the last. From the hauntingly acrobatic opening action sequence all the way through its final bittersweet moments of closure and discovery, The Dark Knight Rises is an exciting, thoughtful and provocative action movie that wonderfully punctuates Nolan’s vision of Batman, while also exaggerating some of the more problematic aspects of this now decade-long superhero renaissance taking place throughout our summer cinema.

For this return trip to Gotham, Nolan, along with co-writers David S. Goyer and Jonathan Nolan, drop us in eight years after the events of 2008’s The Dark Knight. Gotham has enjoyed several years of sustained peace, low crime rates, and presumed freedom from the schemes and machinations of dastardly super-villains. Batman, once again portrayed with familiar efficiency by Christian Bale, is now a recluse, physically and emotionally depleted after his violent career as a caped crusader. However, as you might expect, things don’t stay calm in Gotham for long, and once the vengeful, gas-masked bodybuilder Bane, played by the always challenging and captivating Tom Hardy, arrives within the city limits, Batman must overcome his physical and mental limitations, gather his allies and confront this new, mealy-mouthed evil.

Over the course of the movie, Batman must summon his allies (most notably, Gary Oldman’s burdened Commissioner Gordon and Joseph Gordon-Levitt’s “hot-headed” John Blake) navigate through a city filled with inscrutable strangers (Anne Hathaway’s seductively restrained Selina Kyle chief among them), and ultimately decide how far he is willing to go to save the city he had at one time sworn to defend. This journey back into the shadows is at times shocking, at times surprising, and, yes, at times a bit predictable. However, all of these events are beautifully complemented by the sheer scope of the movies sets, locations, and ambition, some of which Nolan and cinematographer Walter Pfister chose to capture in stunning 70mm IMAX format. While the plot and characters will certainly resonate with audiences no matter the viewing aspect ratio, the large format IMAX presentation does manage to amplify the grandiosity of the proceedings to dramatic effect.

However, it is that very largesse that does occasionally cause The Dark Knight Rises to creak, sometimes deafeningly, around the edges. In attempting to intensify everything that was great about his previous bat-films, Nolan also exaggerates many of the past films impediments. First, this movie is long. 2 hours and 45 minutes long. It’s paced very well, and is filled with great scenes and tense action, but there are a few moments when it seems like this Batman movie could use, well, to be frank, a little more Batman. Second, the villain’s plans often strain even the most forgiving suspension of disbelief, as Bane seems to be even more capable of planning for accident, coincidence, and happenstance than The Joker was in The Dark Knight. Bane’s schemes seem to have too heavy a dose of deus ex machina to really be believed.

Then, there’s the character’s constant consternation. While Batman Begins and The Dark Knight were so refreshing because of their ability to complement the action with strong emotional resonance, in The Dark Knight Rises, there are more than a few scenes where an actor’s waterworks, a shot’s framing, or the score are more manipulative than emotive. Also, I’ve noticed that in his last several movies, Nolan is developing a nasty habit of having characters exist for seemingly no other reason than to walk into a room and announce exposition. In this movie, that thankless job has fallen to Michael Caine’s Alfred Pennyworth, trusted Wayne family butler. Of course, an actor of Caine’s caliber is able to infuse those moments with care and humor, but it’s hard to not think that maybe his character was more perfunctory than was really necessary.

Also, full disclosure, as a lifelong, diehard Bat-fan, don’t even get me started on how this movie breaks the cardinal rule of all great capped crusader stories: Batman should never get laid! But I digress…

There is also the matter of Bane’s voice. While I think that some of the early fanboys’ concerns that it would be inaudible is actually well-founded, I thought it sounded great. It struck me as a remarkably creative mixture of Darth Vader and a Karin Dreijer Andersson song, and ended up being one of my favorite aspects of the movie. I couldn’t always understand what he was saying, but the tone and character of Hardy’s language was so wicked and degraded that just the sound of his voice complimented the menace of the proceedings wonderfully. It is a risk, and while I enjoyed it, it will certainly be a controversial point for many audience members and I can’t say for certain that they will be wrong to hate it.

Nolan and company certainly had their work cut out for them in crafting the story, themes, and vision of The Dark Knight Rises, and, if you’ll pardon the expression, they certainly rose to the occasion. With many subtle and deliberate visual and thematic callbacks to Batman Begins and The Dark Knight, The Dark Knight Rises is as satisfying and exhilarating a conclusion to the Nolan verse as one could imagine. While not without its flaws, during its final act, the movie is elevated from the morass of its own convoluted continuity into a stirring and resonant summer blockbuster that will remind fans why they care so much for a strange series of movies about a crime-fighting orphan who dresses up as a flying rodent and stalks the streets of urban America in search of a good set of fistacuffs. For some, it may not be the sequel that they wanted, but for many, after years of anticipation and expectation, it is the sequel they need and deserve.