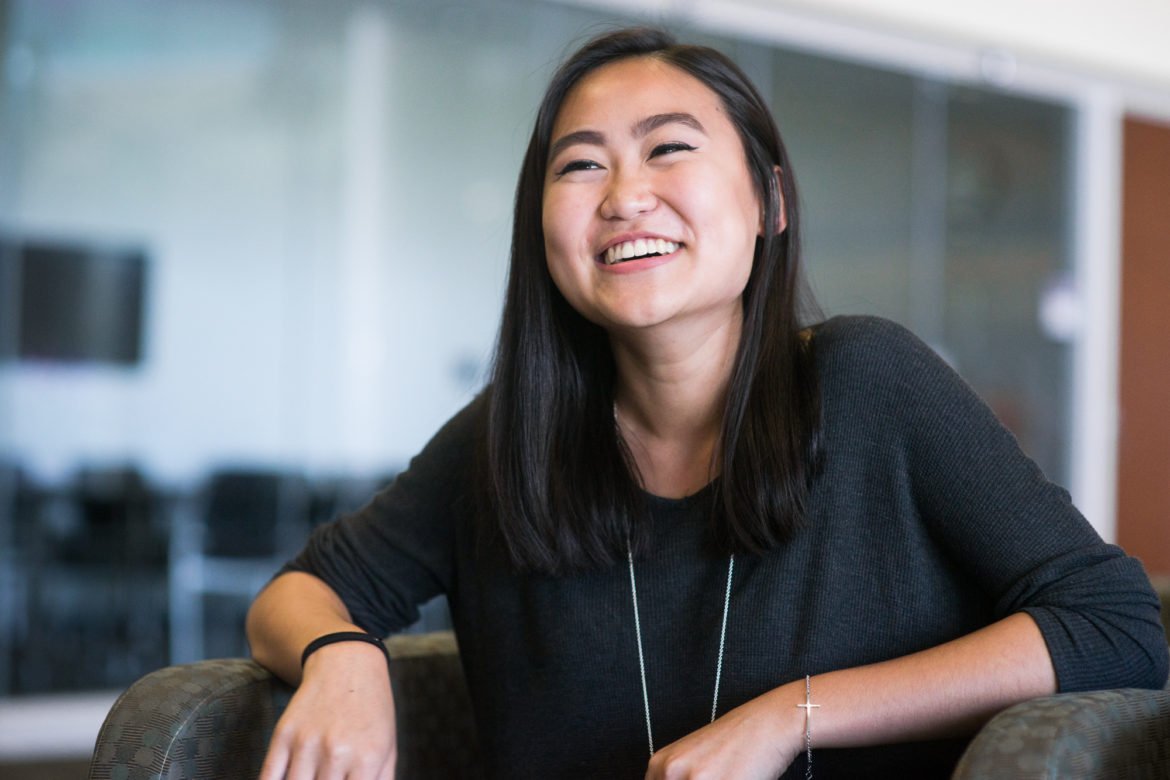 Every year, ThreeSixty Journalism, a nonprofit program at University of St. Thomas for young, journalists, designates an exceptional participant as that year’s ThreeSixty Scholar. That person receives a full-tuition, four-year scholarship to study journalism and communication at St. Thomas. This year, that honor goes to Danielle Wong, a 17-year-old high school graduate from Lakeville.

People do occasionally ask her – and her parents – how she does it.

“Definitely not by myself,” she said.

Wong insists that she’s met countless people who have taken their time to help her. But the motivation, the drive, the passion – that’s all her.

“My parents have never been the ones to push me to do something I don’t want to do – except learn Chinese,” she said.

Most people who know or have worked with Wong will talk about how young she is. She recently turned 17, but she’s already planning for her freshman year at St. Thomas, excelling at a summer internship with ThreeSixty and writing for Tommiemedia, St. Thomas’ campus news source. Most students studying journalism at St. Thomas will have to wait for their junior or senior year for the same honor. She also blogs and occasionally acts for Mu Performing Arts, a theater company that produces performances from the Asian American experience.

On top of that, she recently took the stage as the first teenage speaker at the IVEY Awards, the Twin Cities’ awards program for live theater. A last minute no-show forced her to take the stage alone and recite both her and her would-be presenting partner’s lines; she handled it beautifully.

Her mentors use terms like “poised” and “personable” and “professional” and “articulate” when they describe her communication style. She follows up, schedules her own interviews, pays attention, says “thank you.”

Wong accepts those accolades graciously, but if there’s one thing that she doesn’t necessarily like to be called on a regular basis, it’s “young.”

“I don’t think how old I am should determine how you think of me,” she said. “I don’t need that, you know? When you see me, I want people to see not that I’m Asian American, not that I’m 17, just see me for me.”

That’s really why ThreeSixty was a good fit for Wong. The program is all about allowing youth, many of whom are students of color, to refine their skills, tell their stories and show everyone what they’re capable of. They’re coming of age in a world that, for any number of reasons, may not recognize the considerable skills they have to offer.

“I absolutely think that people underestimate youth,” Chad Caruthers, the executive director of ThreeSixty, said. “Students in general and youth in general are savvy, and their capabilities never cease to amaze me.”

But that being said:

From difference, driven to make change

Highlights from Wong’s first semester at St. Thomas include courses in Spanish, communications and journalism and philosophy, but the truth is, she isn’t entirely sure what she wants to do with her considerable talent yet. For a long time, she was gearing her whole future toward international broadcast journalism, but she’s since realized that she doesn’t want to give up theater – one of her other passions. She’s still deciding what she wants to do and when.

But the thing that drives her – the reason she gets out of bed every morning and works harder than the people around her – remains the same, no matter what she does.

“I’ve always dreamed about making a difference and making an impact on the world,” she said.

That might sound like a cliche, she said, but it’s true. She believes that most of the world’s problems are based on cultural misunderstanding. She points to the prejudices Muslim Americans regularly face and the mutual misperceptions China and the United States have of one another as examples. That’s why she pushed herself to learn new languages, and it’s why journalism is so attractive to her. In a sea of misunderstanding, she can have a chance to tell the real story, set the record straight, make sure everyone everywhere can get on the same page.

“That’s what keeps me going, especially thinking about my own cultural struggle,” she said.

Like many young people of color in the United States, Wong was confronted with microaggressions before she knew the word “microaggressions.” She remembers trying to hide the traditional Indonesian dishes her mother packed for her lunches for years – swapping them out or throwing them away – before she finally came to terms with the weird looks and offhand comments and the various tiny ways she’s made to feel “other.”

Wong’s mother, Retno, is her biggest cheerleader and the packer of pretty much all of those lost lunches, and she understands her daughter’s struggle to balance her Chinese and American heritages as its own unique challenge.

“It was something I didn’t know,” Retno said. “I had to learn to accept her just the way she is.”

Rather than moving away from those uncomfortable cultural tensions, Wong trained to disarm them. She participated in the American Asian Journalists Association’s prestigious JCamp program, learning some bedrock journalism skills and even giving the student address at the end of her stay. She became an active part of Mu.

“Her understanding of and curiosity about race and how she fits into that world – and wanting to engage in a conversation about it – is so impressive,” Mu’s Artistic Director Randy Reyes said.

She also made a point of talking to Bao Vang, ThreeSixty’s engagement coordinator and accomplished journalist in her own right, about her journey as an Asian American woman in media.

“As much as people seemed excited to have me on board, there was a lot of looks like ‘who is this Hmong woman, why is she so blunt, why does she think she’s anything special?’” Vang explained. “Danielle will have to face criticism in her job, because she will be one of the few – or the only – people in the newsroom covering issues that she’s close to. There is something about people from those communities that she can shed a little more light on.”

Wong knows what she’s up against, and with that knowledge, she doesn’t look away. She scrutinizes. She observes those microaggressions – the ones directed at her, and the ones directed at others – and she moves to disarm them. ThreeSixty program director Miles Trump noticed it right away.

“I think she has an advantage in that sense that she can bring a different perspective to a newsroom,” he said, “And she wants to bring that perspective.”

Whether or not Wong decides to be a journalist, that perspective isn’t going to leave her. She’s going to find a way to deploy it, whether she’s a newscaster, and actor or anything else she sets her mind to.