But when it comes to the image of young men of color, a general perception is that too many dress in a manner that dishonors their elders and shows a lack of self-respect. There have been calls from both outside and within the community to have Black males pull up their pants and quit showing the world their brand of underwear. Several cities even have laws on the books saying as much.

But that perception of young Black males does not apply to all. And with a new locally-produced coffee table picture book, several are doing their part to erase the unflattering picture of unkempt Black men altogether. If the participants of the book have their way, they’ll be having young men cinching up their belts and wanting to be “Dandies.” 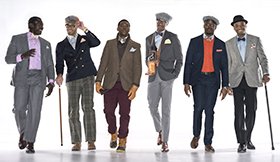 (From left to right) Dandies Amara Kamara, Byron Shannon, B Justin Parker, Chris McDuffie, Reuben Thomas and Jamel Harris walking the walk of being a Dandy.

“The Dandies Project” is a hardback, full-color photo book of Twin Cities men of color who, according to the project’s visionary exemplify class, style and sophistication. Complete with the gentlemen’s bios, the book tells a story with pictures and words.

“My inspiration was to have young men of color to serve as role models for other men of color,” said Richard Moody, who conceptualized the book. “I know what experiences we have as men of color if we don’t network collectively.” 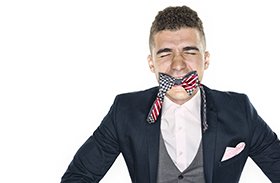 Moody, along with several other area men, took part in photo shoots displaying their unique senses of fashion. Most are donning suits and bow ties. Moody said that’s the whole point about being a Dandy.

“The Dandies Project” model, Amara Kamara, said the book and project was something he couldn’t say no to.

“I’m excited to be seen as a role model for young Black youth,” said Kamara, 46, who owns a fitness consulting business. “For me it’s all about leadership. It’s not just about the clothes. It’s about how you represent and present yourself.”

Left: Taste-maker, Nick Hooks was one of the first to sign on with “The Dandies Project.” (Photo credit: Nick Gallop)

Kamara has lived in the Twin Cities for the past 14 years and is a native of Liberia.

Fellow Dandy, Jamel Harris said he was a Dandy long before the book.

“For me being a Dandy is just about being me,” said Harris, 36, who is a model and actor. “It’s how you brand yourself. It’s having that confidence all of us Dandies in one way or another have.”

Kamara said being a Dandy is carrying on a tradition of superior dress that was in many ways abandoned.

“When I saw pictures of Malcolm X, Stokely Carmichael – (the Rev. Dr.) Martin Luther King, Jr. – they spoke before they even opened their mouths,” said Kamara. “How do we bring that back? ‘The Dandies Project.'”

The youngest Dandy, Dane Johnson, 24, said his father taught him to be a Dandy.

“My father would always put emphasis on dressing in a way that respects yourself,” said Johnson. “Being a Dandy sets a better precedent for the youth.”

According to Moody, “The Dandies Project” is going to be the basis for a program to be implemented in an area charter school highlighting the importance of personal appearance and self-respect.

Currently the book is on sale at the Minnesota Art Institute and online at www.iammoody.com.