Saturday night marked the grand opening of the Cowles Center, a new center for dance and the performing arts right in the heart of the action in downtown Minneapolis. Well, it was one of the grand openings: “the Medium-Expensive opening,” as one of my friends in the dance community put it. “As opposed to the Super Expensive opening that was [Friday], or the Free ‘Community’ opening on Sunday.”

That might sound like an unnecessarily sharp focus on money, but even more so than with the average new arts institution, money is an important part of the Cowles Center story. The project of relocating the Shubert Theatre from Block E to Hennepin Avenue began in 1998, when the U.S. was running a surplus and the money tree seemed ripe for endless shakings. The past decade, however, has not been quite so flush—making it all the more impressive that the project leaders managed to raise a total of $42 million to move the theater (the Shubert now holds the Guinness record for heaviest building ever moved on rubber tires), completely renovate it, and connect the theater with the neighboring Hennepin Center for the Arts to create the new Cowles Center for Dance and the Performing Arts.

“Only in Minnesota could this have happened,” executive director Frank L. Sonntag reported on Saturday that National Endowment for the Arts chair Rocco Landesman told the Friday night crowd. Whether or not that’s true, the Cowles’s construction is an extremely impressive achievement and makes a dramatic new high-water mark for the long-underappreciated dance community in the Twin Cities.

As redesigned by Miller Dunwiddie Architecture, the joint is fancy—though the multihued façade is much more distinctive than the interior, where the Shubert’s surviving proscenium and Grecian columns now float among plain panels in blandly corporate shades. “It’s like a bank bought a theater to move their bank into,” I heard one attendee say. Opinion was divided on the thick silvery curtain, but I couldn’t find anyone to disagree with me that the Helvetica signage and tacky faceted-sphere light fixtures outside the door to what is now called the Goodale Theater uneasily combined the aesthetic of project sponsor Target with that of the company’s predecessor, Dayton’s department store.

The opening of the Cowles Center dramatically raises the profile of dance in the Twin Cities. Formerly, to see the best local dance performances you’d likely find yourself on a college campus for big name out-of-town artists (the U’s Northrop Auditorium, or the O’Shaughnessy at St. Kate’s); in a funky indie theater in a Minneapolis neighborhood (the Southern or the Ritz); or in an art museum (the Walker Art Center’s McGuire Theater). The Cowles Center gives dance a downtown base alongside those for theater (the Guthrie, the Hennepin Theatre Trust properties), music (First Ave, Orchestra Hall), and literature (Open Book).

It’s a tremendous achievement, and an important new cultural institution. But some members of the local dance community are wondering what the effect will be of the glittery new Cowles Center replacing the Southern Theater as the most visible, active hub for dance performances by local artists.

For nearly 30 years, the Southern stood as not just a site for dance performances but as a programmer and presenter. Under the longtime leadership of Jeff Bartlett and in cooperation with local institutions such as the Walker, the Southern fostered a diverse local dance scene—including both major companies and independent choreographers. Earlier this year, however, the Southern as an organization imploded under the weight of a cash crisis years in the making; it continues to host performances, but only as a rental house. 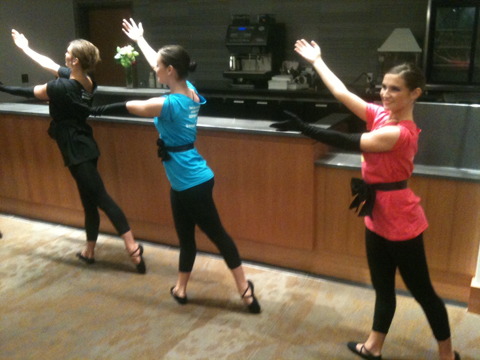 There are certainly great possibilities. The renovated Shubert is no Big Blue, but reportedly the Cowles leadership has considered the possibilities of the Target Education Studio as a black-box space for smaller shows. Saturday night’s gala even made creative party-room use of the loading dock space (“I hope there’s a Helvetica sign that says ‘Loading Dock,'” said one gala-goer as a quartet of performers danced us down the hall).

Even if many local dancers and choreographers were wondering about the future, there’s no question that on Saturday night they were enjoying the present: this moment when dance is grabbing the Twin Cities’ attention in a way that it never has before. Dressed with typical flamboyance—you ought to need a license to own some of those sportjackets—dancemakers and dance fans sat together in the Goodale Theater for a presentation filled with moments ranging from the silly (a belated entrance by trumpeters on high, outfitted with safety harnesses to keep them from falling off the light rigging) to the scintillating (a solo tap performance by Savion Glover) to the sorry (an absolutely ridiculous cowboy-styled dramatization of Leonard Cohen’s “Hallelujah” by Minnesota Dance Theatre) to the sublime (a thrilling performance of choreographer Daniel Charon’s Storm by a supercharged Zenon Dance Company).