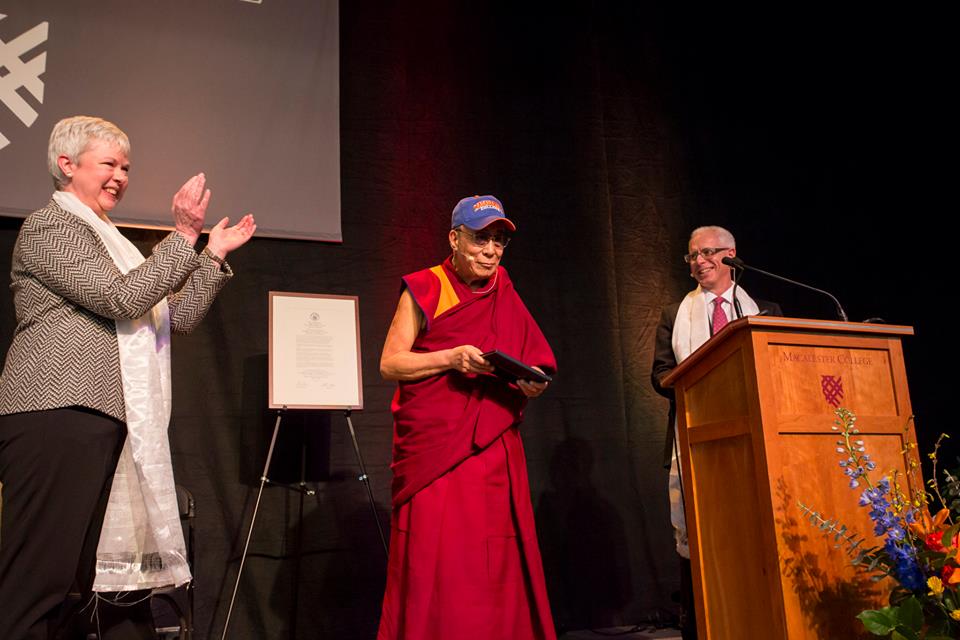 This morning all my social media feeds are full of photos of His Holiness the Dalai Lama wearing his usual monastic robes—plus a blue Macalester baseball cap. Yesterday, President Rosenberg and Provost Kathleen Murray presented the Dalai Lama with an honorary degree, along with the hat, which he gladly wore throughout his lecture to 3,500 students, staff, and faculty.

Saturday, His Holiness attended the Nobel Peace Prize forum in Minneapolis. The idea that  he agreed to spend the next afternoon with us makes me smile. Before his talk to the entire community, he held a private audience with the neuroscience capstone class. The Dalai Lama has a special interest in looking at how Western science is similar to Buddhist philosophy, and more generally, how science and compassion might develop in harmony. He sees this harmony as the key to a nonviolent 21st century. And, he wants us, the world’s young students, to make this happen. “I really feel that you are the shaping force of a new world,” says His Holiness.

His talk was, above all, a call to action for all young people. Yes, when His Holiness walked onstage, the room fell into one of the deepest silences I’ve ever heard. Yes, just the sound of his laugh delighted the audience into laughter. But the afternoon was about more than just the starstruck awe of having a world leader in our midst. I walked away with the sense that I truly could be the change the Dalai Lama was calling for. Even though I’m not a neuroscience major or a Buddhist philosopher, I can unite ethics with education and compassion with global consciousness.

Students created a number of pre-visit events to share what they knew about His Holiness’s historical and political context. In this way we helped each other get the most out of the Dalai Lama’s talk. My friend Sarah Fleming, who attended Emory University’s Mind/Body Sciences program in Dharamsala, held an informal discussion group at her house. Sarah knew that the Dalai Lama’s address to the Macalester community would probably concern his vision for Mind/Body Sciences, which investigates the link between Buddhist practices of compassion and better medical treatment. 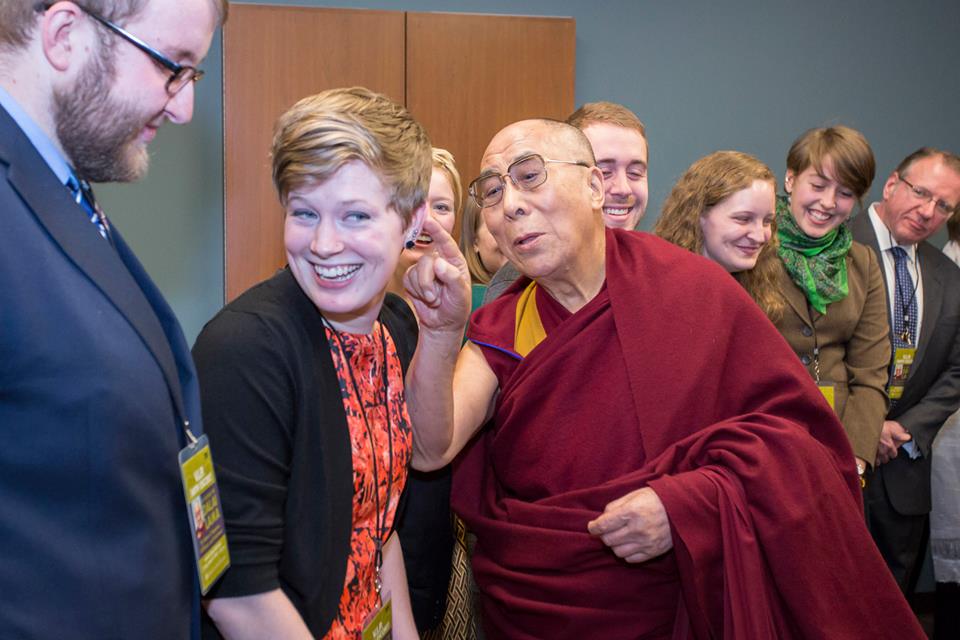 Relaxing on Sarah’s couch, our winter gear piled by the front door, we students—who came from many different spiritual and political groups on campus—pieced together the history of the Tibetan conflict.

Along the way we learned a lot from Sarah—including that the Dalai Lama’s monks enjoy a good debate, a game of badminton, and Facebook—but we brought our own diverse perspectives as well.

Sarah and Izzi Speer, who was also on the Emory exchange program, also spoke on a discussion panel hosted by the college’s Center for Religious and Spiritual Life (CRSL). Other panel members included Emily Wade, who spent a semester in Dharamsala working with the Tibetan Nuns project, and the co-chairs of Students for a Free Tibet. Religious Studies Professor Erik Davis, whose Introduction to Buddhism is always one of the first courses to fill up each year, shared some thoughts about the pairing of Western science with Buddhist philosophy. He encouraged us to remember that this juxtaposition has a rich history, going back as far as the Enlightenment.

This discussion was standing-room only, which is one of the things I love about the Macalester community. In our busy lives, with midterms closing in, it would be easy to just go hear the famous person speak and skip the rest. But my fellow students consistently make time for these extra learning opportunities, determined to wring all they can out of any potential learning experience.

When we show our families pictures of His Holiness wearing our school’s baseball cap, we won’t just get to say that we were there. We’ll get to say we made it count.