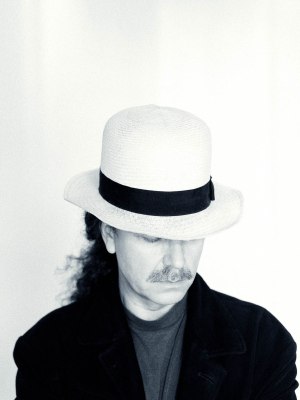 Chicago-based new music ensemble Dal Niente will be performing the music of Scottish composer James Dillon at the Southern Theater on April 3.

Given James Dillon’s international stature in the world of contemporary music, the fact that he hangs his hat (pictured) in Minnesota has elicited remarkably little comment: You’re as likely in the foyer of Wigmore Hall as in the lobby of the Ordway Center to be met with a quizzical look if you claim to have spotted the eminent Scottish composer on the West Bank here in Minneapolis, the site of Dillon’s day gig as a Professor in the University of Minnesota School of Music. Dillon’s work, renowned for its vivid contrasts of the sensuous and the tempestuous, came to prominence in Europe in the early 1980s; his Nine Rivers, a large cycle of works composed over more than ten years, received its much-delayed premiere last year in his hometown of Glasgow.

Performances of Dillon’s music by American ensembles have been relatively rare in the Twin Cities since he moved here in 2007; however, the Chicago-based new music group Dal Niente is presenting a portrait concert comprising five of Dillon’s chamber and solo pieces on April 3 at 7pm at the Southern Theater. Dal Niente is earning an international reputation of its own: The ensemble, founded in 2004 by composer and University of Minnesota alumna Kirsten Broberg, recently won a prestigious Kranichsteiner Stipendienpreise at the Darmstadt Ferienkurse für Neue Musik. One could hardly ask for more suitable navigators through Dillon’s famously elemental music than these fire-bellied young musicians.

If you’re thirsty for more new music offerings in the Twin Cities this Spring, the Contemporary Music Workshop, Dillon’s brainchild at the U, will be giving a program of works by Arnold Schoenberg, Schoenberg’s son-in-law Luigi Nono, and Nono’s student Helmut Lachenmann on May 4 at University Lutheran Church of Hope.