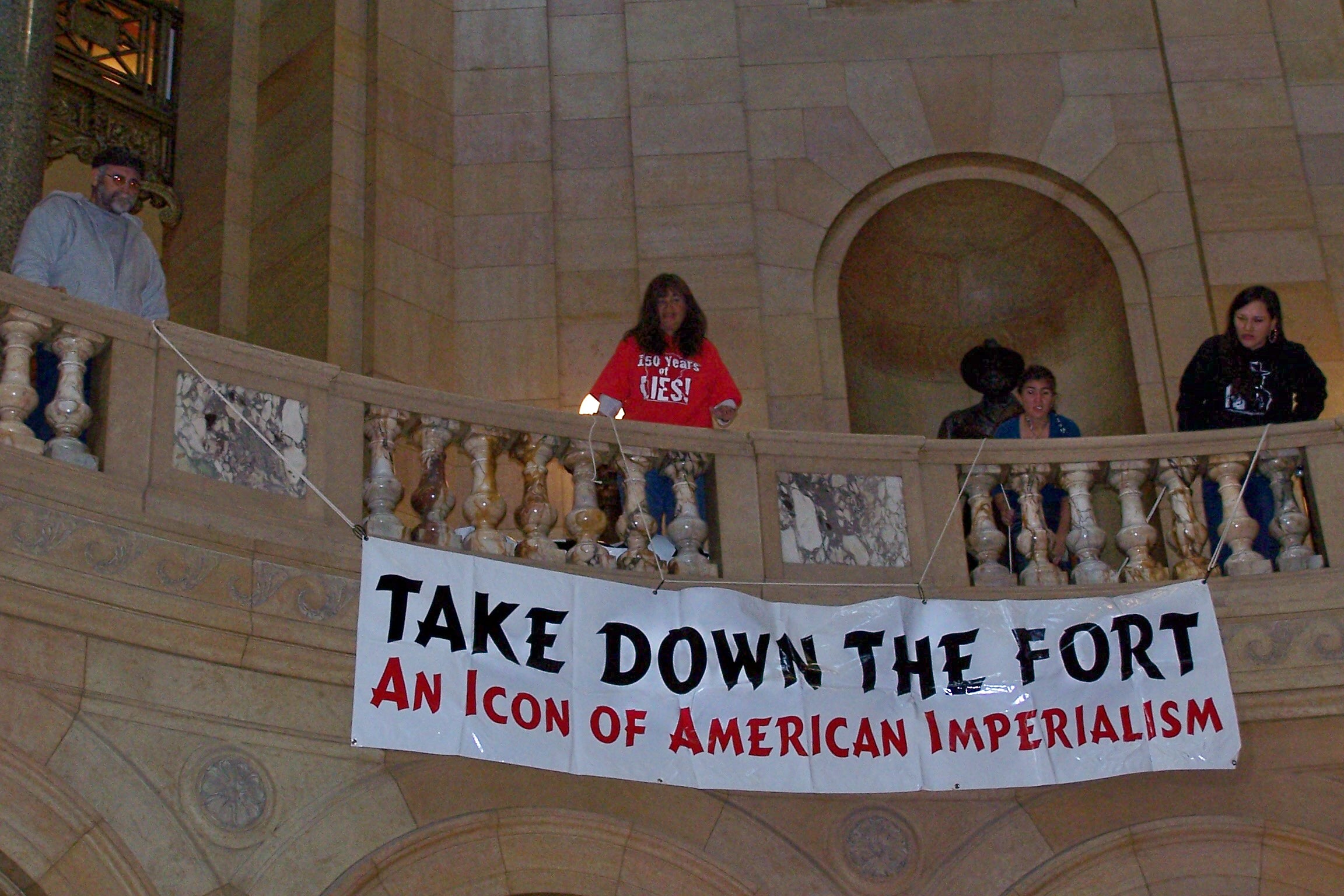 St. Paul, Minnesota — About 20 Dakota activists and supporters interrupted the Minnesota Historical Society’s “Rally for History” this afternoon at the state capitol. Protesters are challenging the proposed funding for the renovation of Historic Fort Snelling, the site of a 19th century concentration camp where several hundred imprisoned Dakota people died of starvation and disease while 1,600 were held by US troops during the winter of 1862-1863. Protesters say that by choosing to preserve the fort, Minnesotans are choosing to celebrate a symbol of violence against native people.

Activists with the Take Down The Fort Campaign unfurled several banners above and in front of the podium, and denounced Fort Snelling as a symbol of genocide while the speakers pressed on with their rally.

Moments before the protest and just down the hall, governor Pawlenty released his supplemental budget which detailed almost $600 million in cuts combined for local government and state welfare and health programs.

What stands at Fort Snelling is not the original structure but a replica. Modeled after its 1820s condition, Fort Snelling was rebuilt after it was declared a historical landmark. The replica is crumbling and the Minnesota Historical Society wants Minnesota tax-payers to foot the $6.7 million bill to rebuild the structure at a time when state social services and education system are on the chopping block.

One protester expressed her outrage “How can we justify funding the renovation of a concentration camp, when we don’t even have money for schools or social services?”

“This area the Dakota refer to as Bdote, Mendota in English, is the site of both Dakota genesis and genocide. The Bdewakantunwan Dakota creation story places Dakota origin at this specific site.

Yet, Fort Snelling is also the site where white Minnesotans imprisoned about 1,600 Dakota people primarily women and children, during the winter of 1862-63, consequently killing about 300 of our ancestors.

Given this deep history, it is appropriate for the Minnesota Historical Society to eradicate the fort and return this sacred site to Dakota control.”

Today’s protest marked the third consecutive year Dakota activists have made their presence felt at “History Day at Capitol”. Last year, an 18 year old Dakota youth was arrested for disorderly conduct though her charges were later dropped. This time around, there were no arrests made.