Speaking to hundreds of progressive activists in St. Paul on Saturday, the highest-ranking officer of the Communications Workers of America outlined an aggressive vision for building “a grassroots movement for democracy like we’ve never seen in this country.”

Larry Cohen, president of the 700,000-member CWA, employed the rhetoric of Occupy Wall Street to fire up the crowd. He railed against the influence of corporate cash in politics, and he linked the labor movement’s effort to build economic justice with the Occupy’s call for democratic renewal. 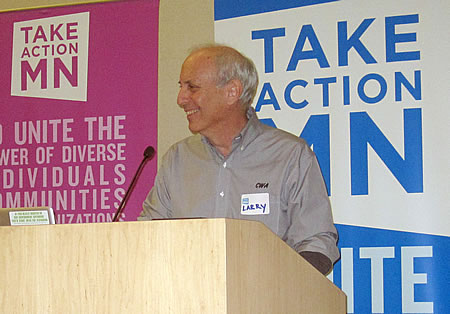 “Our goal, whether it’s in the CWA or in the new partnerships we forge, is to think of ourselves as the 99 percent.”

That new identity will be put to the test in 2012, as national unions like the CWA revive their grassroots political programs.

In states like Minnesota, union volunteers typically make up the backbone of the Democratic Party’s ground campaign. They fill phone banks for labor-endorsed candidates and canvass neighborhoods to get likely voters to the polls.

But Cohen, who is a member of the Democratic National Committee, acknowledged labor’s influence within the party has been eclipsed in recent years by deep-pocketed corporate contributors. He pointed to Democrats’ failure to pass pro-union legislation like the Employee Free Choice Act, which would remove many of the obstacles workers face in organizing unions, when the party controlled Congress two years ago.

“We can’t go through the motions and say to our members, ‘This is the most important election ever,’ when we know full well that in 2008, that’s as high as we can reach,” Cohen said. “But because of things like the Senate rules and the grip that corporations have, we did not accomplish the agenda that this president was fired up to take on.

The causes unions and progressives stand for – from economic justice to energy independence – won’t be won, Cohen said, without a wholesale restoration of American democracy first. He took aim at three specific problems: the influence of money, the U.S. Senate rules and voter suppression.

Because of archaic rules that govern their chamber, senators are able to “stick up their hands and block everything we want to do in terms of economic justice in this country,” Cohen said. Meanwhile, he added, corporate-funded interest groups across the country are seeking to divide workers by sponsoring attacks on voting rights, immigrants and public employees’ bargaining rights.

But Cohen saved his harshest criticism for the U.S. Supreme Court’s Citizens United decision, which struck down campaign-finance laws aimed at keeping corporate cash out of elections – and “created the farce that corporations are people,” Cohen said.

“The corporate agenda is not just to take over both parties and win the elections, it’s to smash any rights on the job, it’s to make sure the Bill of Rights never makes it to the workplace door, it’s to make sure any of you who stand up wherever you work and organize, that you are shot down,” Cohen said.

“We know what democracy looks like,” he added. “We know what we have to do to build it here. We have to link together the fight for economic justice with the new democracy movement.”

Cohen was the keynote speaker at the annual meeting of TakeAction Minnesota, a community organization dedicated to building social, racial and economic justice statewide.