LGA—-Local Government Aid—has been called government welfare, a dependency on the state, an enabler for cities to overspend. And for Minnesota mayors, them’s fighting words.

“Where people would like you to think that it’s government welfare to the cities, schools and counties, it really isn’t,” said Cloquet mayor, Bruce Ahlgren. “This is money that we collect, send to the state, and they promised that they would actually send some of it back in the form of local government aid.”

“For a generation, Minnesota communities have been stronger because the cities and the state have had a partnership to keep property taxes under control, and to provide local services,” said Minneapolis Mayor R.T. Rybak.

LGA cuts are not just a big city issue. Small cities all across the state are also taking big hits. For many small cities, LGA makes up a majority of their revenue – some cities as much as 87 percent, so even small reductions in aid can be significant. Funding to cities across Minnesota has decreased dramatically over the past decade, and it’s becoming an increasingly partisan issue as illustrated by the debate on the House floor over the most current House bill.

The latest House Tax Omnibus bill making its way through conference committees at the Capitol phases out LGA entirely by 2015 for the cities of Minneapolis, St. Paul, and Duluth. The Senate version of the bill does not eliminate LGA completely for the three cities, but extends the temporary reduction in funding that was enacted in 2010 to balance the budget.

So how exactly did we get here?

As Minnesota mayors remember the birth of LGA, it all started with a promise, and an understanding that we’re all in this together. Forty years ago, the Minnesota Miracle put into place major state fiscal reform, and is commonly believed to have given birth to what is now known as LGA. It was a time of extreme haves and have-nots. Mounting public discontent over soaring property taxes and huge disparities in public school funding and between rich and poor cities led to the bi-partisan reform – a reform that was led in large part, by a group of Republicans.

Rachel Walker, policy analysis manager for the League of Minnesota Cities, says the earliest history of LGA  dates back to 1967 when the state passed the Tax Reform and Relief Act, which established a new state aid program for local government.

Cities paid sales taxes to the state, and gave up a local sales tax in exchange for getting a portion of funding back in the form of LGA. The funding was dispersed throughout the state to maintain property tax fairness, while assuring the same basic level of public services like police and fire protection, safe roads, clean water, libraries, and parks, throughout the state.  Basically, LGA bridges the gap between a city’s need and its ability to raise revenue.

Minneapolis Mayor R.T. Rybak is quick to emphasize that Minneapolis is a net contributor to the state.

“One legislator told me that Minneapolis was dependent on the state, but on a lot of levels, it’s the other way around,” said Rybak. “If Minneapolis simply kept our sales tax and commercial property tax, and told the state to keep their local government aid, we’d be $400 million ahead. But the reason not to do this…is the realization that we’re in this together.”

Walker says one reason that the argument about sales tax contributions might be falling on deaf ears is that there’s no longer a direct pipeline from the sales tax collected to the money going out to cities in the form of LGA.  There were a couple of times during LGA’s history that a sort of government “trust fund” existed, but the most recent – the Local Government Trust Fund – was dissolved in 1996. Today, the state sales tax collected by cities goes into the state’s general fund like all other revenue, and LGA is paid out like other programs.

Just how the state arrives at what dollar amount a given city receives has also become complicated over time.  While it originally started out as a per capita funding program, the LGA formula changed several times over the years.

Currently, the formula factors expenditure needs like age of housing stock, population decline, household size, traffic accidents per capita, and whether it’s a metro or greater Minnesota city. It then calculates unmet need by looking at population, expenditure needs and tax capacity.

There are about 100 cities that do not receive LGA funding, said Walker.

“They tend to be metro suburbs like Apple Valley, Edina, Bloomington. The formula looks at cities and weighs their need for revenue versus what they can generate on their own based on their tax base. For example, Bloomington has the Mall of America, which provides a huge tax base for the city – so that’s one example of why their tax base is judged,” she said.

After the formula is calculated, the final per capita LGA amounts vary widely. All city and county LGA amounts for 2002-2010 are available on the House of Representatives website. Here are a few examples: 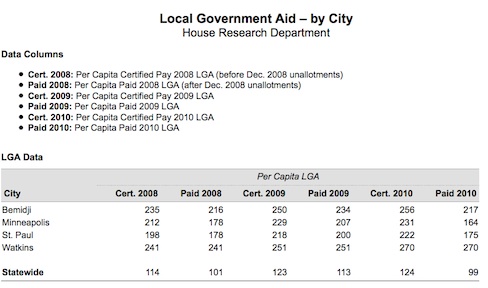 While the per capita amounts for Bemidji and Watkins are larger, the total amount of LGA for the smaller cities is not. Multiplying the lower per capita rate by the larger population of Minneapolis and St. Paul means that they get much more money.

The fact that Minnesota’s largest cities get the biggest piece of the LGA funding pie, coupled with an ever-changing formula, may be at the heart of the controversy over LGA.

“Ever since there’s been a formula, it’s been complicated mathematically, and people don’t always see the relationship between that formula and running a city,” said Walker. “The formula is something that’s always raised a lot of questions.”