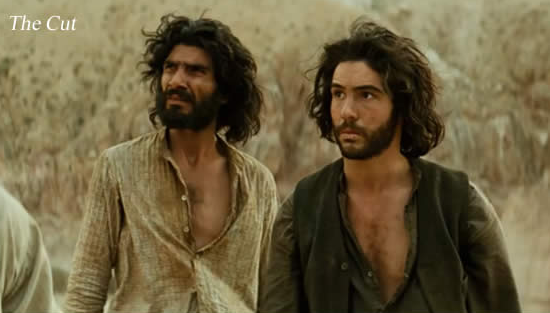 Editor’s Note: This is second in a series of Minneapolis Saint Paul International Film Festival “citizen reviews”. This one comes on the 100th anniversary of the Armenian Genocide that took place in the waning days of the Ottoman empire in Turkey. The review of The Cut comes from Lou Ann Matossian, who has been working to raise awareness about Armenians who survived and the events leading up to the Armenian Genocide. She also helped director Faith Akin scout locations here in Minnesota, where some of the events in the film take place. In this article, Lou Ann explores the film’s Minnesota connections

“Once upon a time / Once upon no time”—the opening words of The Cut evoke a storyteller’s traditional formula in both Armenian and Turkish. In this tale of a long-silenced crime against humanity, German/Turkish filmmaker Fatih Akin claims his own creative voice amid competing narratives of affirmation and denial.

The Cut begins a century ago in Mardin, then a Catholic stronghold in disintegrating Ottoman Turkey, now a border town just north of the murderous, self-styled Islamic State. Time is suspended as a historical map of the region dissolves into flames; the red-hot end of a metal bar appears; a broad knife is sharpened in near darkness. Even the film’s title font, designed to evoke the 1600-year-old Armenian alphabet, appears to bristle with bloody hooks.

The tools belong to blacksmith Nazaret Manoogian, who is shortly to lose his family, faith and voice in the Armenian Genocide. As a viewer, I’m already tense, knowing all too well about the near-extermination of my people.

“The tanner’s knife is a circular affair, while the butcher’s knife is a small axe,” reported St. Paul–born missionary-educator Frances Gage, the YWCA Secretary for Turkey in 1915. Mustered out on massacre duty, such tradesmen “killed people by using the instruments which they knew best how to use.”

Dr. Daniel Thom, a medical missionary from Owatonna, Minnesota, had served the people of Mardin for more than 40 years when the slaughter began. An eyewitness who tried to help Armenians, Dr. Thom was expelled on a day’s notice; two weeks later, having passed hundreds of corpses on the road of exile, the physician fell victim to typhus. “As he was over seventy

years of age and not in vigorous health,” reported U.S. Consul Leslie A. Davis, “I have no doubt that his death was indirectly due to his enforced departure from Mardin.”

Normally I don’t watch violent films. How will I sit through the deaths of 1.5 million—the outright massacres of Armenian men, the brutal attacks on Armenian women and children?

While The Cut does not shrink from violence, such scenes are made bearable because Akin, unlike some Hollywood directors, does not assault the viewer with gratuitous gore. Indeed, time and again, Nazaret must confront his own murderous rage at what has happened to him. Although powerless to stop the genocide, he will make choices that ultimately determine the fate of his individual humanity.

I also want to learn better how to tell this story. Just 200 miles west of Mardin, about the same distance as Fargo from Minneapolis, my own grandparents survived a death march to Aleppo in the heat of summer. How does a film convey this reality with enough context for general viewers, enough accuracy for historically minded Armenians, and enough drama to engage us all?

Akin’s solution is a universal and timeless narrative—the story of a refugee fleeing from mass violence, of a father desperately searching for his lost children. Nazaret’s odyssey takes him from the desolate wasteland of the Syrian desert to the equally desolate North Dakota prairie, passing en route through Lebanon, Cuba, Florida and Minneapolis. Confronted with sexual violence against indigenous women—an Armenian in Turkey and a Native American in North Dakota—Nazaret’s very different responses show us how far he has come.

Although filmed in Canada, the Minneapolis scenes are an imaginative amalgam of St. Paul’s Lowertown and the Minneapolis Warehouse District, where (full disclosure) I once escorted the filmmaker and his crew on a historical tour of Twin Cities Armenian haunts. They even visited the Faribault Woolen Mill, then shuttered and facing an uncertain fate.

It was here, as well, that Akin met descendants of a North Dakota family whose story closely parallels Nazaret’s own. By 1925, newly tightened immigration quotas had made it nearly impossible for Armenian refugees to enter the United States. From Jamestown, North Dakota, Northern Pacific Railway section hand Melkon Abrahamian traveled all the way to Havana in search of Khatchkhatoon, his future wife. Following their marriage in Cuba, the Abrahamians took the train from Key West via Minneapolis to Jamestown: their relatives can still be found in North Dakota and the Twin Cities.

Train travel punctuates every chapter of The Cut, and with good reason. Prewar Armenian immigrants like Melkon laid track across the Upper Midwest. Back home, during the Genocide, Armenian men were used as slave labor on train and road gangs, then eliminated. In some areas, Armenians were jammed into cattle cars heading toward the Syrian desert. At the close of the film, a Sault Ste. Marie rail car at rest on a spur of track signals the end of Nazaret’s journey.

In a speech from about 1907, now preserved in the Steele County Library, Dr. Daniel Thom confessed that even after 33 years as a missionary, “I am yet able to laugh, and I am going to continue to laugh until I pass through the pearly gates of the New Jerusalem and I am sure I shall laugh there.”

The few moments of laughter in The Cut are never far from tears. But,like a magnolia blooming after a Minnesota winter, they inspire passing travelers to keep the faith.

More information about the film can be found here