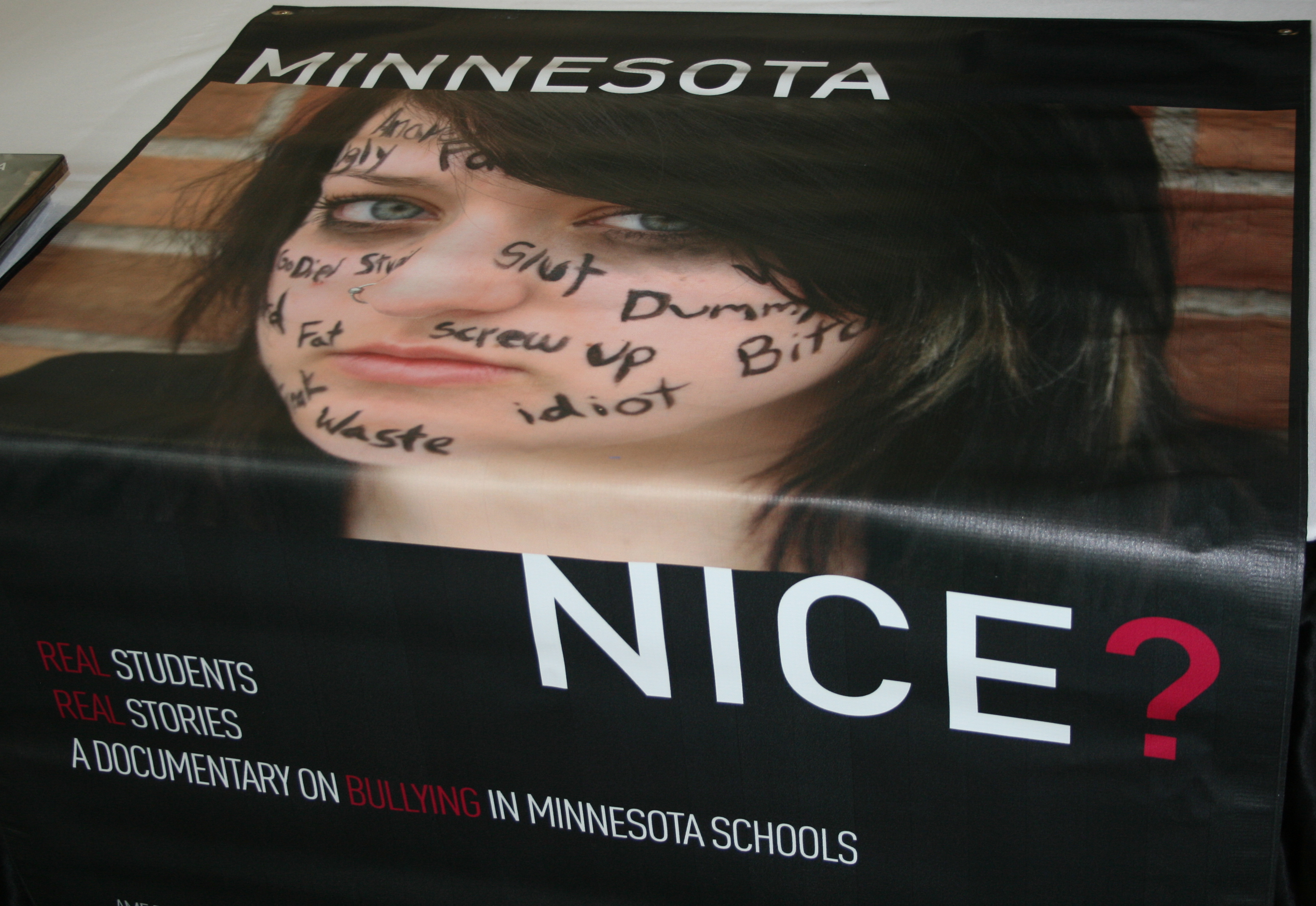 Close to 250 people gathered in St. Paul on January 18 for the second annual Cultivating Respect: Creating Safe Schools for All Students conference. Organized by the Twin Cities chapter of PFLAG (Parents, Families, and Friends of Lesbians and Gays), the day-long event featured presentations and breakout sessions, followed by an awards dinner and entertainment in the evening. Hamline University’s Hedgeman Center for Student Diversity Initiatives and Programs hosted the conference, donating space at the campus’s Anderson Center to PFLAG. 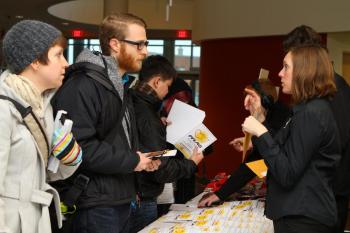 PFLAG-Twin Cities president, Carol Curoe, said that last year’s conference demonstrated the importance of holding such gatherings. It came together as stories about teen suicides in the Anoka-Hennepin School District were making the news. “There is nothing else like this for teachers. It has broad-reaching impact by helping the adults that interact with students everyday.” She siad that PFLAG’s conference committee, comprised of board members, parents, teachers, coaches, and allies, “is passionate about creating safe schools.”

This year’s Cultivating Respect conference, “kept some of the really popular workshops, like those focused on helping understanding transgender concerns.” It also added a new focus — sports. Curoe noted, “The locker room is the last place in schools to open up the door, and ask, ‘What’s this homophobia all about?’ Especially in tough, macho sports, it’s not cool to be gay.” Coaches and teachers, “can’t be everywhere,” to monitor and intervene when bullying and name-calling occur. 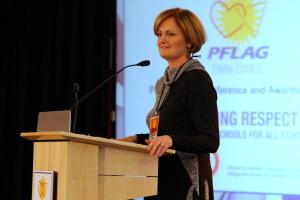 As conference committee members learned about Patrick Burke and his You Can Play Project, they realized that things were shifting in the world of professional sports, and that those changes were beginning to trickle down to high school and college athletics. “There seemed to be some good energy around things that were happening.”

Greater awareness, but room for growth

That conversations about homophobia in sports are taking place, and projects like Burke’s are popping up, is a reflection of broader changes in the schools, said Curoe. “There is definitely more awareness. People are coming out at younger ages. There are more schools sponsoring GSAs (Gay Straight Alliances).”

Still, there is much work to be done. For one thing, “Not enough schools have GSAs.” Curoe thinks that only about 25 percent do. Nor do all schools have staff who are, “willing to stick their necks out,” like Breck School’s John Bellaimey. Breck’s chaplain has been GSA advisor at the school since the mid-1990s and played a significant role in that school’s hockey player, Nick Kleidon‘s coming out. 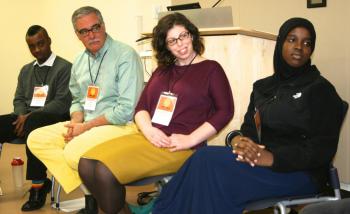 Especially challenging for schools today are issues of gender identity, reported Curoe. “That’s the tough one.” Parents and teachers are “trying to find the language” and come to better understand the various ways that students define their gender identities, especially those identities that don’t conform to societal expectations of what it means to be a boy or girl, woman or man.

Bullying not going away

One of the day’s recurring themes was that bullying and harassment, both physical and emotional, in person and in cyberspace, remain a common experience for far too many students. Studies show that this impacts LGBT student performance. For example: 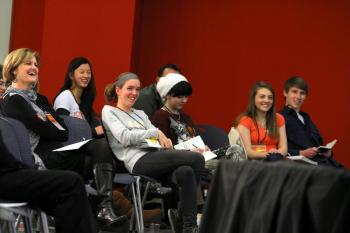 PFLAG-New York City reports that gay teens are more than eight times more likely to report having attempted suicide and three more times likely to use illegal drugs than their straight peers. Between one-quarter and one-half of homeless youth are reportedly lesbian, gay, bisexual, or transgender, living on the streets because of their sexual orientation or gender identity.

Allies can save lives

While kids who engage in banter and name-calling may say that labeling something “gay” doesn’t mean anything, Dr. David M. Hall, the conference keynote speaker, disagrees. 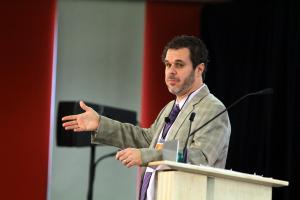 Hall, much of whose work deals with bullying, claimed that too many kids continue to “suffer and suffocate from the walls of isolation.” He said that being barraged by a steady stream of casual references to “This school is so gay,” or “This homework assignment is so gay,” takes its toll. It illustrates the connection between language and privilege.

Who names whom is an indication of power. If your identity is used as a putdown, that reveals a lack of institutional power.

Once Hall began doing more work as a corporate trainer, he said it became clear to him that the culture of corporate America is changing more rapidly around LGBT issues than it is in schools. He now recommends that schools turn to select corporations as models of more inclusivety.

Privilege plays a role in schools, he observed, when administrators fail to see discrimination or harassment based on sexual or gender identity due to privileges that they have. Heterosexuals in this society are privileged because they never have to think about whether they’ll be comfortable appearing in public with their partner–or showing affection–in this place or that.

In addition, now that there are more positive examples of kids who are out, having a good experience, some school personnel may choose to focus attention on signs of progress, turning their attention away from ongoing challenges. “Teachers can be noble or do great damage,” Hall said. 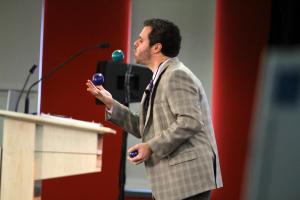 Hall argued that for LGBT students to reach full acceptance—“to feel fully respected, included, loved, and cared for”—leadership, thoughtful critique of school culture, and an awareness that allies save lives, are all required. He said that he’s encouraged to see LGBT kids “building bridges of support,” adding, “It used to be that gay kids didn’t break out of their own group.”

Because most bullying occurs outside of the classroom, away from the watchful eyes of teachers, coaches, and principals, more efforts must be made to teach and empower allies, especially peers, with skills to intervene whenever they witness bullying. Hall contends that bullies want negative attention. Focus, he said, must shift to the victim. 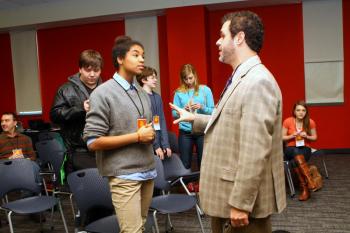 An afternoon breakout session featured four panelists who are introducing new safe schools legislation during the current session. The 2013 Safe and Supportive Schools Act is based on a report by the Minnesota Governor’s Task Force on the Prevention of School Bullying. 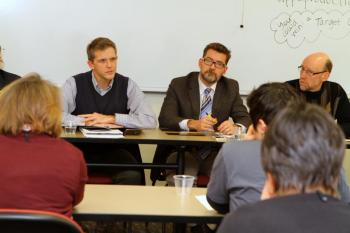 According to the Minnesota Safe Schools for All Coalition:

The 2013 Safe and Supportive Schools Act addresses and includes key measures that are missing in Minnesota’s current law. It provides definitions of bullying, harassment, and intimidation. It also makes explicit protections for students with characteristics that make them more likely to be targets of bullying and harassment.

The 2013 legislation would establish a system to track incidents of harassment statewide so that troubled areas are identified and evaluators are able to determine where prevention efforts are and are not succeeding.

The Safe Schools for All Bill was first introduced during the 2009 legislative session. It passed the House by a vote of 95 to 39, the Senate 46 to 8, but was vetoed by Governor Tim Pawlenty.

Roberts stressed the importance of conveying the message that this law is about the safety of everybody in school settings, not just one particular group. Davnie noted that since 2009 the circle of support has grown to include new allies, such as parents of disabled children, who recognize that bullying and other forms of harassment and intimidation are issues for their kids, too.

The two legislators are optimistic that with new allies, a supportive governor, and colleagues such as Rep. Carlos Mariani (DFL-65B) and Sen. Patricia Torres Ray (DFL-63) taking up the charge, the Safe and Supportive Schools Act will become law.

Carol Curoe has been active in the PFLAG since 2007, when she and her father co-authored a book, Are there Closets in Heaven? A Catholic Father and Lesbian Daughter Share Their Story. The book became a source of controversy when Minneapolis-St. Paul Archbishop John Nienstedt pressured Minneapolis’ St. Frances Cabrini Church to cancel Carol and Robert’s planned talk. Curoe said that:

PFLAG was very important in my parents’ journey of learning to understand, accept and then advocate for their lesbian daughter; it’s very meaningful work to be able to help others along the way.

Awards dinner honors those working to make schools safer for all

The day-long conference was followed by a reception and awards dinner, all organized by event magagment and production company Stagetime Productions. These were the 2013 awardees: 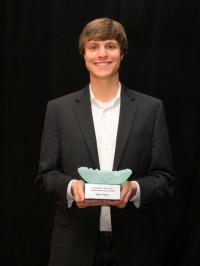 Alec Fischer with his award

In February, the PFLAG-Twin Cities conference committee will conduct a lengthy debrief of the 2013 Cultivating Respect conference, and begin the process of planning and selecting a theme for 2014.

CORRECTION – 1/30/2013: The Twin Cities Daily Planet has learned that Nick Kleidon was a member of the Breck hockey team, but not its captain. This misinformation, drawn from several published sources, is something that Kleidon has been trying to correct for some time. The article has been revised to reflect Kleidon’s actual status.