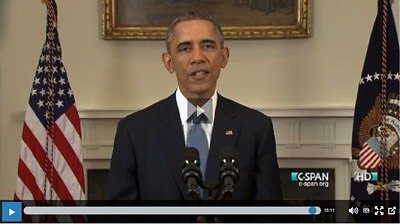 The thing about inertia is that it isn’t indefinite. It lasts only until acted upon. So sanctions on Cuba have been sustained by inertia, but now have encountered a countervailing force, a realistic president. C-SPAN has President Obama’s statement. Of course, some find it more fun to switch off C-SPAN and watch the nonsense flow on Fox News, where the first reaction when the president was done speaking was that Cuba once pointed missiles at us. Yes, in October 1962. I guess the Cuban Missile Crisis hasn’t ended in some heads. Oh yes, the supported an invasion of Cuba by Cuban exiles the year before, but Fox left that out.

I was amazed when one of that Fox talking heads — I didn’t catch the name, someone on Outnumbered — said she had brought up Cuba’s human rights abuses. Well, maybe some Cubans thought the victims deserved it, like conservatives have responded to the report on the CIA’s use of torture. They did mention a bunch of Cuban political prisoners were released, breezed over like it was nothing. Hey Fox, that’s not nothing. Obama just got 50 political prisoners sprung from jail.

A thought that struck me as the president was speaking, once I gathered the gist and realized this was a big deal in policy terms, was that’s really good, but again, why couldn’t he have announced this BEFORE the election!?!?! Listening further, it seems likely nothing could be announced until the prisoner exchanges were worked out, and presumably Cuba didn’t care about getting it done in time to give Obama a win before the US election. In case someone is thinking the Democrats have just lost Florida for a long time to come, yes, Cuba policy has been controlled by Florida Cubans who are pretty one-issue about removing the Castro regime. However, as Kos points out, younger Cubans actually support normalization. So no matter how much calcified conservatives may howl, there is little political risk to Obama’s actions. Yes, congressional Republicans will scream, but how much were they going to seek common ground on anything anyway? Getting to watch them try to scare the public about communist missiles from 50 years ago will be a nice sidelight to bringing rationality to a piece of foreign policy.

Republicans will accuse the president and those supporting his actions of supporting dictators, and the first reply will be that we normalized relations with other dictatorships, including China and Vietnam. The issue however isn’t hypocrisy. Economic sanctions are a tool. Sometimes they work and sometimes they don’t. That expression about consistency is the hobgoblin of little minds certainly applies here. Applying sanctions sometimes works and sometimes doesn’t. Normalization might bring desired changes, or might not. Sanctions worked to change South Africa. Normalization worked with China and Vietnam. Sanctions didn’t work with Cuba. We’ve given them more than 50 years and the Castros are still there. Time to try something different. No, there’s no guarantee that Cuba will become less repressive other than as a temporary measure right now to comply with the agreement to normalize relations. So let’s give Obama credit for being willing to try something else, and that something else not involving an invasion.