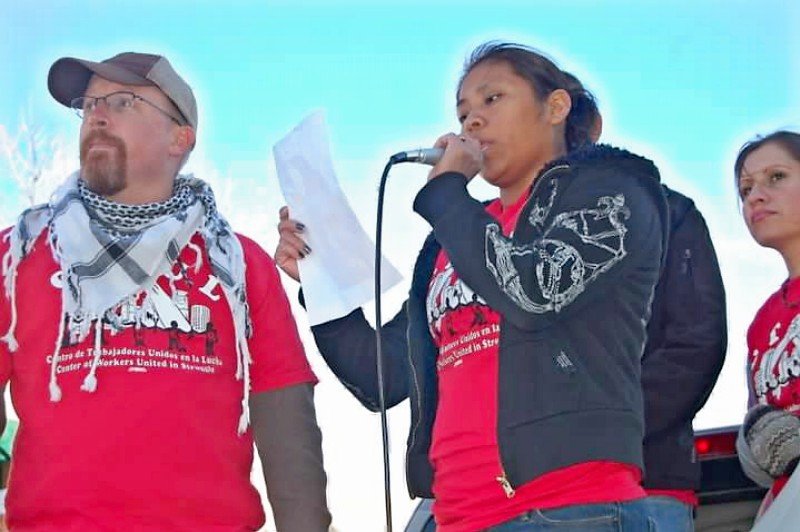 At 40 years old, Merle Payne is soft-spoken with a trim beard and unassuming nature. He is the co-director of Centro de Trabajodores Unidos en Lucha (CTUL), an organization “where workers build power to lead the struggle for fair wages, better working conditions, basic respect, and a voice in our workplaces.” CTUL made national headlines recently by winning a Responsible Contractor Policy with Target that will be implemented for new cleaning contracts at their stores in the metro area.

We interviewed Payne about his background as a social worker and community leader.

Can you tell us a little bit about your background?

I’ve lived here in the Twin Cities about 10 years. I grew up in a town in south Florida where there was a lot of poverty and also a lot of racism. There would often be race riots that broke out in the high schools and middle schools and tons of racial tension.

I went to college and graduate school and I sat around complaining about the world.  Then I ran into this organization while was in graduate school, the Coalition of Immokalee Workers. I participated in a march that they did across the state of Florida and I was blown away by the kind of work they were doing. It was this group of people who in theory shouldn’t be able to organize and shouldn’t be able to do anything –low-wage workers, immigrants, farmworkers, — they had everything against them, yet they were able to change the world around them. I had the most privilege in the world and I sat around complaining and wasn’t doing anything. It was a wake-up call.

I’ve been working on these issues now since 2000. I began working with the Student Farmworker Alliance and the Coalition of Immokalee Workers, organizing students all around the country to stand together with farmworkers. I moved here in 2004 because my older brother was living here and I was ready for a change; I came here for the summer and ended up staying. I now have a son who is two and my older brother has three kids and we spend a lot of time on the weekends together. I started working at the organization that became CTUL in 2007.

Recently CTUL negotiated a Responsible Contractor Policy with Target. What does that mean?

To understand the Responsible Contractor Policy with Target you need to take a step back and understand what’s happening in the retail cleaning industry.  We started organizing with retail janitors in 2010. 10 years earlier workers in the industry report that they were making $10.00 – $11.00 an hour.  Fast forward to 2010 they were making around minimum wage ($ 7.25) and there were less workers working per shift nearly doubling the workload. At the same time we found case after case where workers had wages stolen out of their checks. For example any time you damage merchandise – say a big buffing machine bumps up against a shelf and something falls off – one of the cleaning companies would take money out of the workers’ paycheck even though the company had insurance that pays for those damages. It looked like the supervisors were just pocketing that money.

At one company that cleans Target and other stores here in the Twin Cities, Diversified Maintenance Systems, workers filed a lawsuit alleging significant underpayment of wages. According to the workers, they had to work seven days a week; they were told to use a regular timecard six days a week and a “ghost employee” timecard for the seventh day; that means that the cleaning company was avoiding paying overtime. This turned into a class action lawsuit that the company settled for $675,000. That’s what we saw locally, but when we looked around nationally we saw case after case of multimillion dollar lawsuits against retail cleaning companies. In Texas, in California…We just kept finding case after case.

So this is what we saw happening in the retail janitorial industry. At the same time, most office buildings in downtown are cleaned by companies that are union, and workers are making $14.27 an hour with access to full benefits. This was won after significant struggle by the workers, and demonstrates that the industry can in fact change in a positive direction.

As retail janitors started organizing we approached Target and said we just want to make sure you’re aware of what’s happening with the cleaning of your stores, and we have some proposals and ways that things could change. At the same time workers led actions on the cleaning companies where they work. Some workers went on a hunger strike for 12 days. We marched three miles down Lake Street. Workers led three strikes last year. After all that we are able to gradually make some changes in the industry. When we started the campaign there were reports of wage theft at every single retail janitorial company; now we rarely find a case where companies are just outright stealing wages from the workers. Now the average wage is $8.50 to $9.00 an hour, up from around $7.25 to $7.50 an hour, and companies have taken steps for basic improvements on safety standards, making sure people get gloves, get proper training, etc.

The clincher is that Target will now be implementing a Responsible Contractor Policy. The new policy creates three new changes. First, and most important, any cleaning contractor that is cleaning Target stores in the metro area has to sit down with the workers, and within six months have to come to an agreement with the union and the workers. Second, there will be the creation of safety committees made up of at least half workers who are elected by their peers. Third, workers will no longer be forced to work seven days per week.

Through this Responsible Contractor Policy, Target is playing a leadership role in the industry. CTUL is now calling on other large retailers like Kohl’s, Sears and Michael’s, to follow Target’s leadership.

Do you define the work that you do as “organizing?”

At CTUL we focus on leadership development. We partner with workers so they can gain the tools to protect their workplace rights. I think the key thing is to recognize that workers have the tools and the knowledge to organize. The problem is that entire systems are set up to limit them from organizing and defending their rights. Some people come to the organization and feel that the problems they face in the workplace, from wage theft to poverty wages, are their fault, or they are too afraid to take action for fear of losing their jobs. At CTUL we take the time to analyze what’s happening, talk about our rights in the workplace and pull people together who have experienced the same exploitation. In doing so, workers are able to put into practice the tools and knowledge they have to become leaders in their own communities.

Can you talk a bit more about the emphasis on helping workers become community leaders?

Unions organize for contracts that can pull the standards up, and you can pass laws that will raise the minimum wage. All of that is important. But at the end of the day there are companies all over the place who are breaking the laws all the time and getting away with it. Laws and contracts are words on a piece of paper that can be won and taken away; but when people learn the tools to be leaders, that is something that can never be taken away. That is going to guarantee real long-term change. It’s something you don’t see the fruits of immediately but over the course of years you see a capacity growing and having an impact.

One of our members’ talks about the very first meeting he went to with Target and he felt terrified. “I’m going to go into this room to sit across the table from these very powerful people,” he thought. “But as soon as I got in the room I realized if they are sitting across the table with me, then I must be a really powerful person, too.” That changed how he thought of himself, viewing himself as a leader for change. Those moments are priceless.

What do you see on the current labor and income inequality landscape?

Generally looking at the work of CTUL and other worker centers around the country, people are coming to realize the ever increasing divide between the super wealthy and super poor. There is a deeper level of sophistication now in understanding the shifts in the economy and how people who hold power over the terms and conditions of labor have separated themselves from being accountable for those conditions. I think we are in a really exciting time, where workers who have been pushed to the margins of the economy and were considered unorganizeable are now fighting and clawing their way to be at the table to decide how the economy is working. It is both a crisis moment but it is also very exciting moment. Now is the time to stand up.