At what point does public debt become a problem? If you ask many Republicans when the debt hits 90% of GDP we’re in trouble. Given that the Federal Debt is above this level you can see why there is a push for budget control if not outright austerity. But where did that magic figure come from?

The answer is a work by two Harvard economists, Reinhart and Rogoff’s 2010 paper “Growth in a Time of Debt.” But now that this magic number has been debunked in spectacular style, will the call for austerity ease? Given how the sides have retrenched, no way. But it is true that a certain level of debt is indeed a problem – it just isn’t something you can pull from a formula and throw onto autopilot.

It all starts with the paper from 2010, released about the same time the Tea Party was gaining ground. Reinhart and Rogoff aren’t extremists but economists genuinely concerned about debt and how it affects the economy. Yet their reasoned concerns were little more than gasoline for a political fire and were soon burning brightly. The idea that public debt caused the slowdown became canon in many circles.

Earlier this year Thomas Herndon, a 28-year-old economics grad student at UMass Amherst, was writing his critique of the work. A simple request for more information to Prof. Carmen Reinhart nabbed him the original spreadsheet. It didn’t take long for Herndon to find the problem. “I clicked on cell L51, and saw that they had only averaged rows 30 through 44, instead of rows 30 through 49.” By leaving out Canada and Australia, nations with high public debt and high growth, the whole argument was skewed. The original paper fell apart.

The team of economists have been very prolific, and in 2011 published their book “This Time is Different” which included this paragraph:

If there is one common theme to the vast range of crises we consider in this book, it is that excessive debt accumulation, whether it be by the government, banks, corporations, or consumers, often poses greater systemic risks than it seems during a boom. Infusions of cash can make a government look like it is providing greater growth to its economy than it really is.

Not exactly Tea Party stuff – it doesn’t have that magical drop-dead figure of 90% that can drive policy. But a lot of debt, from any source, is a huge drag on the economy. File that under “duh” if you want to, but let’s look at how the public part of the debt, the part that we’re all uptight about, has fared since 1996, as a share of the economy: 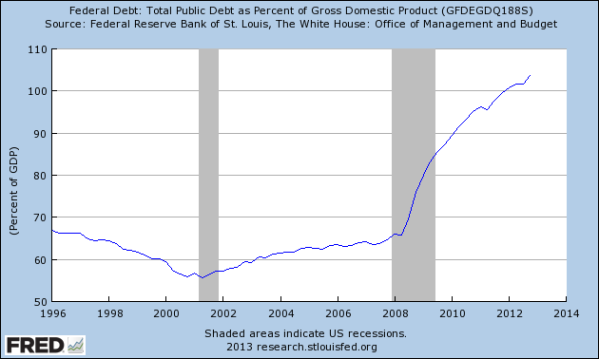 You can see three distinct trends here. By October 2000 the total debt had fallen to 56% of the economy – our first inflection point in this graph. From there, it grows through the early part of the Managed Depression to 66% of GDP, showing as we noted before that debt from deficit spending was growing faster than the economy as a whole. And from 2008 on we have TARP and collapse – the chart simply takes off.

The three phases of the chart show what a non-hysterical and reasonable discussion should be about our debt today, and the three lessons that are important:

That’s not what we generally hear, either from economists or politicians. But there is plenty of reason to believe that at some point the accumulated debt does slow down growth – and not just public debt. Are we there yet? Hard to say, but we do need to get this under some control. But should we pull back hard and enforce austerity? No, debt is best handled by growth, so a complete pullback would be counter-productive. But haven’t we been spending faster than the economy is growing for some time? Sure – so whatever we’ve been doing has been the wrong thing.

It goes without saying that some spending by the government is more “stimulating” than others. Unemployed people that might otherwise collect benefits can be put to work rebuilding infrastructure, for example. The economy is clearly restructuring as it finishes the transformations caused by disruptive technology changes – so what can we do to push these along? Keep in mind that even in the New Deal the deficit never exceeded 5% of GDP (versus 10% today).

The belief that a spreadsheet can give us a magic number to govern by is ridiculous. Apparently, the result many were working with was simply wrong, too. For all that, we’ve been running far more interesting experiments for the last two decades and seen far more interesting results.

If you really need a number, remember that in both economics and politics 90% of what you see is BS. At least.