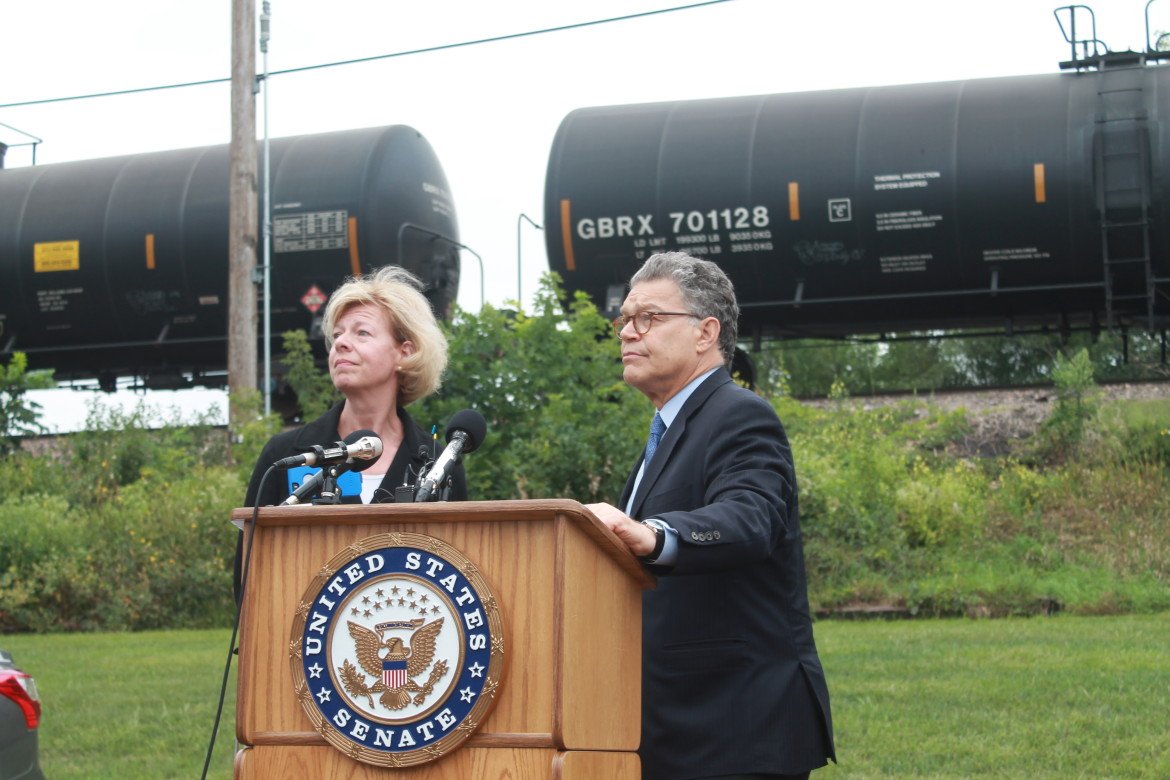 Six trains carrying crude oil have derailed and exploded in 2015. Based on the probability of a derailment, the Department of Transportation (DOT) predicts there will be at least four more this year.

Senator Al Franken (D-MN) and Senator Tammy Baldwin (D-WI) came together with state representatives, fire chiefs, mayors and citizen activists from Minnesota and Wisconsin to discuss the growing concern of trains carrying highly volatile crude oil through urban and suburban areas in the metro area in both states. Usually trains derail in rural areas, drawing little mainstream attention. But, in 2013, a derailment in Lac-Mégantic, Canada killed 47 people and demolished the entire town. Derailments are attributed to outdated rail cars not designed to carry such a volatile substance, and a lack of rail inspections. About ten trains carrying 30 million gallons of oil leave North Dakota’s Bakken Fields daily, bound for refineries in the Gulf and East Coast. Seven of these trains, over 100 cars long, pass directly through the Twin Cities. Railroads are not required to disclose when hazardous materials are transported so that first responders can be prepared in case of a disaster.

“It seems like a common sense measure, but that is not the case today,” said Senator Baldwin.

Real time notification and  transparency issues were covered in the round table discussion between political leaders and activists during Senators Franken and Baldwin joint press conference. In the 1980s, the railroad companies were exempted from the Emergency Planning and Community Right-To-Know Act (EPCRA) that requires governments and agencies to publish reports on hazardous and toxic chemicals.

Rail safety advocates want to know railroads’ emergency response plans — especially in a worst case scenario, the amount of liability insurance available and how routing decisions are made. This information has been kept secret despite requests from state and federal leaders. Citizens have asked for the rerouting trains around urban areas to decrease potential damage in a densely populated area like the Twin Cities.

“I’m not talking about pushing risks out of my community into someone else’s community,” said CARS Twin Cities Representative Cathy Velasquez Eberhart, whose house in St. Paul’s Como neighborhood sits in two “blast zones.” “Together, we need to find safer routes.”

A “blast zone” is the evacuation area within a one mile radius of tracks transporting crude oil. Over 300,000 Minnesotans live in a blast zone. The downtown areas of Minneapolis and Saint Paul are also in blast zones.

Last May, the federal government issued new standards for trains carrying flammable fuels including a lower speed limit in urban areas to decrease the risk of a derailment.

“On one hand you want to slow that train down. On the other hand, we do have the wait time at these intersections and sometimes those trains could be the difference between you and a hospital,” he said.

More dangerous chemicals in addition to crude oil are regularly transported by rail directly through urban areas. Ethanol, like crude oil, is considered a Class III flammable liquid by the U.S. Department of Transportation, but it is often overlooked and under-reported in the media said CARS Twin Cities Representative Claire Ruebeck.

Ruebeck lives near a school, church and community nursing home in two blast zones in Minneapolis.

“This is a serious matter,” Ruebeck said, “that keeps a lot of us awake at night.”