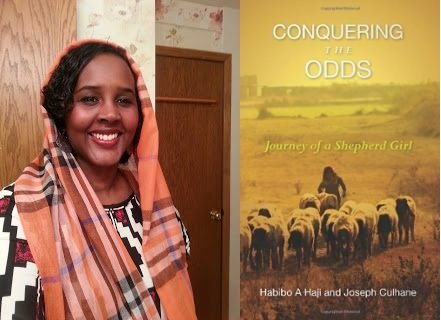 The Twin Cities is well known for its strong Somali community, but soon it may be known for their authors as well.

Somali-Minnesotan author Habibo Haji is showcasing her 2013 debut memoir Conquering the Odds: Journey of a Shepherd Girl at Subtext Books in St. Paul on Aug. 26. The book follows Haji as a young girl growing up in central Somalia during the peak of civil war, and as she flees to the United States with no education and speaking no English.

“This book is based on my life experience living in a primitive village in Balcad, Somalia with my grandmother where I worked as a shepherd and nomad from the age of four,” Haji said. “I survived crocodiles, jackals, malaria and civil war. I also survived the largest refugee camp in the world—Dadaab.”

Haji came to the United States when she was only 16 and in the book, she recounts some of the harder moments in her journey, like when she would tie her legs together at night while she watched over the cattle so she wouldn’t get raped in her sleep.

“There would be a lot of young men and boys around because they would be doing the same thing as I was doing,” she said. “So my fear of getting raped at night … I think that’s probably one of the hardest things. Especially at the age of 12 when you’re trying to find your identity anyway.”

But every hardship Haji faced throughout her journey was difficult for different reasons, she said, and coming to the United States was equally as terrifying for her.

“Coming here to the United States with no English, no education. That itself is pretty frightening,” she said. “I don’t know how I actually did it. Sometimes I look back and go, ‘Wow, that is crazy.’”

But Haji, now a registered nurse living in Rochester, said the book isn’t meant to simply document her hardships, but be an inspiration to those who are facing or have faced great adversity in their life.

“I would like to empower individuals. I would like to share my ups and downs and my pain and my success with them and say, ‘Look, you can overcome anything,’” she said. “It’s how you view what’s present and in front of you.”

You can meet Habibo Haji and watch her present her memoir at Subtext Books this Tuesday, Aug. 26, from 7 p.m. to 8 p.m. Free. This work was co-authored by Joseph Culhane.