From trash talk on Facebook to national news, talk about Cedar-Riverside leaves many believing that this Minneapolis neighborhood is among the most dangerous neighborhoods in the United States. The facts? Not even close. While it is true that the neighborhood has suffered several tragedies in the recent past, crime statistics tell a different story.

An FBI investigation into the disappearance of young Somali American men who were residents of Cedar Riverside, three highly publicized fatal shootings in 2008, and a grocery store robbery-triple homicide in the next-door Seward neighborhood in 2010 all have contributed to public perceptions of an unsafe neighborhood. As it turns out, these events became defining moments for the neighborhood as both the community and law enforcement took measures to curb crime.

The City of Minneapolis neighborhood crime reports show that crime in Cedar Riverside has drastically declined over the years. (See chart “Crime Stats Cedar-Riverside 2001-2009,” below.) These statistics are based on crimes reported to police officers, crimes observed on closed circuit televisions and by police officers on patrol. In 2001, 413 crimes were reported in the neighborhood, while last year only 280 crimes were reported. 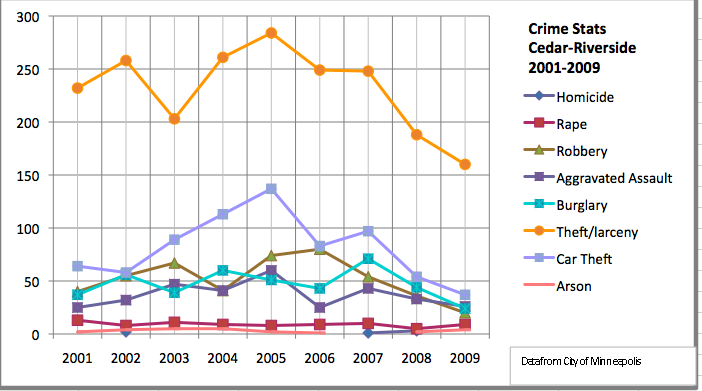 Specific crimes also show decreases. For instance, there were twice as many robberies (40) reported in 2001 as there were in 2009. Other crimes such as rape, which is universally underreported, and aggravated assault show smaller drops in reports made. In 2001, there were 13 rapes reported, compared to nine in 2009 and five rapes through September of this year. 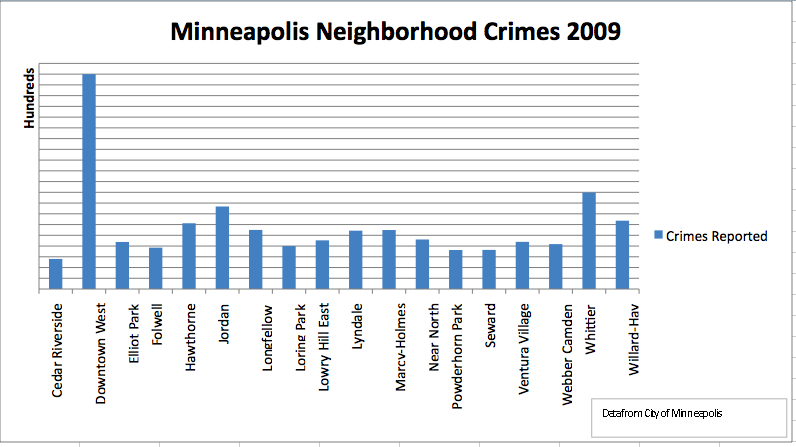 Officer Jeanine Brudenell, the police liaison with the Somali community, attributed the relatively low crime in the neighborhood to more than increased law enforcement. “The shootings that happened in 2008 were a changing moment for this community,” said Brudenell, who added that the community has really worked aggressively to make their neighborhood safe.

Regular safety walks and meetings have developed relationships among residents; and with law enforcement. Looking through minutes of the neighborhood’s safety meetings for the past year show that crime concerns were mostly car break-ins and thefts.

While the police department has made some gains in developing the trust of residents, the minutes from the safety meetings show that there are young men who feel harassed by police officers. Brudenell said that efforts to curb truancy and loitering could explain the misperception of the role and actions of police, and said that, “Trespassing, truancy and loitering are gateway crimes.”

A Youth Citizens’ Academy, which is scheduled to launch next year, will offer classes by the MPD aimed at improving police-youth relationships.

Salmah Hussein who works with youth at the Brian Coyle Center acknowledged the challenges of keeping youth away from petty crime. Lamenting few resources for young men, 18 to 25 year olds, Hussein said, “when young people stand idle they are likely to commit crime.”

The Confederation of the Somali Community in Minnesota (CSCM) has a juvenile diversion program, which includes basketball and soccer tournaments, has a limited capacity to meet this need.

With bars and a couple of universities in the area, the Cedar Riverside neighborhood is a thoroughfare of activities. As a result, Brudenell said, some of the crimes reported in the neighborhood are from these non-residents.

First precinct police inspector Kris Arneson, who has worked in different neighborhoods in Minneapolis, spoke to the larger crime trends in Cedar Riverside: “As time goes on, a sense of community develops as trust is built and the community becomes stronger as they gain confidence and ownership of neighborhood.”