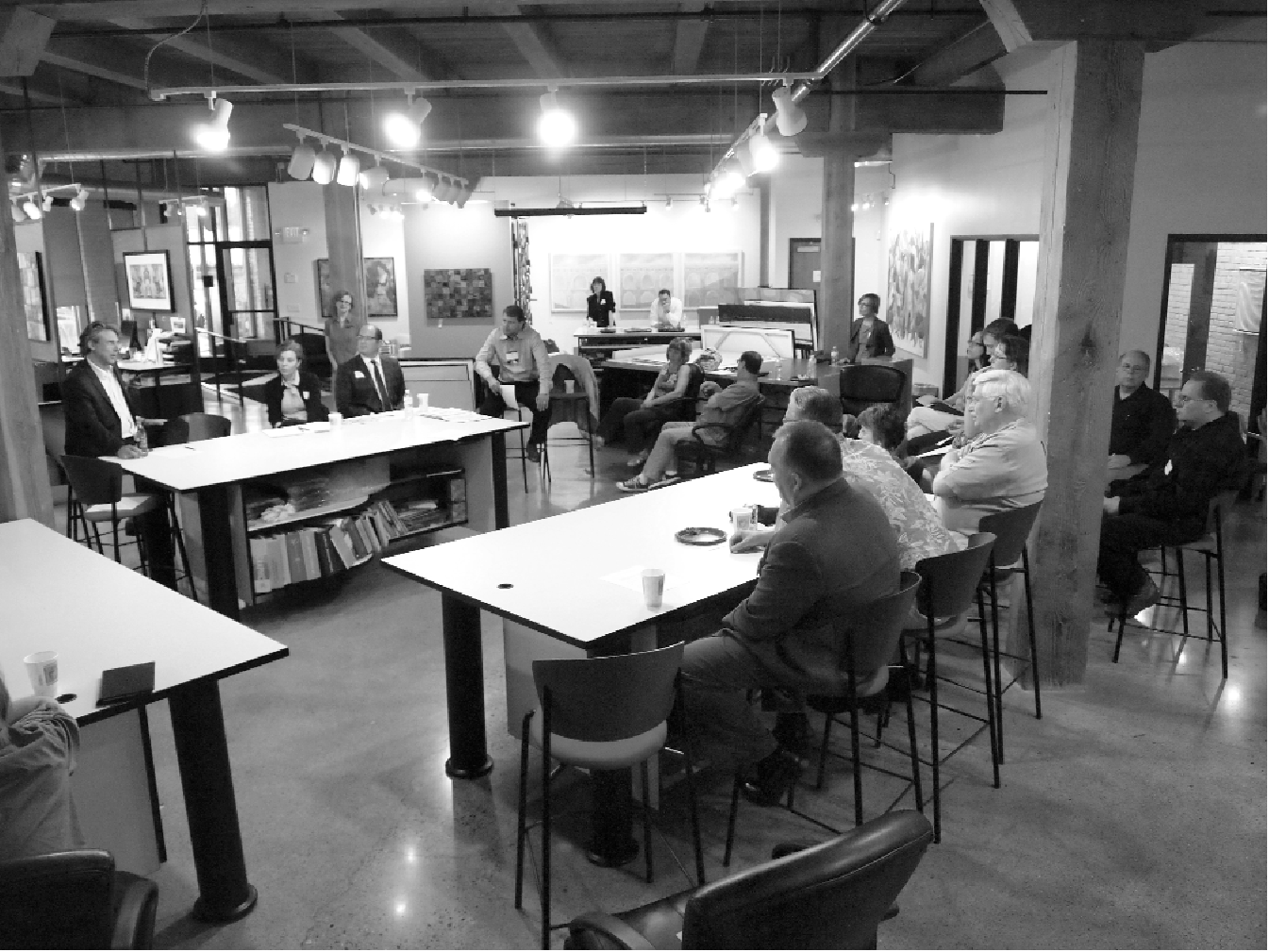 Maurice Blanks of Blu Dot, at left, and friends started their furniture business when they couldn’t afford what they liked, and didn’t like what they could afford.
(Photo by Margo Ashmore)

A May 3 discussion on “Arts, Education and the Creative Economy”—the second annual—brought local representatives of government, education, industry and the arts together at Corporate Art Force, 1400 Van Buren St. NE, mostly to discuss the challenges and opportunities of integrating the arts into everyday urban economic life.

City of Minneapolis Director of Arts, Culture & Creative Economy Gulgun Kayim explained that she works in the city coordinator’s office. “I have no staff and I have no budget, and I say that with pride,” she said.

She said she is called upon to help many city projects find ways to keep art as a vital part of the economic mix. It involves “lots of collaborations and work in the neighborhoods,” she said, and it often involves analyzing art’s economic value just as planners would analyze the value of other types of businesses, making sure the economic planners include “the widget that is art” in their calculations.

Edison High School Principal Carla Steinbach said that “art is really at the core” of much of the school’s work. “When I first came to Edison, the arts were diminished,” she said. Now, in her fifth year, as multiple artistic programs and community partnerships have flourished, she sees that “Edison can really, truly be the hub of the Northeast community.”

One of those partnerships involves Edison hosting the Morris Park Players community theatre group. Morris Park’s President Sue Fust said, “There is a whole lot of talented people in this community. They love to sing, they love to dance…we provide that opportunity for people.”

Resources are still an issue, though. “We’re all volunteers,” she said. “It’s a stretch for us.”

Max Athorn, Edison’s theatre teacher, said that when he came to Edison last year, “the building was re-engaging in theatre…there was a huge amount of support from the administration.”

The partnership with Morris Park, he said, “put us five years ahead” as the theatre group shared costumes and equipment while the school shared auditorium space.

And, he said, the auditorium at Edison is scheduled to receive a $1.5 million renovation.

John Sweeney, owner of Brave New Workshop, told his own story of growing up on a farm, selling food at roadside stands to earn money to go to private schools and joining the high-powered corporate real estate world; only to fall in love with improvisational theatre, which led him to a $200 per week job working for Dudley Riggs at the Brave New Workshop.

He told Riggs’ story of opening a small espresso cafe 53 years ago this month, which supported a small improvisational theatre company. “We haven’t missed a weekend since 1958,” he said, though the business has faced challenges, many of them having involving finding an income stream to support an art form that has a loyal but limited following.

Now, he said, the company makes most of its income by providing improvisational theatre services to corporate clients.

Sweeney said he is accustomed to being perceived as edgy, as the workshop has always made fun of “the establishment.” He said he realized his remarks might offend some in the room, but that the idea of government providing direct support to artists is foreign to him.

“I’m not necessarily saying I’m opposed to it,” he said. “I’m saying I can’t imagine it.”

His farm background, he said, taught him that when ends don’t meet, “you get up earlier and work harder.”

Maurice Blanks of the Northeast-based furniture company Blu Dot, said the company came together when he and two college friends lamented that when furnishing their first homes, “we couldn’t afford what we liked and we didn’t like what we could afford.”

They went to work designing and manufacturing furniture they considered attractive and affordable, and the idea caught on.

Staying in Northeast was important enough that they split up their office and warehouse with their latest move. They couldn’t find facilities in the city that would allow them to keep everything under one roof, but they weren’t willing to leave in order to accomplish that.

“The creative environment of the city, and really of Northeast, was too important to us,” he said.

Bill Kieger, president of Corporate Art Force, said his company gets down to the basics of art and economics. “Art work has to be looked at as an asset,” he said, and the company has helped other firms keep an accurate inventory of their art works and find residual value in art works they don’t need anymore.

They help companies find the art that they want, and manage their collections, all with the idea of making and documenting the positive economic force that the art generates.

Now, he said, the company is selling its art management service to other companies for a monthly fee, and employees “work the phones” pitching potential clients. “This is a laboratory where we’re trying to perfect this model,” he said.