We were told to expect the AYPV boys at our office lodgings at 4:30 AM because the Global Day of Listening was scheduled to begin by 5:30. They arrived a little late because they had been on the phone to others around the world since 10 PM last night. The plan for today was to continue the conversations over Skype connections on the internet. We rented a local internet café for the day but it wasn’t schedued to open until 8 AM so the conversation across the ocean(s) began with just telephone conversations.

Scott Shaeffer-Duffy from a Catholic Worker Community in Massachusetts helped begin the dialog as his wife, son, and daughter all joined in to talk with Hakim and the youth seated around our table in our office /”hotel”. We had a few technical glitches but everyone was engaged despite the long night and the early morning. Different members of the International Peace Delegation were asked to send greetings to their friends at home as part of the listening project. I signed up for 7 AM and actually joined the conversation at 7:30, sending greetings to the peace community in the Twin Cities where it was 10 PM on the day before. The young people asked me to tell them about groups I was part of in Minnesota so I described our weekly Wednesday vigil at Alliant Techsystems (ATK).

The connection is relevant for our friends in Afghanistan since this Minnesota-based war profiteer has made landmines and cluster munitions, two of the scourges of war which continue to plague civilians long after the conflict ended in certain regions of the country. I also mentioned the new weapon used by the US Army in Afghanistan, a combat gun that “shoots around corners”. Hakim asked if this was the XM-25 and I said that was – its new name and it’s “roll-out” was happening now in Afghanistan.

Abdulai asked me about whether I was hopeful about change coming after vigiling for so many years at ATK. 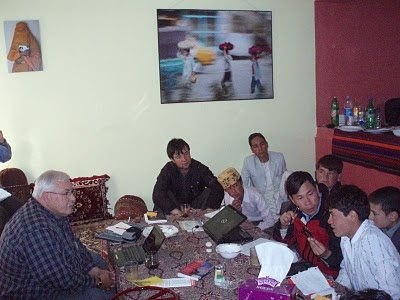 This 15 year old boy is wise beyond his years. He had previously said that he feels tired of trying but said we need patience – and, if it doesn’t happen in his lifetime, the struggle is still worth it. I told him I shared his sentiment: if ATK doesn’t end it’s production and sale of indiscriminate weapons, it is still important for my own integrity to continue our protest at the corporate entrance because I have to act on my values. Even if change doesn’t come to ATK, change does come in my life and my heart.

They talked with Sami Rasouli in Iraq (about his and other Iraqis experience with the US war machine) and Media Benjamin and Ann Wright in Washington, DC before both of them left for a trip to Quantico to protest the inhumane treatment of whistle-blower Bradley Manning. They talked with people in Australia, a guy in Laos (who told the boys of the legacy of unexploded bombs from the Indochina War), someone in Poland, and many other groups from the US. 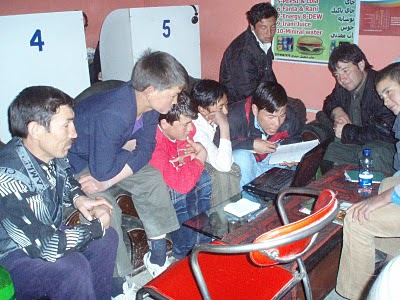 I listened to their conversations but also used the time to send a few emails to my friends and family to reassure them I was safe while engaged in this important work of peacemaking.

Patrick suggested we use part of the afternoon to go shopping with our new friends Zahra and Asif (to help translate/negotiate and to show us where to go). As if to show that even shopping in Afghanistan can be an adventure, our van driver was stopped by the police for driving the wrong way on a certain street since the other street was closed. (There were no signs indicating it was one way.) Patrick and I sat quietly in the van as both Zahra and Asif got out to engage the police as more and more surrounded our vehicle. While the other two negotiated, our driver was instructed to turn around in an impossibly small space. Driving conditions are a complete nightmare without the police stopping you.

After about 15-20 minutes, our two defenders came back to the van and said, “We’ll walk from here.” As we got to the sidewalk, Zahra assured us the driver wasn’t in serious trouble. She told me later that the policeman wanted a cash bribe. She told him she was a journalist and if he demanded money, she would print his name to expose his corruption in her newspaper. He withdrew his request. For a country where women have been marginalized, it is so refreshing to see a determined feminist here. She was no slouch in negotiating a fair price for the rug Patrick bought but she hesitated and was puzzled when I told her I wanted to buy a scarf for my wife. Here is a woman who is determined to be “unveiled” whenever possible, why would her new friend want his wife to cover her head? I laughed and told her Christine would only be wearing it around her neck! Besides, she’s the breadwinner in our family – while I’m out trapesing around the world in search of peace and justice.

After we returned, she shared her concerns with a couple of us about our safety here in Afghanistan. (I hadn’t known she had just received threats a week ago and I’m sure that added to her caution for us. She was concerned about the security of the area where the hotel some of the other delegates were staying at – noting that the main entrance was neither guarded nor locked. Anyone could walk into the building. She also expressed concern about a group of us traveling to Panjshir, a province north of Kabul, past Baghram Air Base and site of the notorious prison where the US had detained so many earlier in the war. Apparently they’ve just built a new detention center a few hundred yards away so they can claim not to being holding people in that shameful place.

After returning to re-join the young peace volunteer and their indefatigable mentor, Hakim, for several more hours, most of we westerners left to go to bed at 10 PM, leaving Kathy Kelly and a few others to finish the international dialog at midnight – 26 hours after they started! As is the custom this week, we walk back to our home-base in small groups, always accompanied by one of the Afghan youth. And here I thought that some of my work was to accompany them! They are such a blessing and inspiration to us.