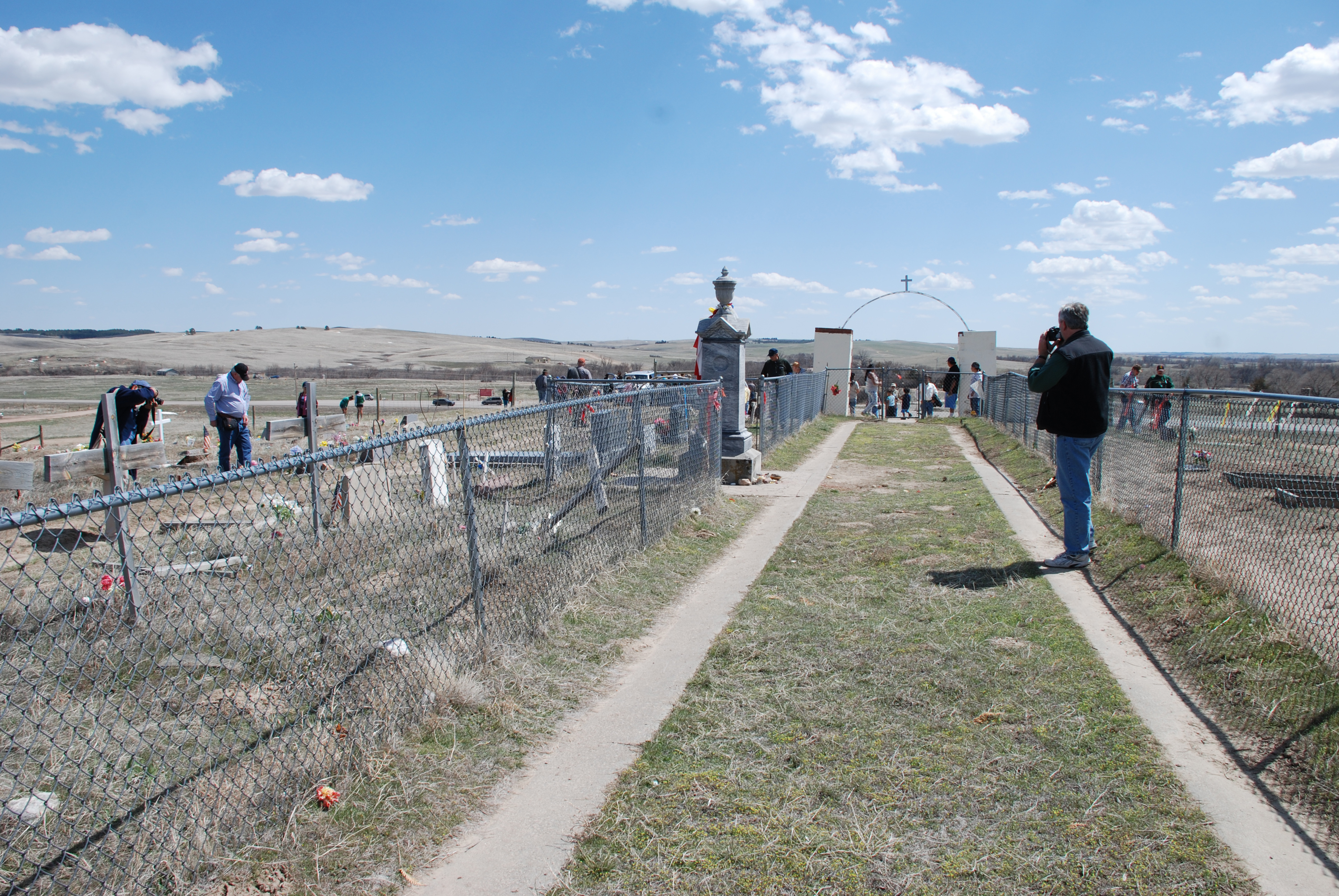 FORT ROBINSON, NEBRASKA—Standing in front of the reconstructed guardhouse where Lakota Chief Crazy Horse was murdered in 1877, author Thomas Powers reviewed the last 15 minutes in the life of the man who led several defeats of U.S. troops, including Custer’s 7th Cavalry at the Little Big Horn in 1876.

Powers spoke in April 2013 at the conclusion of the ninth, and probably the last, Fort Robinson History Conference for scholars of the Indian wars at Fort Robinson, Nebraska, where Crazy Horse was killed on Sept. 5, 1877.

“He was killed unnecessarily for political reasons,” Powers said, “but no one wanted him killed at that time.”

Powers, who has written eight books including The Killing of Crazy Horse, drew a parallel between the intrigue among Indian factions and the conflicts among Cold War military intelligence services—subjects of his earlier books. Powers continued his narrative at the dinner concluding the thee-day conference on April 27.

Military leaders in the 1870s, he said, lacked “an information loop” allowing them to determine whether they were “being played” by their intelligence sources.

Lt. William Philo Clark, an officer working for Gen. George Crook, had created a network of informers that he used to get information and control over the various Lakota bands, especially those under the leadership of Red Cloud and Spotted Tail at nearby Indian agencies.

Crazy Horse had gained notoriety as the military leader of Custer’s defeat, and politicians and military leaders didn’t know what to do when he offered to surrender. Lakota spiritual leader Sitting Bull had escaped with his followers to Canada.

Gen. Crook was “at the heart” of these events, and he worked to divide and conquer, exploiting the jealousies among the chiefs, Powers said.

“In the beginning of the summer of 1877 when Crazy Horse surrendered, Crook thought of him as a solution to a problem,” Powers said. “Crook was jealous of Red Cloud and intended to reduce his influence by raising Crazy Horse up a rung or two.”

“By the end of the summer, though, he began to think Crazy Horse was a problem—someone something had to be done about,” Powers said.

Working for Crook since late 1876, “Clark was smart and thought he could do anything. He was attractive; he made friends quickly and took an immediate interest in Indians. He learned the Indian sign language,” Powers said. “Clark was his man to deal with the Oglala Sioux.”

“Clark did the job with great confidence; he talked to everybody,” Powers said.

Clark maintained “a degree of political control” and befriended He Dog and Little Big Man, undermining their friendships with Crazy Horse.

These relationships helped Clark create informer networks to gather information, Powers said. “People in different camps collected information about what people wanted and what they were angry about.”

“Clark felt there was nothing he did not know in the summer of 1877. Everything spoken in council lodge was passed on to Clark and Crook.”

On the other side, rumors abounded that Crook wanted to make Crazy Horse head of all the Lakota, displacing Red Cloud and Spotted Tail, Powers said.

Little Wolf, a nephew of Red Cloud, had decided that Crazy Horse should be killed and Clark may not have known about the family ties, Powers said.

None of these reports was true.

Crazy Horse, on the other hand, thought he was to be given an agency on a site he would select and a trip to Washington to meet with the president to negotiate his future and work out his differences with the other chiefs, Powers said. Military leaders, however, had decided to ship Crazy Horse to prison in Florida.

Lt. Jesse Lee, the relatively young Indian agent at the Spotted Tail Agency, was among the leaders sent to escort Crazy Horse to Fort Robinson, where he was to negotiate his future.

Lee, who prided himself on his honesty in dealing with Indians, repeatedly assured Crazy Horse that he would be conducted safely to the fort, Powers said.

When they arrived, however, he was told to escort the chief to the officer at the guardhouse. Lee courageously but unsuccessfully argued with his superior officer, saying he promised Crazy Horse safe conduct, Powers said.

By the time he was escorted across the parade grounds toward the adjutant’s office and the nearby guardhouse, mobs of armed Indians representing factions for and against Crazy Horse had gathered and were posed on opposite sides of the entourage.

Soldiers told to keep order included many still bitter about Crazy Horse’s defeat of Custer and the 7th Cavalry the previous year. It was a potentially explosive situation, Powers said.

When Crazy Horse took two steps inside the building, he saw the jail door inside and realized he was arrested. Some prisoners inside rattled their chains to signal that this was a jail. He yelled that he had been betrayed.

“Then without any hope of success, he rebelled. He bolted to his feet, used the brave word—a sound like a growling bear—and thrust himself” away from the building, Powers said. He pulled a knife and stabbed Little Big Man on the wrist, and during a struggle, Crazy was stabbed.

He was carried to the nearby adjutant’s office where he spent five hours dying with a doctor and a few friends attending to him.

“Crazy Horse asked for Lee to whom he whispered something,” Powers said. “Lee always claimed that he said he forgave him, but Lee never forgave himself. No one else knows what he said.”

“Crazy Horse’s father and mother claimed the body. It was taken on a travois to the Spotted Tail Agency and then to an unknown location,” Powers said.

Even though Crook mistrusted the assassination rumor from a man named Woman Dress, he chose not to meet with Crazy Horse.

“If Crook had talked with Crazy Horse, they could have had a serious conversation and things could have gone another way,” Powers said.

Woman Dress later said he knew that Crook was gun shy after an assassination attempt against him in the Apache wars and this rumor may have deliberately prevented talks, Powers said.

Powers said he was struck with how powerfully Crazy Horse’s death affected people immediately, yet is seldom more than a footnote in the history books.

“This afternoon we talked about the actual killing of Crazy Horse and that was basically a tale of sorrow with difficult moments that are hard to contemplate,” he said.

Powers praised the Western historians for their creation of the “basic factual record of the winning of the West in the Great Sioux War.”

He said he explored further into the manner of Crazy Horse’s death, the drama of it, and the injustice of it.

“Crazy Horse was talked about from his early teens—he was someone who was paid attention to. He was never overlooked,” Powers said.

Crazy Horse spoke little, Powers said. He lived by his example and his bravery, not his words, Powers said. He never allowed his photograph to be taken. By contrast, the writings of Sitting Bull would fill volumes and he traveled with Buffalo Bill’s Wild West.

At the conference, two other historians led tours of sites they’ve studied.

Jerome A. Greene, who has written several books on the Great Sioux War, led a tour of the Wounded Knee site in South Dakota, which he characterized as the most degraded historic site he’s ever seen. Two highways intersect the site where soldiers shot down hundreds of unarmed Minneconjou, who had surrendered in December 1890. A private owner is asking a premium price for 40 acres of land that encompasses part of the site, inspiring cries to preserve the site from development.

Minnesota native Paul L. Hedren led a tour of Warbonnet Creek in Nebraska, site of a skirmish on July 17, 1876, where Buffalo Bill Cody took “the first scalp for Custer” to avenge the Little Big Horn the previous month. Two markers note the hilltop and Cody’s confrontation. Hedren said Cody only briefly celebrated the “first scalp” story, ending it as he befriended and relied on more Native peoples in his programs.

A closing panel discussion lamented the ages of conference participants. The New Western Historians celebrated in the 1980s have become the Old Western Historians, noted John D. McDermott, who has written the two-volume Red Cloud’s War and several other books on the Indian wars.

“The Indian war historians and Indian war buffs are in trouble,” he said. “We need new blood. Over time certain aspects of history are looked at fresh because new people provide new interpretations.”

Panelists agreed that much remains to be done in American Indian history: chronicling the daily lives of soldiers, the contributions of African-Americans, and contemporary newspaper coverage—as well as exploring new sources.

Greene, like Hedren, is a retired historian from the National Park Service.

“The Park Service looked at events from the Indian perspective,” Greene said, adding that he met people who shared many perspectives on history.

“Who’s going to follow us?” he asked. “I don’t see young kids, like we were, who were interested in television westerns” and children who search campsites for pottery and arrowheads.

Greene suggested that rich research topics could include the Leech Lake conflict of 1898 and other more recent Indian-white conflicts.

Hedron said his next book will cover the life of ordinary soldiers and the process or organizing a campaign.

Charles E. Rankin, editor-in-chief at the University of Oklahoma Press, said the basis of military history has been laid by this generation of scholars since the 1960s.

Tribal cultures that have nothing to with military history will also be a growing subject, he said.

“There’s an incredible transformation in electronic publishing and print-on-demand challenging the supposed death of the book,” Rankin said. “There remains an interest in academic publishing. I keep getting manuscripts from people who are not represented here.”