A friend of mine recently had a bike-riding experience worthy of story-telling, and agreed to share it here. Della Kurzer-Zlotnick, the author, will be moving to Oberlin for college this fall. -Janne Flisrand

I’ve just gotten into biking as a primary form of transportation in the last year or two. As a car-free, environmentally conscious recent high school graduate, biking is the most appealing option. A week ago, I spent my day biking around the metro area to various appointments and meetings. The day was mostly pleasant, aside from a few yards of flooded bike path along Minnehaha creek.

My last ride of the day was from Take Action MN, slightly north of the Union Park neighborhood in St. Paul, to my house in MacGroveland. I left around 9pm as it was starting to get dark. I biked down Pelham Blvd (a designated bike route), and crossed I-94 onto a stretch of downhill. As I was coasting down, I noticed something on the street directly ahead of me. 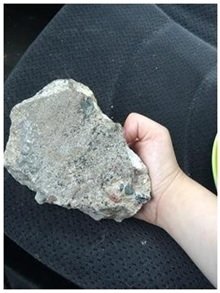 I remember thinking to myself, “That’s not a rock,” and then, a few seconds later, “Nope, that’s definitely a rock, but I can go through it.” I’m not sure why exactly I thought my bike could go through the rock, but I’m guessing it was because I knew I was going too fast to stop and was too close to safely swerve, so going through the rock was my only option. As I hit the rock with my front wheel, I was thrown from my bike. I landed on my right knee and left hand, and scraped my left arm and shoulder as I rolled down the hill.

Luckily, I made a pretty loud noise when I crashed and a woman whose house I was in front of came out to help. She brought me inside and told me that Pelham is notorious for bike crashes because the road is in such poor condition, and that as soon as she heard me fall, she knew it was a cyclist. 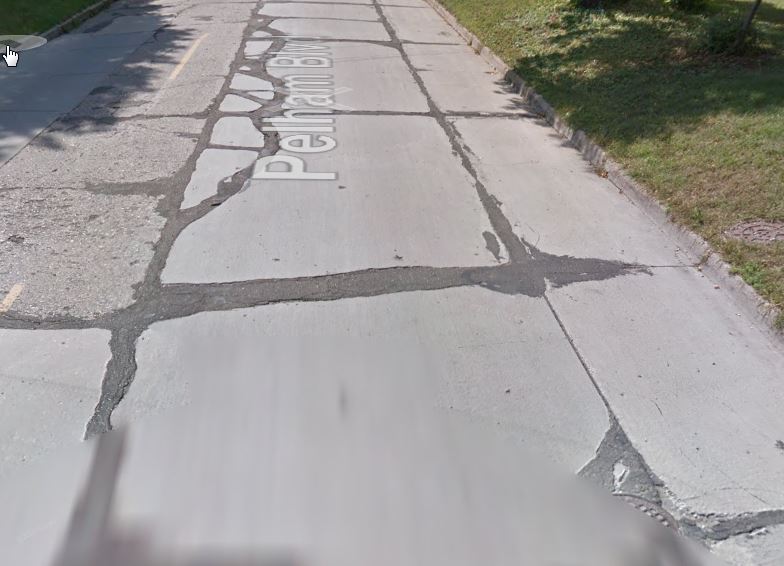 The Source of “The Rock”

I drove to the ER, where I spent three hours. The result was a sprained wrist, a few bad scrapes, and a lot of stiffness. 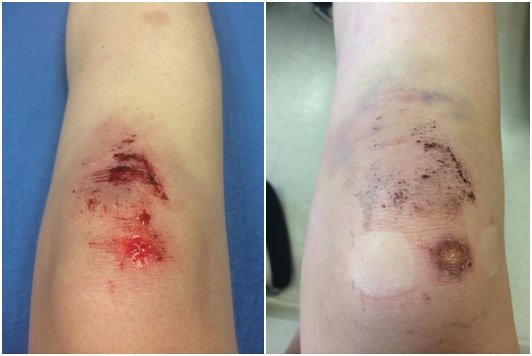 What Pehlam Does to Knees

The reactions from friends and family who have seen me since the crash have given me insight into local perception of biking. I look a lot more injured than I actually am — my wrist and forearm are in a heavy-duty splint and I have large bandages on my shoulder, knee, and hand — so people have been alarmed. When I’ve told people what happened and mentioned that I was biking at night, most have gotten a look on their face of understanding, as if to say, “Of course she crashed, she was biking at night.” I’ve been asked nearly every time and almost immediately if I had a light, whether I was wearing my contacts, or if I had ever biked at night before.*

I’ve tried to put this in the context of driving, which more people in my life seem to understand and identify with. If I had been driving down a highway at night and there were a branch in the middle of the road, I might have hit it and crashed. I can’t imagine people asking me immediately if my lights were on or if I had experience driving at night, because it is an expectation that highways are maintained so vehicles can drive safely. The blame likely would have been on the branch, not the driver (or the car).

The issue wasn’t that it was dark or that I couldn’t see the rock (which turned out to be a broken chunk of the road). The issue was that the rock was there in the first place. Very few people have wondered why there was a huge piece of concrete in the middle of what is supposed to be a designated bike route, or why residents of Pelham routinely witness bike crashes.

I plan on getting back on my bike by the end of this week. The crash has certainly made me more cautious, but it hasn’t deterred me from biking in the least. However, I worry that crash like this are discouraging a large group of people from using biking as a form of transportation. If roads and highways are maintained much better than designated bike routes, it’s not surprising that most people choose to drive. Maintaining streets for bicyclists as well as we maintain roads for motor vehicles is a critical part of encouraging more people to bike. 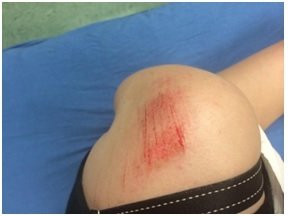 Pelham Does Damage to a Shoulder

*For the record, the answer is “yes” to all three.