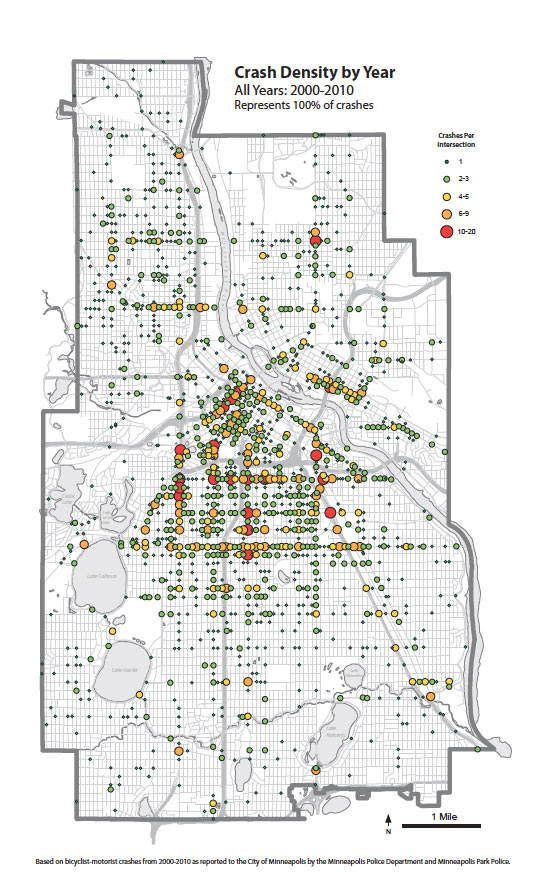 The intersection of East Franklin Avenue and Cedar Avenue has the highest number of bicycle-car crashes in the city, with Hiawatha Avenue and 26th Street East following closely behind in fourth place according to a new study out by the Bicycle and Pedestrian Section of the Public Works Department.

The study is the first of its kind, and answers questions such as, “Who causes more accidents – motorists or cyclists?” (As it turns out, it’s split pretty evenly), and “Do more or less bikes on the road make it safer to bike in the city?” (The numbers show that the more bike traffic a street has, the less crashes there are.)

The department analyzed ten years of data, pulled from accident reports between 2000 and 2010, and came to three overarching conclusions that will help guide its efforts to increase bicyclist safety in the future. First, they found that intersections were the most likely place for a crash to occur, with 41% of crashes happening in an intersection. Second, they found that drivers were not aware of cyclists or were not giving them the right of way – this was a factor in more than 40% of vehicle-caused crashes. Third, cyclists weren’t biking predictably – they were not yielding to cars, ignoring traffic signs, and riding against traffic – a factor in more than 30% of bicycle-caused crashes.

What does this mean for the two intersections in Seward? On a post by Councilperson Cam Gorden, he suggests that a bike lane would ease crashes on Franklin and Cedar. For the Hiawatha and 26th St E intersection, he notes that the expanded island in the middle of 26th has helped make crossing the busy street easier, however he suggests the area needs further work.

Public Works has several tools at its disposal to reduce crashes, including targeting safety campaigns to both motorists and bicyclists, guiding bicyclists through intersections by providing protected turns, increasing the number of bike lanes, working with the police department to ensure that traffic laws are being enforced for both bicyclists and motorists, holding bike rides and classes, and publishing regular safety reports.

The report is the first step toward increasing biker safety in Minneapolis. Plans for implementing changes have not been released. Gorden commented, “This report is just the beginning on more focused work by the City to reduce motorist and bicyclist crashes….”