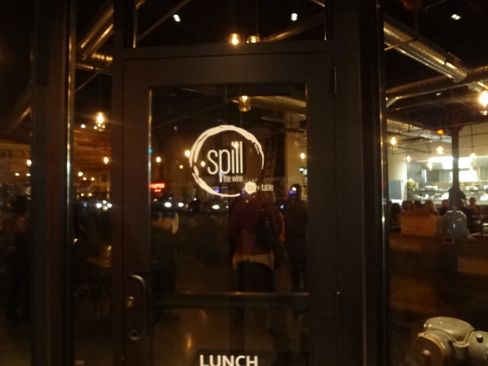 Am I just turning into a cranky geezer, or are restaurants getting louder? And if so, why?

I have been to three new restaurants lately—Red Cow, Spill the Wine, and Morrissey’s Irish Pub—where the decibel levels were so high that they really defined the dining experience.

I did have a fleeting paranoid thought that maybe the decibel levels were not accidental, but rather, designed to chase away the over-40 crowd. I remembered reading about a shopping mall in Ohio that solved the problem of loitering packs of teenagers by playing the mellow tones of Perry Como through the sound system. Maybe the rock concert noise levels were designed to have the opposite effect. This suspicion was further fueled by the menu at Spill the Wine, which is printed in black on brown paper, some of it in a small skinny font that was a challenge to read even with reading glasses and a flashlight.

Or maybe I’m not paranoid. As an article in the New York Times on restaurant noise notes, “Some customers like the loudness. Younger people can withstand loud music longer, while older ones may run from it, helping proprietors maintain a youthful clientele and a fresh image.” 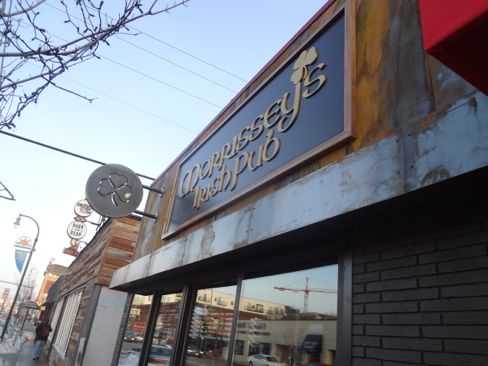 Not all noise is created equal, and the noise levels varied from place to place. Loudest was Morrissey’s Irish Pub, 913 W. Lake St., Minneapolis, where the solo guitar player was very good and very loud, but he was louder than he was good. The problem here seemed to be that the musician was amping up to be heard above the roar of conversation, and the talkers at the tables were raising their voices to be heard above the music. Like an acoustic arms race.

Which kind of defeats the whole point of an Irish pub. The Irish are a nation of storytellers, and the real charm of an Irish pub is the conviviality: people sitting around swapping stories and quaffing pints. At Morrissey’s, which has four flat-screen televisions mounted on the walls, the vibe is really really more sports bar than Irish pub. You could tell a story if you wanted to, but unless you shout, nobody will hear you—at least in the evenings, when the place is packed to capacity and there’s often a bouncer on hand.

As for the food and drink, they offer the usual selection of Irish beers and liquor, and the obligatory bangers and mash and corned beef and cabbage and fish and chips (which were actually pretty good), but otherwise it’s pretty much sports bar fare: burgers and sandwiches and chicken wings. 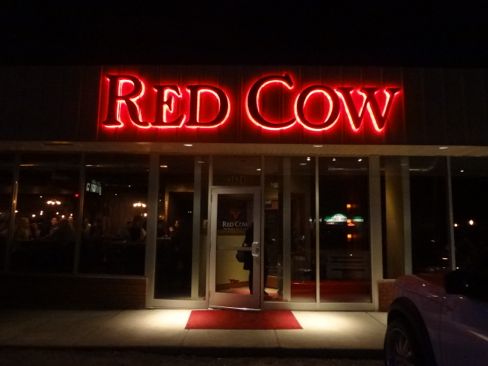 The sound level was nearly as high at Red Cow, the new burger and beer emporium at 3624 W. 50th St. (between Drew and Chowen), but it was at least as intrusive. At peak levels, it reminded me of the late, lamented Pane Vino Dolce, where dining sometimes felt like being trapped inside a giant tin can, with somebody banging on the outside. Sound reverberating off of bare walls and ceiling, with nothing to absorb it.

Update 4/10: I just received this note from Luke Shimp, owner of the Red Cow: “I just read your ‘Cranky Geezer’ piece. I too feel Red Cow’s acoustics were too ‘live.’ I hired an acoustical engineer last week, they installed a number of sound absorbing solutions this past Friday. Unsure when you were in, but it is 80% better than prior to Friday, the other 20% solution has been ordered (different acoustic material) to infill throughout the space. Hoping to have those up by the weekend.” 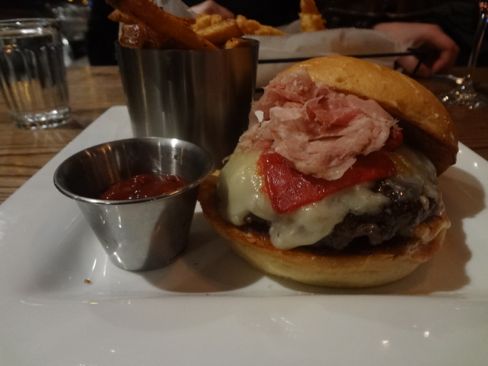 The heart of the menu is the burgers ($10-$12), which come in lots of different species, including bison, elk, lamb, chicken, turkey, salmon, duck, and curried chickpea. I opted for the Barcelona, a big patty of Angus beef topped with Manchego, prosciutto, piquillo pepper, and a smoked aioli ($11.50 with fries), while Carol ordered the fish and chips, a typical but tasty rendition, robed in a puffy beer batter. We also tried the ahi crisps ($11), slices of seared tuna whose delicate flavor was buried under toppings of avocado, salty ponzu, and pepper aioli. There are some other intriguing offerings on the menu, including mussels in a Fulton Sweet Child of Vine-blue cheese broth ($12), a pork belly banh mi ($11), and poutines with your choice of braised beef and Summit beer cheese; duck confit with balsamic onions and goat cheese, or apples, bacon and bleu cheese.

The sound level at Spill the Wine, a few doors down from Morrissey’s at 901 W. Lake St., wasn’t quite as high, but it had a distinctive higher pitch: for some mysterious reason, the female-to-male ratio when we visited was about 50 to 10, and women’s higher voices carry further than men’s. Spill the Wine had the most interesting menu, with a selection of small plates that ranged from octopus a la parilla ($9) and lap cheong fried rice, poached egg and shoyu ($8) to skillet bread, kentucky ham, arugula, taleggio, and honey ($7).

But nearly everything we tried—except for the delicious cast iron scallops with grilled frisee ($14) was rather oily, from the browned cauliflower, cracked olives, salsa verde ($7) to the gnocchi with king crab, brown butter, oregano and pecorino ($11) and the cheddar polenta with spicy lamb sausage, onions, and peppers ($9). 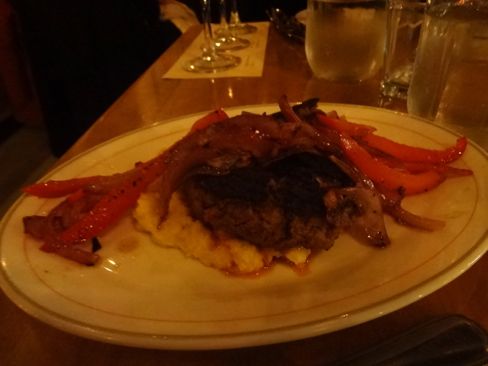 Of course, all this whining aside, there’s an easy way to avoid the high decibels at any of these places: go for lunch or happy hour. I haven’t checked the lunch crowd at Red Cow, but I stopped in recently at both Morrissey’s and Spill the Wine at around 12:30 p.m., and they were both virtually empty—and a lot quieter. Morrissey’s has happy hour drink specials from 4 to 7 daily, while Red Cow offers discounted drinks and food specials from 3-6, and 9 to close daily. At Spill the Wine the happy hour drink specials and small plates are offered Monday to Friday from 3 to 6.