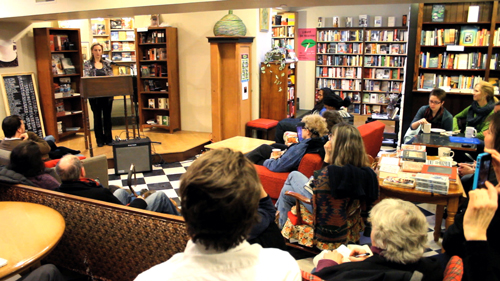 Since March 18, Cracked Walnut has been presenting 20 literary readings across the metro area, and one reading in Duluth. These readings feature a mixture of over 50 poets and prose artists. The series will conclude on April 12 at Cafe Bene in St. Paul.

Cracked Walnut founder Satish Jayaraj started the program as a means of bringing literary readings into unusual locations within different communities. In the past, they’ve presented readings in a funeral parlor, a grocery store, and a public park. The goal of these readings is to “to procure a love for spoken literature, community and creativity.”

In September of last year, Jayaraj considered the possibility of expanding the singular readings into a month-long festival which would engage as many communities as possible across the Twin Cities and beyond. Through his contacts in the literary world, he assembled a list of venues whose patrons would value a reading hosted in their space. In addition, he reached out to his colleagues in the Hamline University Creative Writing Programs as well as poets, authors, and performers from throughout the area. Most of the readers have had work published in journals, books, and literary magazines.

Jayaraj coined the moniker Cracked Walnut for several reasons. On one level the walnut is a very old nut and is emblematic of the long tradition of storytelling in human communities. On another level, he feels that one of the goals of the all Cracked Walnut programs is to foster experimentation and development, so much of the work may not be quite perfect or “cracked.”

The reading series is sponsored by Hamline University Creative Writing Programs and the League of Minnesota Poets. Below, hear Cracked Walnut readings by (from top to bottom) Donna Isaac, Andre Blissenbach, and IBé.