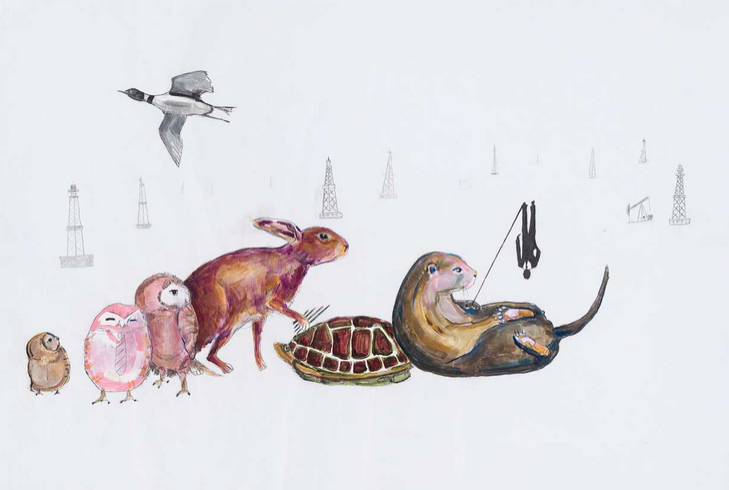 Julie Buffalohead, If You Make This World Bad and Ugly, acrylic, ink, and graphite on mulberry paper, 2014. Image courtesy of Bockley Gallery.

Visual narrative (like any good narrative) tells at least two stories — the tale on the surface and the one lurking in its depths. In a majority of Buffalohead’s works on paper, however, those layers of story are inverted. That is, it’s the subtext that announces itself readily – sometimes too readily. Take Tea Party Day Three: a feminine coyote serves tea to stuffed bears while a small, stiff unicorn randomly stands in the corner of the frame. The delightful fairytale characters pull the viewer in close, but her subject — presumably the lost, or at least suppressed childhood self — is treated heavy-handedly. As curator Christina Chang explains in the exhibition essay, “Buffalohead began working this way when she became pregnant….she was drawn to a process [that was] so much like child’s play.” Perhaps, in this piece, the artist lost herself a bit in that process.

However, in the early 2002 painting, Coyote Dreams as a Pinup Girl, the balance of layers works well: a human female with a coyote’s face and tail strikes a pinup pose against a thick, roily backdrop; above and behind her is a rough-drawn sketch of a Native warrior attacking two corpulent white men in lawn chairs. The artist painted this work while studying under her mentor, Kay Walkingstick, during her MFA at Cornell, and the layers reveal the influences Buffalohead must have been grappling with at the time. Pin Up discloses an awareness of being a female artist in a male-dominated world — where Richard Prince and his Marlboro appropriations reign supreme, where pop culture objectifies Native American women (all women, really), and where that objectified woman “dreams of being a warrior” (but does so in keeping with the dictates of white male fantasy). Buffalohead’s critique of both racial and gendered stereotypes is bold but also nuanced in this piece.

Enrolled in the Ponca Tribe of Oklahoma and raised by a University of Minnesota professor of Native American studies, Buffalohead grew up closely studying her roots. She’s quick to see (and skewer) how mainstream America interprets and typecasts the Native American identity. In the 2014 piece Christina Fallin on a Stick, she specifically addresses the media scandal surrounding Fallin’s misappropriation of the headdress to promote her band, Pink Pony. One of the most recent paintings in the exhibition, If You Make This World Bad and Ugly, takes a Native narrative back to the very beginning of time—the Nakota/Dakota/Lakota creation story. Buffalohead  re-imagines the myth for the present-day, putting the central gang of vividly hued woodland creatures against a background of ghostly oil rigs (or are they cell phone towers?) sketched along the horizon line; one of the creatures in the foreground, an otter, is dangling a tiny businessman from a pole. The original legend concerns a temperamental “Creating Power” who destroyed his first two versions of the earth in response to people’s misbehavior  (as punishment, ironically, “for not acting human”). He then made a third world by taking four animals out of his pipe bag and throwing them into the water to see who could bring back mud from the bottom to establish a new earth. Buffalohead’s iteration of the creation story suggests how the world is, yet again, being made “bad and ugly” by the people who inhabit it.

Establishing a rapport with Buffalohead’s art is slippery business. On one hand, her aesthetic is immediately alluring and her subject matter, without doubt, worth exploring. On the other, I find it hard to take the cuteness of the work that seriously. The dissonance I sense reminds me of something I read several years ago about Marcel Dzama, a Canadian artist who also brings a children’s book quality to his practice. A 2005 New York Times review of his work reads, “Call it cute tragedy or tragic cuteness: either way, it refers to the impulses of a post-Warhol generation that uses the popular art forms of childhood to express a startling array of adult feelings.” That description seems an apt one for Buffalohead’s work as well. She doesn’t create a world as as dark or elaborate as Dzama’s, but she is on a similar track, experimenting with the imagination and imagery of childhood fantasy to grapple with adult anxieties.

In this mid-career exhibition, I see in Buffalohead’s work an unwillingness to let go of the past — the past of her ancestors or of her childhood self. But her refusal to do so isn’t an act of denial as such. And her work may be precious in its appearance, but it’s potent, too. Like the trickster coyote, her paintings play with the tangle of what it truly means to be horrible, wonderful, confused, and sometimes wise humans.

Julie Buffalohead: Coyote Dreams is on view at the Minnesota Museum of American Art Project Space in St. Paul through February 22, 2015. Another show of her prints, Entwined, is on view at Highpoint Center for Printmaking in Minneapolis from February 6 to March 28, 2015.