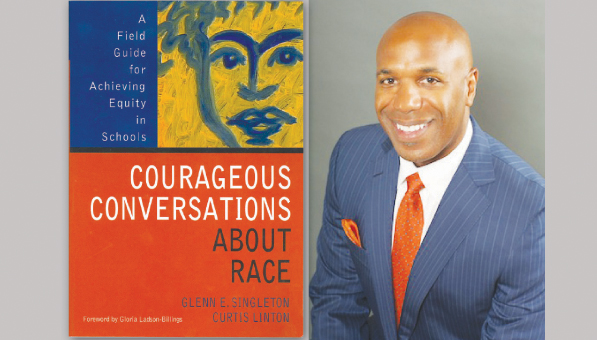 In the recent MSR six-part series on Black suspensions, several school districts — including Minneapolis, St. Paul, and several other Twin Cities area schools — indicated that they are using the Courageous Conversations program in helping to lower their suspension rates. To learn more about this program, we contacted San Francisco-based Pacific Educational Group (PEG) Founder and CEO Glenn Singleton, who recently spoke with us in an extended phone interview.

Asked what makes PEG a better resource than local initiatives or organizations, Singleton answered, “What’s unique about the Pacific Educational Group and the work that we are doing is we are unapologetic and explicitly focused on racial equity as the doorway to achieving overall equity in education. Our work intentionally and explicitly focuses educators on developing racial consciousness and a proficiency at addressing systemic racism.

“We’re not a single workshop, and we don’t generalize around all of the issues affecting the school system,” he noted. “This is our 21st year. I have to say that I am more encouraged than I ever [have] been, and that is because we’re seeing these results in places like St. Paul Public Schools and Eden Prairie Schools. We’re experiencing the kind of success that is heartening.”

Asked specifically what measurement he has used to verify lower suspension rates, Singleton stated, “We measure school systems by graduation, attendance, achievement testing, standardized testing, discipline, and special-ed enrollment. When those data points are showing favorability, then we consider that a successful partnership.”

However, neither St. Paul Public Schools nor Eden Prairie Schools showed improvement according to the data we reviewed.

PEG provides professional development and coaching for teachers and school administrators. “We are really about leadership development and supporting leaders to be able to bring about transformation in the [school] system,” said Singleton. He believes that addressing racial inequities in schools “will lead to a more productive, efficient, and higher achieving school system.

“When students are not engaged in the learning process, they are going to do other things,” said Singleton, adding that there is too much discipline of Black children rather than engaging them. Instead, he advocates creating “relevant learning environments” to better nurture Black students. “You will see different results when teachers understand [this],” he added.

Black students are disproportionately being suspended in schools, said Singleton, a fact documented locally in the MSR series. “The number-one thing that a classroom teacher does when a Black student seems to be misbehaving in the classroom [is] that student is going to be sent down [to the principal’s office].

“We want to ask the teacher what are some other ways that we can engage with this student to change that behavior, not only from behavior that is defined as misbehaving but to a behavior that is seen as productive and contributing to increasing that student’s academic achievement? We want to look at all of the ways in which our policies, programs, and our practices are encouraging that disparity.”

Singleton wants teachers to see Black students “as scholars and not as bad or potential criminals.” He sees his two-decades-plus work “as a calling to give voice and give strategies to educators who really want to see all children reach their potential.

“There are [school] systems that we are still partners with and have been working with us up to 12 years,” Singleton pointed out. “It is about the children that they are serving. And when we begin to surface those beliefs, we can determine which of those beliefs are getting in the way of the optimal outcome where there’s no racial disparity.”

Singleton said the school districts he’s worked with have reported “dramatic improvements” after using his firm. He added, however, that PEG hasn’t always been successful: “We have been engaged by many systems that are not ready to really challenge this very difficult phenomenon that’s been around in our society for hundreds of years. When a system decides that they no longer want to associate, we don’t [judge] that system as a problem or a bad system because so many systems come back to us after a year or two, or even more than two years.

“There are thousands of school districts across the country with these racial disparities that need to be addressed,” said Singleton. “It’s becoming more difficult to ignore the elephant in the room — race matters.”

Singleton wants to “work himself out of a job” by helping school districts become a racially equitable system. “That’s why we are focused on developing leaders — we work with the leadership team and build their capacity to work with the entire system. When a healthy environment for adults does exist, it’s healthier for students.”