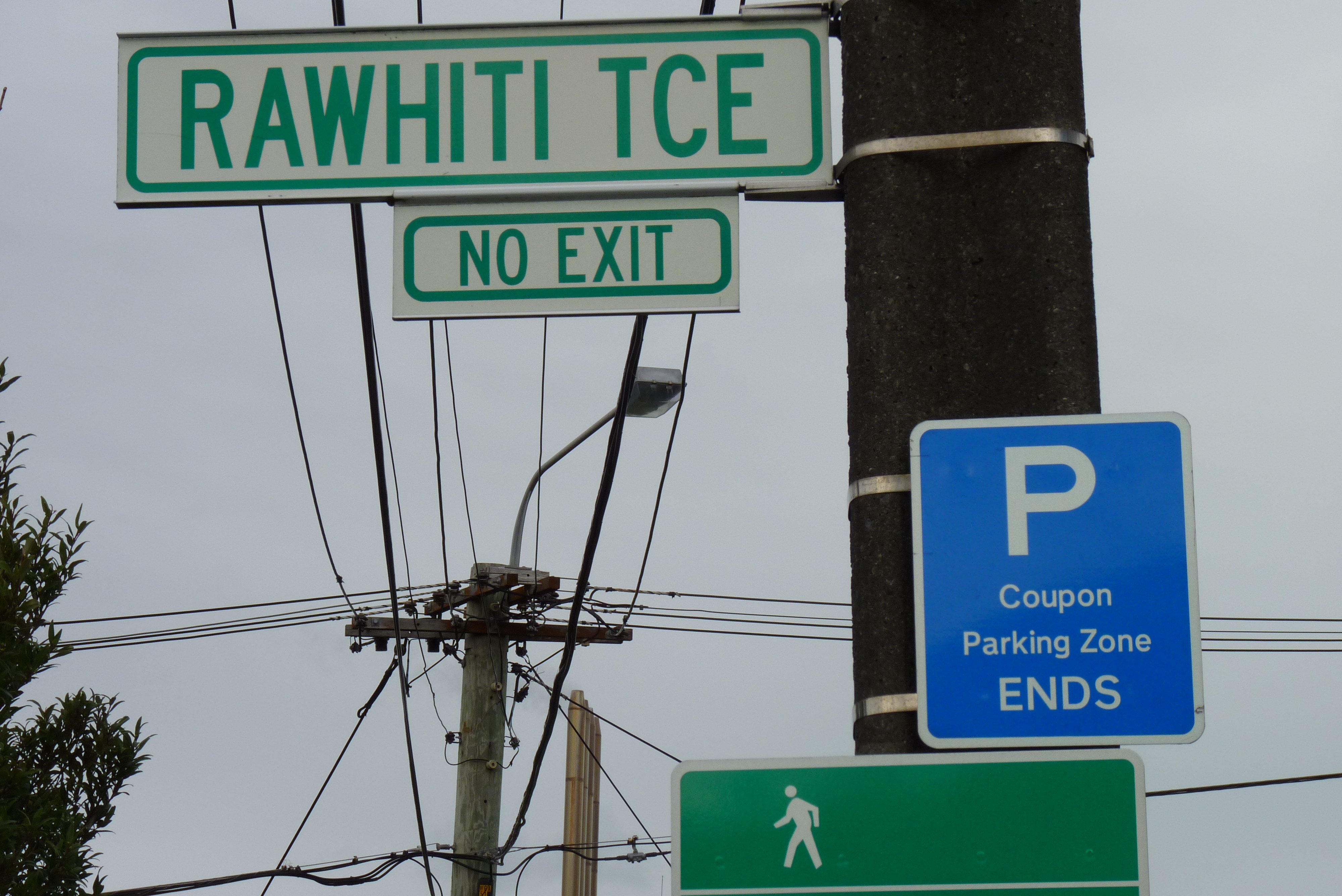 Parking is a quintessentially local issue. There is nothing more local than wanting to park close to your destination, and caring about the parking spot in front of your house. Attend any meeting about new development in the Twin Cities, and the unique “parking issues” of a particular location will be related. Yet “parking issues” in the Twin Cities today are always about too many cars chasing scarce kerbside spaces.

Parking is also, to many Americans, a quintessentially American issue. Americans supposedly have a cultural affinity for cars that Canadians, Australians, and Europeans don’t have. Yet culture is nothing if not adaptation to law and policy over many years. American cities have required and provided free parking to a greater extent than similar cities abroad for several generations. It is unsurprising that Americans expect free and easy parking, after growing up with it.

Both tendencies can blind us what the Twin Cities can learn from similar cities abroad. Minneapolis and Saint Paul—like many cities in Europe, Australasia, and Canada that first boomed between 1870 and 1940—have large areas of moderate density housing served by small commercial nodes. Initially these nodes served locals on foot or off the street car. Now many of these commercial nodes host businesses drawing a driving public from further afield. With limited off-street parking, visitors to popular restaurants and yoga studios and parks search for kerbside spaces in residential streets. Both the cities also have several areas where residential neighborhoods are directly adjacent to large institutions like universities and hospitals, which generate substantial traffic from visitors, students, and staff.

These neighborhoods include Uptown, Loring Park, Como, Marcy-Holmes, Dinkytown, and Prospect Park in Minneapolis; and Grand Avenue, Selby Dale, Highland Park, and around Seven Corners in Saint Paul. Because of their mix of uses, these areas are all desirable for new residential and commercial construction. In all of these neighborhoods there are few opportunities to provide off-street parking without removing existing buildings, and on-street parking spaces are sometimes fiercely contested. In response parts of these neighborhoods have residential permit parking, restricting kerbside spots for residents’ exclusive use.

Residential permit parking is a poor solution to kerbside scarcity, effectively privatizing the public right of way for the benefit of adjacent residential property owners (in Minneapolis a permit costs a mere $25 a year). Permit parking pushes parking problems onto streets without permits, often slightly further away from businesses, and leads to more driving as people search for even scarcer kerbside spots. In some instances permit parking will lead people to change destinations or not travel at all, because of the perceived difficulty of finding parking spaces open to non-residents. Residential permit parking thus disadvantages businesses and other non-residential uses near streets where it applies.

The least worst way to minimize parking problems is to charge something for the privilege of occupying a kerbside parking space. In both downtowns, around the University of Minnesota, and in parts of Uptown, kerbside spaces are metered. We could put meters on the streets in the neighborhoods where kerbside spots are scarce. But meters are not that attractive, and come with a high capital cost (400 new meters cost Minneapolis $6.6 million between 2010 and 2012).

A simpler technology used in cities in Europe, Canada, Australia, and New Zealand is “coupon parking”, sometimes known as “disc parking.” It is little used in the United States, but is used in Eugene, Oregon to charge for parking on residential streets near the University of Oregon football stadium. 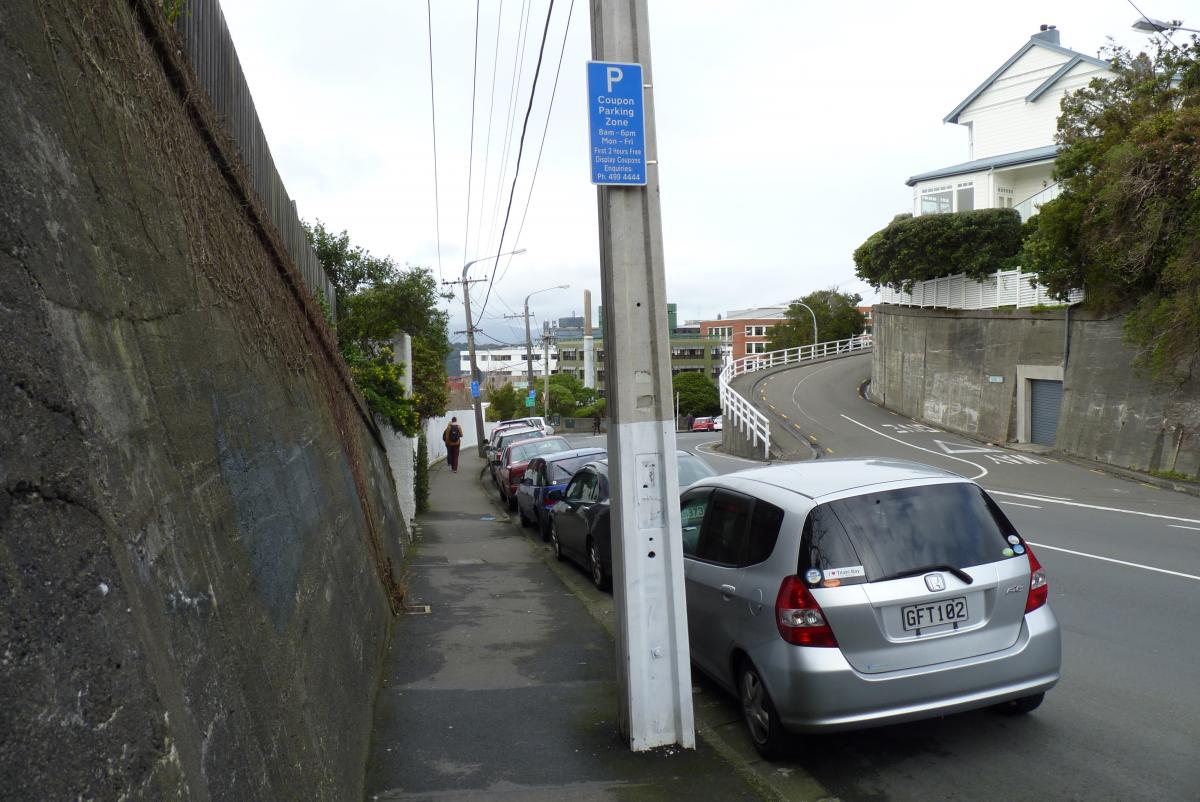 A block of coupon parking zone begins near Victoria University in Wellington, New Zealand. Coupon parking can work even when people drive on the “wrong” side of the road.

So, how does coupon parking work? It is often paired with residential permit parking, in an overlapping or adjacent fashion. Thus, as with permit parking blocks are designated as coupon parking areas with signs posted at regular intervals that drivers searching for kerbside spots will be able to see.

A driver using a coupon to park in a designated kerbside space places a dated piece of paper (the coupon or disk) in the windshield, showing they have paid to park in a coupon parking zone on that specific day. In this respect, coupon parking is just like the machine-based pay and display parking in use at Minneapolis parks. 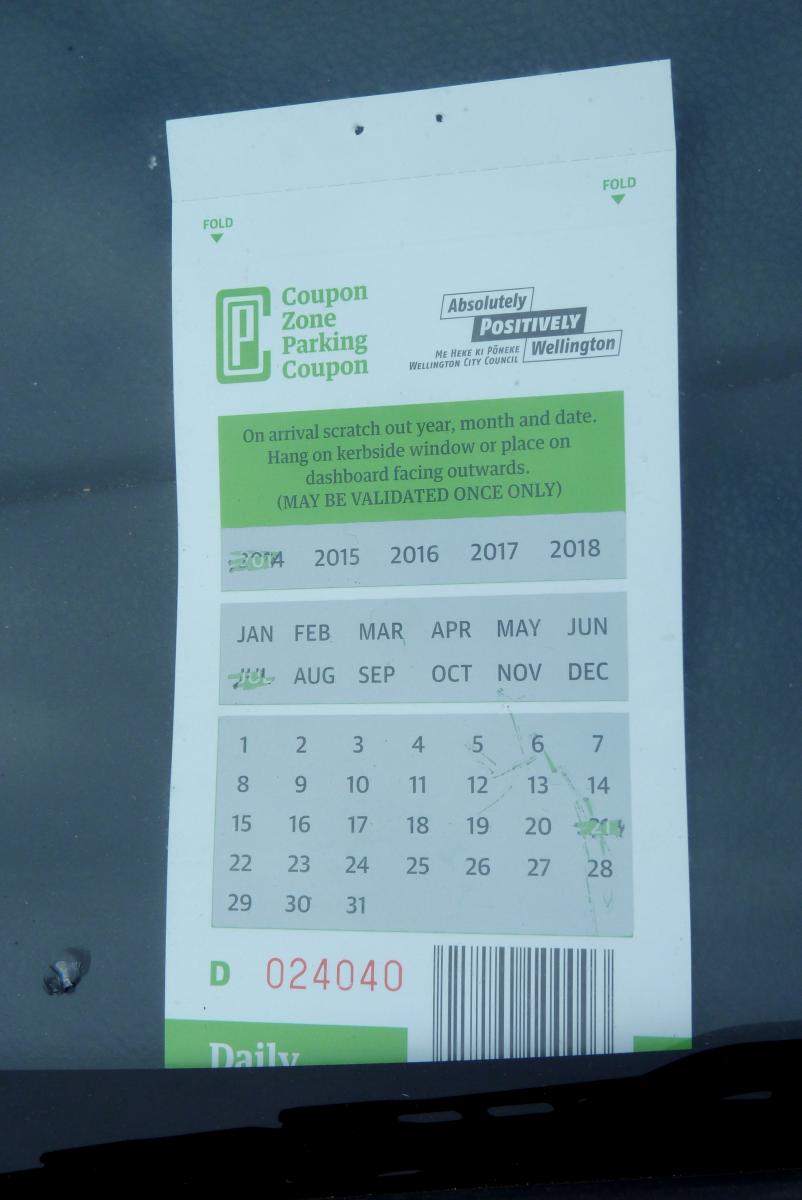 Daily coupon ($7) in Wellington, New Zealand. Just scratch if off like a lottery ticket, and every entry wins a day of parking. 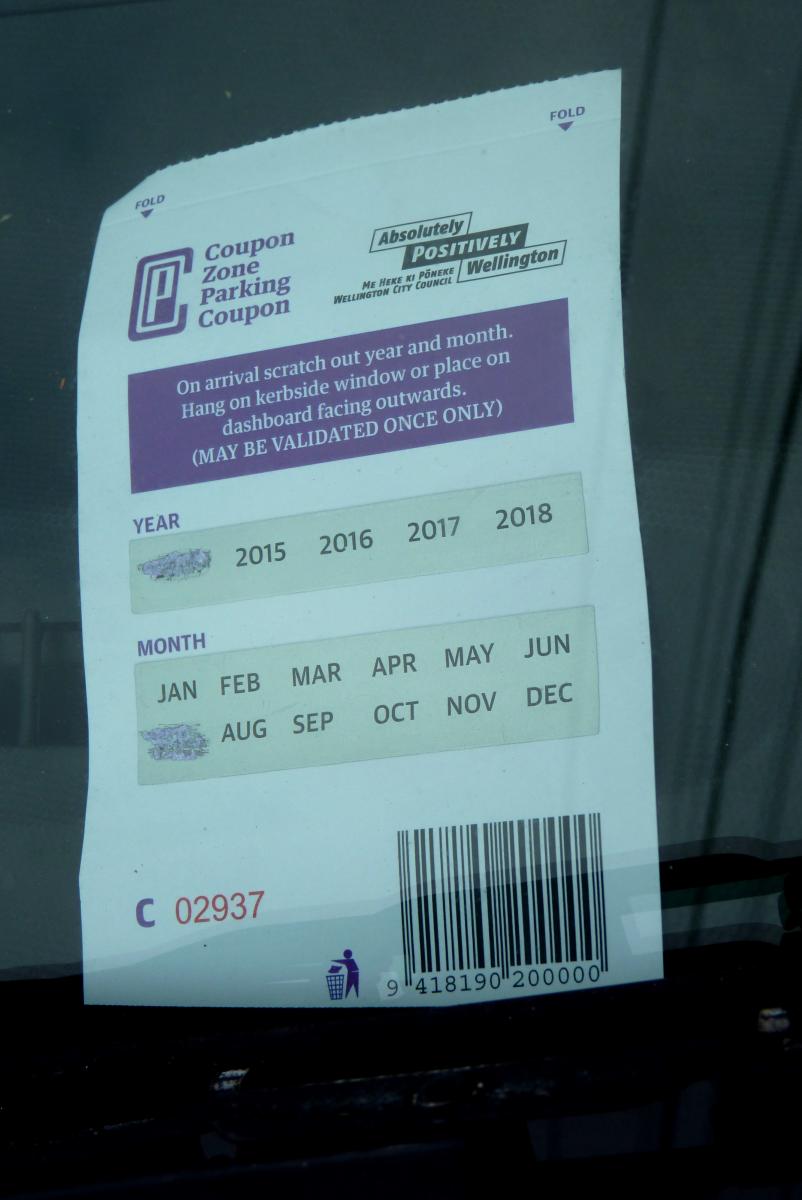 Monthly coupon ($120) in Wellington. Cheaper than contracted spots in a garage.

However, in many overseas cities with coupon parking, coupons can be purchased at convenience stores, supermarkets, gas stations, or directly from the city council. Physically the coupon is just like a scratch-off lottery ticket, with the parker scratching off the date they are paying for. In some cities coupons are available in weekly or monthly denominations, as well as daily coupons. When I lived in Wellington (New Zealand) where coupon parking was in effect, many people I knew kept a few coupons in the glovebox in case they needed one.

And that’s all there really is to it on a technological level, making it relatively easy to price kerbside parking without investing in expensive meters. Slap up some signs, print some coupons, distribute them, and kerbside parking is no longer free in areas with excess demand and the associated conflicts over whose moral claim to a kerbside spot is greater.

The politics of establishing coupon parking in Minneapolis and Saint Paul neighborhoods are, of course, a little trickier. Most importantly, new ordinances establishing the program may have to be passed. Both cities already have provisions in existing residential parking ordinances for temporary visitors’ passes, but these have to be purchased by the property owner. Coupons would be available on a wider basis for visitors to any type of property. Decisions about where to have coupon parking zones and how much to charge per day are partly technical (where are kerbside spots often fully occupied?), but also inherently political by changing who benefits from access to the public right of way.

The benefits to the wider public would be making kerbside parking easier to find. Giving away kerbside spots for free in areas of high demand often leads people to cling to parking spaces, even when turnover and thus open spots would benefit everyone. In Wellington, coupon parking was introduced in areas near universities and hospitals that often saw a flood of people searching for kerbside spots in the early morning, and then staying all day. Coupon parking reduced some of these problems, so that it was possible for people arriving later in the day to find spots (in big cities we are never going to solve parking problems to everyone’s satisfaction, so I blanch at saying anything will “solve” problems).

What about benefits for local residents? By pricing kerbside parking in areas of high demand coupon parking could reduce pressure to privatize kerbside spaces by establishing residents’ only critical parking areas. Neighborhoods that demand “critical parking” restrictions are at some level very selfish, claiming the public right of way for their own car storage needs. But at another level they correctly identify that they live in an area of high demand for kerbside spaces. Coupon parking in conjunction with annual permits for residents would help balance the demands for kerbside spaces in several Twin Cities neighborhoods, and keep the public streets open for all to park on. For a small price.

By raising real money coupon parking is also an opportunity to create parking benefit districts in Minneapolis and Saint Paul neighborhoods. Money from the coupons could be returned to neighborhood associations or local business associations to spend on improvements to the public streetscape and other neighborhood amenities.

The introduction of coupon parking would also be an opportunity to re-consider the absurdly low prices Minneapolis and Saint Paul charge for residential permit parking ($25/year and $10/year respectively). It is unlikely that these charges even cover the costs of administration and erecting signs. Both cities should consider charging $500 annually for residential parking permits. Compared to the cost of a garage or the daily rate for coupons, $500 is an absolute bargain. Politically it would be difficult to move from the current low prices. A compromise solution would be to charge existing residents the current rates at their existing residence, but a person getting a permit in a new location (or their first permit) would be charged the higher rates. If prices can’t be reformed, more limits should be set on the number of permits allowed per household. Minneapolis, for example, allows each member of the household to have two permits. In comparable cities in Australasia and Canada, cities limit the entire household to two vehicles.

How much to charge for daily coupons? When I have discussed this idea in Prospect Park, several neighbors have astutely noted that students park in the neighborhood and walk to campus to avoid paying the $4 rate for single occupancy cars at the U carpool lots, and have suggested a $4 daily charge for coupons would eliminate the attraction of neighborhood parking. A similar calculus applies in other neighborhoods adjacent to the U. To keep coupon parking simple (crucial for public acceptance) a uniform charge across the city is appropriate. Whether it’s $4 or $5 or $3, the crucial step is that people are no longer getting kerbside spaces for free. Having to pay something, having to pay anything, reminds people that parking is not free, and that realization can nudge people to take alternative modes or carpool.

It’s a simple idea, it’s worked overseas in cities of similar density and land-use patterns. And now is the time to contact your council member and mayor, and suggest we try it here.