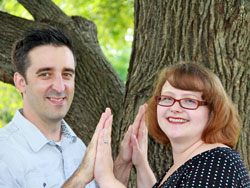 Jess and Anna Heitland want to adopt—so much so that they have created a Facebook page entitled “Jess and Anna Want to Adopt,” a gmail account (using the same handle: jessandannawanttoadopt@gmail.com), business cards, window decals, YouTube videos, a craigslist ad and a website, www.JessAnnaAdopt.com. They have also posted their profile on a third-party site called Adoptimist.com.

The Heitlands began their journey to adoption in September 2011 with the traditional home studies and interviews for Lutheran Social Services that most adoptive parents have done in the past, plus they created their pages for “the book,” a resource for birth mothers. The book is a scrapbook in which prospective parents are allowed four double-sided pages to attach the two forms everyone fills out, write notes, post pictures and generally state their case for being the best match for a baby.

The Heitlands decided that it would be in everyone’s best interest if the adoption were open, meaning the biological and adoptive parents have access to some personal information about each other. Michelle Frazier, senior program manager of infant adoption at Lutheran Social Services of Minnesota (LSSMN), says 95 percent of all adoptions completed through the infant adoption program include some degree of openness; the organization promotes open adoption for all, but honors the wishes of birthparents who choose closed adoption.

Lutheran Social Services provides online classes and a day class onsite that give prospective parents the tools they need to be as involved as they wish in the adoption process.

“Adoption can include an emotional wait for many families, so for some families, adoption outreach is a good fit because it empowers families to make their own choices and be more proactive with their adoption plan,” says Frazier. “Families range in their comfort level with engaging in adoption outreach. Some families choose social media, some choose to include their personal network, and some choose to not utilize any outreach options. At LSS, we strongly believe in empowering our families to use technology and their personal networks to inform others about their interest in adoption.”

The Heitlands, who met as students at the College of Visual Arts in St. Paul, were familiar with both technology and design and so were excited to take an active part in the adoption process. The Facebook page was up and running in June and the website in September.

“You just have to offer yourself to the world and hope the right connection happens,” says Jess, an interactive designer who works in social media. “We rely on friends and family to share our page so that it makes it available to people we have never met.”

Since June 18, their Facebook page (which is open to anyone on the web) has had more than 150 “likes,” reaching an audience of more than 2,000 people in the United States and people from at least 20 other countries.

“We’ve noticed that many people have questions about open infant adoption,” says Anna. “The Facebook page allows us to enlighten friends, family and other acquaintances. Hopefully, someday, especially with social media, outreach won’t be such a secret.”

The people at Lutheran Social Services are finding that the use of social media in adoption is becoming more common. Frazier says that they don’t know exactly how many adoptions are influenced by social media, but they are seeing an increase in the number of birthparents who start their search for an adoptive family on the internet. “Each year typically over half of the adoptions we complete are designated adoptions,” Frazier says, “which means that adoptive families and birthparents are connecting on their own and coming to LSSMN for adoption services.”

The Heitlands are realistic about how long they will have to wait to find a baby—a domestic open adoption generally takes two years. But they know they will move up on the list, and they feel that taking some control in the outreach process may help them make a happy connection for birthparents, a child and themselves that much sooner.