In October 2012, Edward McDonald was appointed director of the Council on Black Minnesotans (COBM). The process began when he was approached by friends and colleagues who thought he would serve well in the role.

Raised in Milwaukee, Wisconsin and completing his undergrad studies at the University of Minnesota Duluth in 1980, he received a post-graduate degree as a legal assistant and completed his graduate studies at Harvard University, John F. Kennedy School of Government. He returned to the Twin Cities in the early ’90s, working as public policy manager for Family and Children’s Service.

Now married for 32 years with two adult children, he has lived in Oakdale, Minnesota since 1994 but says he is not disconnected from areas with a larger population of people of African descent.

After a three-year stint working on tenure certification in the Wisconsin university system, he began hearing from friends and former colleagues that the council was looking for a new director. “It needed — according to them — somebody that could get on the ground and get it back towards an upward trajectory,” he explains. 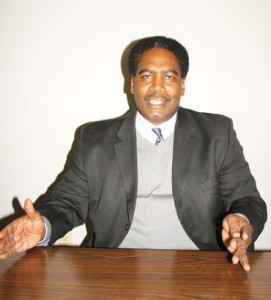 Some of the conversations were initiated by community elders and leaders, many of whom asked, he says, if he would consider the position. “So I threw my hat in and was fortunate enough to get the opportunity to lead such an important organization.”

He was drawn to the council because of it uniqueness. Created in 1980, the COBM was one of five councils combating underrepresentation in the legislative process among people of color and those with disabilities.

In its formative years, many viewed the council as imperative to creating inclusive legislation in areas of the state with little representation from people of color, many of them currently undergoing rapid demographic changes.

“So I saw it as important,” McDonald explains, “and something that obviously has a big impact on influencing how the quality of life of African Americans and Minnesotans in general will be.”

No stranger to initiating accountability measures, McDonald was assigned to work in the mid 1990s with the Minneapolis NAACP to ensure compliance in the redevelopment of the Sumner/Olson public housing project, leading to a collaboration with the Urban League and Summit Academy OIC in recruiting low-income residents to work on the project. Thor Construction provided training for workers of color. He subsequently worked as an affirmative action officer for the City of St. Paul and administrative coordinator for planning and economic development.

He also worked with the National Association of Minority Contractors to change the way the City of St. Paul interacted with businesses owned by people of color through their procurement system. In 2003, McDonald filed a whistleblower complaint against the City, leading to an audit of bidding applications that in turn led to the human rights department managing all City construction contracts along with an outside entity.

Before becoming COBM director, McDonald says, he was familiar with the work of the council. “I had been brought in on occasion by Lester Collins, working on various state legislative initiatives.” Working with the Minnesota Housing Partnership, he coordinated their Right to Housing Campaign, leading to the Livable Communities Act, which he says, “Was one that aligned itself with some of the goals of the council at that time.”

“We believe the cry for racial justice, equity, the social sciences in higher education reports on disparity, [are all] really linked to how you administratively apply civil rights and equal opportunity laws.” McDonald explains. “What we heard people say is that they want to move beyond this notion of tolerance to a place where there was growing liking and loving of each other.”

The word the COBM settled on to explain this concept, which is woven throughout their legislative agenda and serves as a backdrop for all council initiatives, is “allophilia,” a Greek word that encapsulates intergroup love as well as cross-cultural love.

“In this country and other places, [where] you’ve had extreme prejudices, we are being asked to camp out in a place where tolerance is acceptable. And as human beings we think that we can do better than that… So,” says McDonald, “our legislative agenda is the policy prescript that would need to be put in place in order for that to permeate the marketplace.”

A large part of what the council has done in the past is organize the annual state-commissioned MLK celebration. Just a few months into his role as director, McDonald and the COBM brought together approximately 350 people during this year’s 12-below-zero early-morning celebration of Dr. King’s legacy.

“It changed a little bit in that we didn’t do it at [Concordia University’s] Ganglehoff [Center], as it has traditionally been done,” he says. “It was kind of solidified and organized around Central High School, which was important. And we kept the commemorative march in place.”

The most significant difference from years past was the discussions among attendees of topics they felt were important to concentrate on at the legislature, conversations that served as a catalyst for creating a COBM legislative agenda.

“The emphasis in this legislative agenda is really taking a strong look at how the state is enforcing human and civil rights,” says McDonald. “There has been no net increase to come into that [Human Rights] Department in roughly abut 15 years, which means there has been a decrease in funding to the department.”

Since the MLK celebration, in partnership with the Minnesota Humanities Center and the State Legacy Fund, the council has held legacy tours of seven Minnesota cities with high concentrations of Minnesotans of African decent, providing cultural meals for attendees and encouraging dialogue.

“[We] had some real candid discussions about issues affecting them in those areas as well as the perception of things that were happening statewide,” McDonald explains. “From that we generated a report, and the report isolated five themes that people thought — when you consolidate all the information — would be important for us to put some substance to and bring to the legislature.” The five themes are:

Statewide committees also grew out of the discussions held during the tours.

During June 28-31 this year the COBM will be holding a Minnesotans of African Decent Cultural Relations Summit made possible by a $100,000 legacy funds grant. The three-day event will include cultural entertainment, and McDonald is hopeful that it will bring together representation from the 23 African nations that are currently present in the state, building on the notion of allophelia.

Attendees will have the opportunity to take a DNA test to learn what African nation(s) they are descended from, and the COMB will be working with artistic and cultural institutions to identify ways they can strategically align themselves to compete for legacy funding. “The council wants to be a conduit for that,” McDonald says.

In the near future, the council will be hiring a documentarian to create a documentary of the contributions of Africans and African Americans to Minnesota over the past 100 years. They will also be hiring a web developer to redesign their website in hopes of becoming “the cultural portal to Minnesotans of African descent for those of us that live here in the state, and those outside the state and around the world that want to know and link to the 23 African nations that exist here now.”

McDonald admits that the COBM has gone through a period of organizational redevelopment, but he says their strength now exists in putting “purpose and mission ahead of personal and petty things. People tend to pull together, and they find their lane and are able to bring their skills to the table and move our community forward.”

To read the full COBM legislative agenda, visit their website at www.cobm.state.mn.us.