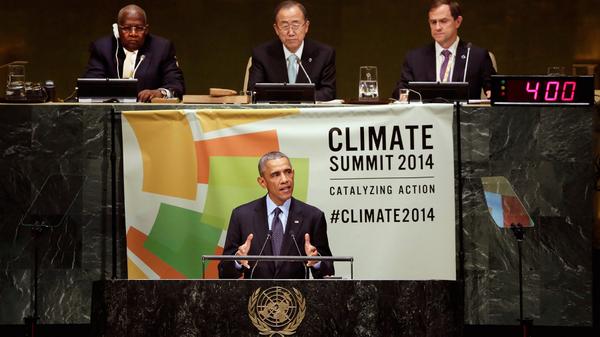 The controversial Global Alliance for Climate Smart Agriculture (GACSA) was officially launched yesterday at the U.N. Climate Summit. The announcement came in the wake of rising criticism from civil society, including IATP, about the intentionally vague term “climate smart” versus the more established science of agroecology, as well as the corporate-led participation of GACSA.

The agriculture session of the summit, where GACSA was announced, took place late in the day, after countries had made their declarations and commitments. Earlier, President Obama began by naming climate change the defining issue of today—above terrorism, instability, inequality and disease. “Deepening science says this once-distant threat has moved firmly into the present,” he said, adding that “we need to work together as a global community to attack this global threat before it’s too late.”

Unfortunately, the president’s support of “Climate Smart Agriculture”—the latest corporate spin on false solutions—only contradicted his urgency as he, like GACSA, failed to bring agroecology into the fold. He said that the U.S. has helped farmers around the world practice Climate Smart Agriculture by planting “more resilient crops”—referring to seeds genetically modified to be drought resistant.

The afternoon agriculture session of the U.N. Climate Summit attempted to put a bright shine on Climate Smart Agriculture and GACSA. The Dutch Prime Minister kicked things off by outlining the three “aspirational” outcomes of GACSA: 1.) sustainable and increased agricultural productivity and incomes; 2.) greater resilience of food systems and farm incomes; and 3.) reduced greenhouse gas emissions wherever possible. These outcomes are vague at best, and invitations for corporate agribusiness to push more yield-promoting genetically modified seeds and chemicals at worst.

Several African country government delegates expressed support of GACSA, including the representative from Niger who stated that investment in fertilizers could have helped minimize Africa’s suffering from drought in the past. The representative from the Southern African Confederation of Agricultural Unions said that “indigenous knowledge and wisdom are no longer enough” and that new technologies are needed to adapt to climate change. These claims place power in the hands of the companies creating and selling agricultural technologies and fertilizers, including companies like Syngenta and Yara, who also signed on to GACSA.

Much of the 50-minute agriculture session was taken up by addresses from the CEOs of McDonald’s and Walmart, two of the signatories of GACSA. McDonald’s CEO Donald Thompson began by stating that even though McDonald’s “only” sources 2 percent of the world’s beef, it pledges to source only verified sustainable beef by 2016. Thompson acknowledged that the beef industry does not have a current definition of sustainable, but that McDonald’s is working with Walmart and others to create such a definition. This essentially allows McDonald’s to create whatever definition it desires and market it as both sustainable and Climate Smart.

Walmart’s CEO, recognizing their position as the world’s largest grocer, announced its own strategy to create metrics for suppliers to assess water use, greenhouse gas emissions, yields and more. Not mentioned was the fact that they are the world’s largest grocer because of their low prices, including low wages for workers and low prices for farmers, which often come at the expense of important environmental and social safeguards.

Apart from a two-minute statement from Civil Society read by Sonali Bisht of the Institute of Himalayan Environmental Research and Education, which emphasized agroecology as the real solution to climate change impacts on agriculture, there was no mention of agroecology or agroecological initiatives in the agriculture session. Part of Bisht’s statement called out false solutions which claim to address climate change but are actually pushed for profit-making purposes—a direct jab at GACSA and its greenwashing of the words “Climate Smart” to serve its corporate members.

In his address, President Obama also asserted that this is the last generation with the power to stop climate change before it’s too late. This message was echoed by many world leaders, who voiced recognition that climate change is a massive environmental, economic, and social problem. Given the consensus of the gravity of the challenge we all face, corporate interests cannot be allowed to interfere with the real solutions we need.