An anti-corporate farming law in Minnesota may be helping to keep farmland prices in the state from inflating into the large bubble that appears poised to burst on the American farm economy the way inflated home values collapsed during the Great Recession.

Minnesota is one of nine Midwest states to have a “corporate farm law” widely called an “anti-corporate farming” law. It restricts hedge funds, pension funds, limited liability companies and most corporations from owning, operating or leasing farmland.

Farmland prices have steadily climbed in recent years, helped by strong farm commodity prices and more limited returns from other investments since the Great Recession. But evidence gathered from financial surveys and an annual University of Minnesota land study suggest Minnesota prices haven’t soared like those in other states where land isn’t protected from Wall Street or outside investors.

Minnesota is a “family farming” state, which means that if land prices have blown into a bubble, other family farmers are causing it, said Paul Brutlag, a Wendell, Minn., farmer and attorney. That doesn’t mean there isn’t some land speculation going on, he said. It means corporations and investment funds aren’t dumping surplus cash into Minnesota land and pricing it out of reach of other farmers.

Dave Saxowsky, an associate professor and agricultural law specialist at the North Dakota State University’s department of agriculture and applied economics, said it is difficult to tell how much corporate farm laws may be curtailing a full-scale farmland bubble in states such as Minnesota and North Dakota. “I’ll grant you they are keeping pension funds and trusts out of the market,” he said. 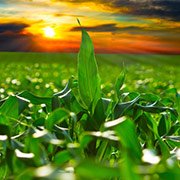 North Dakota, South Dakota, Nebraska, Kansas, Oklahoma, Minnesota, Iowa, Missouri and Wisconsin have all had corporate farming laws, according to the National Agricultural Law Center at the University of Arkansas. The Center for Rural Affairs at Lyons, Neb., however, found legal challenges weakened or negated meaningful portions of those laws in a majority of the states, but not in Minnesota.

Farm and bank worries of a possible return to a Farm Financial Crisis (1982-1987) era, may help hold the Upper Midwest’s bubble in check. A self-proclaimed “North Dakota farm boy,” NDSU’s Saxowsky purchased two parcels of land in recent years after factoring a 5 percent returned on investment.

That bettered the 3.5 percent return he anticipated from other investment options, he said. Like many farmland purchasers of recent years, his small acquisitions were not financed and didn’t add debt service costs to his balance sheets.

There is nonetheless evidence farmland is in a bubble. Nobel laureate Robert Shiller, who accurately forecast the housing bubble burst before 2008, warned a farmland bubble might be bursting in interviews following his award in October.

How that might play out in Minnesota is difficult to tell. What on the surface looked like conflicting data came in August from the U.S. Department of Agriculture, in a survey from farmers; the Minneapolis Federal Reserve Bank, in a survey of regional bankers; and from the University of Minnesota Extension Service’s Steve Taff, who does an annual study of actual land transactions.

Taff found land prices in prime corn and soybean counties of southwest Minnesota climbed another 9 percent in 2012, to average $6,600 per acre. But overall, Taff told the Pioneer Press land prices last year were little changed from 2011.

What makes this look like a bubble is that land prices are going up as farm commodity prices fall.

In writing about the Taff and USDA studies, the Star Tribune cited farm management studies showing it cost the average Minnesota farmer $4.52 to produce a bushel of corn last year when prices averaged $6.71 per bushel during November. Most farm input costs have risen since then.

Corn for December delivery trading Tuesday on the Chicago Board of Trade had prices bouncing between $4.26 and $4.28 per bushel. Prices paid in the countryside are lower than the nearby futures contract.

Assuming there is “an average” Minnesota farmer somewhere, and that production costs are essentially the same as in 2012, this means a loss of more than 25 cents for every bushel of corn being combined this year. That has the appearance of a bubble ready to burst.

“How many bubbles do we need to go through before we get the message about bubbles,” asked Minnesota Secretary of State Mark Ritchie, an agricultural policy specialist for the Minnesota Department of Agriculture during the Farm Financial Crisis of the 1980s.

The Minnesota law, created in 1973 and amended 30 times since, states as its purpose “to encourage and protect the family farm as a basic economic unit, to insure it as the most socially desirable mode of agricultural production, and to enhance and promote the stability and well-being of rural social in Minnesota and the nuclear family.”

The law, Ritchie said, “is working as intended.” It may not be enough. It didn’t prevent the collapse of the farm and resource based economies of the 1980s. A global financial crisis, a collapsing U.S. economy, or anything that disrupts trade could burst an asset bubble at almost any price.