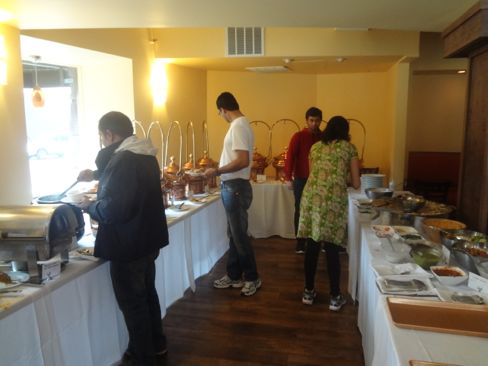 weekend buffet at the Copper Pot

I hope this doesn’t sound like ethnic stereotyping, but over the years it has been my experience, that when I walk into an ethnic restaurant, and every table in the place is occupied by customers of the ethnicity in question, that’s a pretty reliable predictor that the cuisine is going to be both good and authentic.

That was my experience on a recent Sunday when I walked into the Copper Pot Indian Grill, the new Indian restaurnt in the Lumber Exchange Building at 5th and Hennepin in downtown Minneapolis at lunchtime, and discovered a dining room packed with people who looked like they came from India. (I suppose some of them could have been from Pakistan or Sri Lanka or Bangladesh, but let’s not get too far off topic.) Every table in the place was taken, but I was able to grab a seat at the bar.

The crowd had come for the Copper Pot’s grand weekend buffet, which must be the biggest Indian buffet offered in the Twin Cities. (The South Indian vegetarian buffet offered at the late, great Udupi Cafe was bigger, but that’s ancient history.) I can’t remember half of the items on offer anymore, but they included a good mix of northern and southern dishes. More than half the entrees were vegetarian, made with eggplant, paneer, chickpeas, and lentils, etc., but there were quite a few non-veg dishes as well, including a chicken tikka masala, cashew chicken, a chicken biryani, a fish curry and crab cakes. There was also a corner devoted to chaat, the Indian street snacks, as well as traditional Indian sweets.

Most of the buffet was self-service, but one cook stood behind the buffet table, cooking up miniature masala dosas on a tabletop electric griddle. When I went through the line, the cook and the customer ahead of me discovered that they were both from Hyderabad, and a brief conversation ensued.

P.S. Check back Monday for another mini-review. I have a whole backlog of deals and discoveries that I haven’t had time to write up, so I’m planning to dish them up daily until I run out. (We’ll see how long that lasts.)