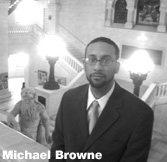 Much of the ongoing wrangling between the Minneapolis Police Department (MPD) and the city’s Civilian Police Review Authority (CRA) over authority, accountability and self-discipline boils down to a difference of views about power, who should have it and who should not. Especially at issue in this case is the power to discipline police officers based on recommendations from a civilian group, the CRA. In the words of Ward 13 City Council Member Betsy Hodges, “The biggest point of contention is discipline.”

Interim Civil Rights Director Michael Browne identifies as one source of this contention the longstanding role of the Minneapolis Police Federation. In his February 2006 study of the CRA, he describes a structural issue within the union:

“The rank Lieutenant, or…Captain, are equivalent to managers…this is in direct contradiction to the separation principles of rank-and-file employee and managers because since 1972, the Police Federation of Minneapolis has represented police officers up to the rank of captain who are employed by the City of Minneapolis and the Minneapolis Park and Recreation Board.”

The report suggests that discipline under this operational format breeds a “conflict of interest” with civilian oversight. “Everybody in the Police Federation Union all the way up to the rank of captain are essentially supervising and managing their subordinates. They are all in the same union…the same collective bargaining union. That’s the only union like that in the entire city enterprise.”

Browne further suggests that to understand the situation one should look back to the first wave of immigration into the United States and the subsequent growth of unions that “imparted rights to the working class or uneducated whites.” Among these were police unions made up mostly of the “Irish, Italian, and Scandinavian immigrants who became White.”

One of a police union’s duties is to provide “protection from arbitrary decisions of elected officials; therefore, one is permitted to execute their job without threat of removal by an elected official,” says Browne in the report. This evidently extends to protection from any civilian interference: “As the CRA board recommends discipline to an officer, it triggers the police union’s labor agreement. It [then] becomes effective civilian oversight versus a collective bargaining agreement.”

Since 1972, there has never been a person of color on the Minneapolis Police Department (MPD) Federation Board of Directors. Also, based on Minnesota’s rapidly changing racial demographics, there should now be 296 police officers of color on the force for it to reflect the composition of the community it serves. (Minneapolis is now 37 percent people of color.) Currently there are approximately 800 MPD officers, 139 of whom are of color.

Perhaps the lack of diversity on the force has led to the failure of officers of color to be elected to the MPD Federation Board. “With diverse minds come diverse decisions, and one tends to do things differently,” Browne observed.

Contrasting views
CRA Manager Samuel Lee Reid makes the case for the CRA’s authority: “The CRA wants the power to do its job effectively…to do what the citizens of Minneapolis are paying for, [that is] for us to give a service. This is what citizenry demands, what it wants and what it expects.

“There shouldn’t be any worry about holding police accountable and [whether or not they’re] doing their job…if that’s the case, they need to be fired,” said Reid. He plans to improve the CRA’s functioning by:

• Increasing community and police understanding of the function of the CRA. “We’re a neutral investigation agency that will show fairness to the complainant and the police officer.”

• Ensuring that police officers are doing their job and not operating from the perception of “we’re out to get them. It’s dirty work when these situations arise… Nothing personal, I’m just doing my job…and doing what the citizens want,” said Reid.

“If I don’t know how you’re going to treat [us], I don’t necessarily want you here,” Reid said of the trust factor that needs to exist for real police/community relations to exist. “If you have a strong CRA, the city has a mechanism to build and strengthen trust between the police department and the community — should they choose to do so.”

MPD Deputy Chief Don Harris, on the other hand, sees the problem as one that can be corrected by departmental reforms, eliminating the need for civilian review. “We’re in a community where the police department doesn’t have the ability to police itself. I want to see [the CRA] un-needed, so we can gain trust back from the community.”

The way Harris sees it, there are a number of options to pursue, including:

• Authorizing the Internal Affairs Unit (IAU) to conduct internal and external investigations as a model for civilian oversight.

• Formulating a field inspections unit where someone other than the officer reviews misconduct cases.

• Creating an insurance unit with an internal audit.

Former Minneapolis Civil Rights Director Jayne Khalifa, in a previous Spokesman-Recorder article, questioned the credibility of police disciplining their own given the present climate of distrust. “[Chief McManus] has made it clear [that] his preference would be that an outside entity not be allowed to make decisions about whether or not a police officer has been engaged in inappropriate behavior. He’s the chief; I understand his desire to be able to run and address and deal with the issues in his own department.

“However, the public has spoken. And as I said to him — There may be a day when you are such a trusted police chief that people will really come to the police department to file a complaint against the police. But that day isn’t today.”

A city council fix?
Michelle Gross, vice president of Communities United Against Police Brutality (CUAPB), takes a skeptical view of the city council’s willingness to give the CRA the power it needs to fulfill its mission. Having worked with City officials as the chair of the outcome subcommittee for the CRA Redesign Plan upon its re-emergence in 2003, Gross holds that “In large measure, the issue is that members of the city council have never been able to hold police accountable. It’s not politically popular because during elections they seek endorsements from the Police Federation, which has an inordinate amount of power in the city.”

Council Member Hodges’ draft amendment of city charter ordinance 172.130 was formulated “after reading the [Minneapolis] charter which states that the final right of discipline is in the hands of the police chief and the mayor…not in the hands of the CRA,” she said. But police resistance to shifting that disciplinary authority to the CRA has led Hodges to revise her amendment.

Assistant MPD Chief Sharon Lubinski explained, “The Hodges amendment was taking away [the chief’s] discretion in handling cases. There’s no [city] in the country where that has happened. It takes away the most critical way of dealing with the police officers.

“[The revised draft] still gives the option of no discipline,” said Hodges, “but the police chief has to respond within 30 days… At most he or she could ask for an extension [rendering] a decision in 60 days maximum. This is hard [for people] to accept because the police chief has let cases languish on his desk for so long, but I’m dedicated to [propose] the necessary amendments to ensure that this does not happen.”

One such amendment that Hodges has begun work on is an annual performance evaluation for discipline. “The CRA may [report] failure to discipline at any time. If the police chief is not in compliance, they would be subject to disciplinary action. The aim is to maintain integrity with the CRA and to prevent cases from being investigated by internal affairs.

“What is not in public debate is the power given to the chief by the Police Federation to declare a case sustained or not sustained, which I am adamantly opposed to,” said Hodges. “By charter, no one has the power to overturn a designated sustained case.” She suggests that disciplinary action taken by the police not only targets police misconduct, it also substantiates the work of the CRA.

“It is a huge disappointment when we adjudicate a citizen’s complaint, there is a finding, and the chief does not issue discipline, because it cannot become public information,” said CRA Board Member Julian Johnson. “The citizens of the city are under the impression that there is a process to seek redress, but it is ineffective because it has no teeth.”

In an effort to compensate for this lack of visibility, CUAPB builds complaint files available for the community on its website. “It calls out the police administration,” said Gross. “There are some [officers] in our files that have 26 complaints, and others that have even been promoted after an ethics violation.”

“There is nothing being done because the community is in the dark,” said Johnson.

Hopes for the future
Minneapolis NAACP President Duane Reed thinks there could be a lot done if the terms of the CRA Taskforce were different. At the public hearing on August 30, he said, “The workgroup needs to be paid, elected, or appointed to support anything with teeth and of instrumental objectivity on the books.”

CRA Board Chair Michael Weinbeck is optimistic for the future of the CRA Board: “There have been changes that are promising,” he said. There is a new CRA liaison, Assistant Chief Sharon Lubinski. “[Deputy Chief Don] Harris was the link, but that never bore the fruit it was supposed to bear.”

Said Lubinski, “I view my role as being able to significantly increase the amount of communication…to have a strong process to deal with problem officers and the problems overall. I’m dedicated to providing better police services by doing that.

“Building relationships is the foundation,” she said. “We’re moving forward in a good direction. The chair and the present city council have taken more of an active interest in the health of the CRA… [They are] involved in the process and are interested in solving the problems.”

“Lubinski is a good advocate for policing and thinks the CRA could be part of that,” said Weinbeck. ”This is a step in the right direction and makes us much stronger than we have been in past.”

“One of the reasons Michael Browne included a workgroup was to create a process so that all parties involved can work together,” said Council Member Hodges. “That way, the police chief will be working within a process that he or she has supported and accusations of a poorly-run CRA are no longer valid… That itself should result in more disciplined cases.”

For the future, Hodges maintains, “I care and am passionate about the issue of police misconduct, and I want to make sure the new police chief is willing and able to uphold the work of the Minneapolis Civilian [Police] Review Authority.”

Ward 2 Council Member Cam Gordon reflected that “It’s difficult to share authority and power. That rests with the mayor…having better cooperation with the chief to execute discipline. There are standards regarding officers. We’re working [toward] communications, quality of investigations, confidence, and accountability, to build trust that the CRA is doing good work… There is a mutual goal, but there is still work to do.”

The future of community policing in Minneapolis may ultimately hinge on a satisfactory resolution to this power struggle over discipline. “There [will never be] community policing if you have an element of the citizenry that distrusts and have been mistreated,” said CRA Board Member Julian Johnson. “How can community relations be improved without any police accountability?”