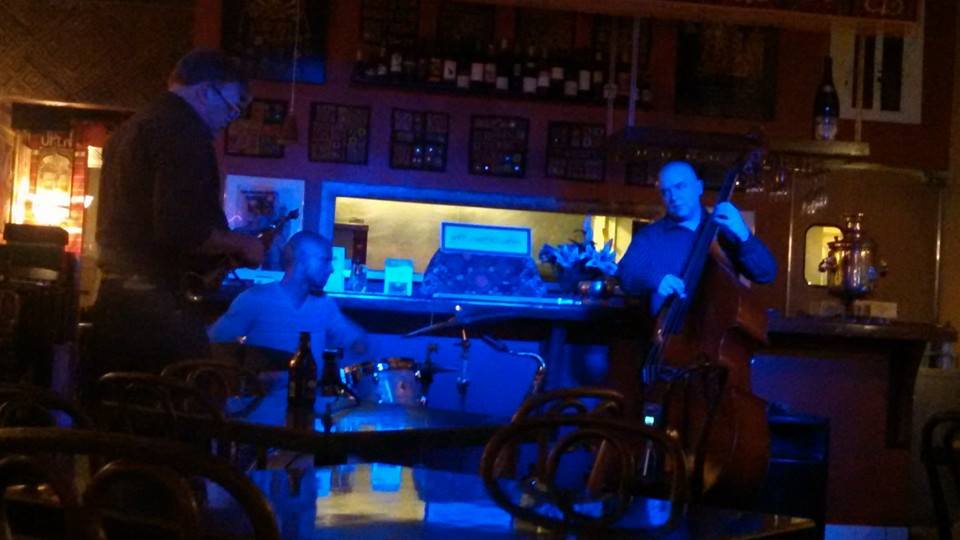 I walked in a little late and I was delighted to hear old school cool Audrey Hepburn (Funny Face) jazz, which delighted me after a New Year’s Eve marathon of Twilight Zone watching, which also featured a lot of Funny Face jazz. It was one of the first times that a jazz show brought back memories, because I’m not a lifelong jazz fan. There was something oddly comforting in the memory and then something even nicer yet when the music went more modern and it didn’t remind me of anything. It stood on its own to make a new memory.

The ensemble was a new compilation, although it included three accomplished musicians. I first saw Davu Seru doing a drum duet, which was unusual and amazing. And drums doesn’t really do his work justice; he plays percussion, which includes drums with a series of “drumsticks” ad bells and other instruments that are at times jazzy and often sounding like they have been struck from nature.

Nathan Hanson has played all over the world, with and without the Fantastic Merlins. On stage (which is sort of over stating the position in the intimacy of the Khyber Pass Café), he is very no-nonsense with two instruments that let him move seamlessly and without hesitation from one song to the next. There’s something inherently sexy about a saxophone, the  brassy whine against the beat of the drum and bass.

Doan Brian Roessler is a bassist and a Buddhist priest, which might explain the prayer bowls that he also plays. It seemed different (but in a good way, not a Minnesota definition of different) to toggle from grand upright bass to tiny prayer bowl, but it worked. What really impressed me was the muted beating of the bass that gave room for the other musicians to shine – although, especially in the second set, Roessler’s playing became very intense too. Actually, all three musicians seemed to get even stronger at the night aged – very fun to see.

Next week (January 8) Le Percheron is playing; the first set sounds like a series of duets among Cory Healey on drums, Levi Schwartzberg on vibes, Brandon Wozniak on sax and Adam Linz on bass. During the second set, everyone will play together.