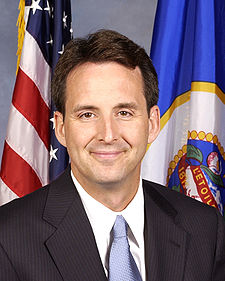 With Tim Pawlenty now publicly courting Mitt Romney, who needs a bland white guy as his running mate like he needs to tone down charisma, I pulled up this Ground Zero I wrote about T-Paw back in ’06. Still relevant today when it comes to this pandering sack of processed cheese curds.

Tim Pawlenty was famously raised in a blue collar family in South Saint Paul, a town that grew up to accommodate the stockyards and railheads located just downstream from Saint Paul. During a career which has, in addition to his political success, included service as a prosecuting attorney and more lately as an executive with a high-tech company, he has made much of his roots, declaring that no matter how far upward mobility has taken him, he has never forgotten where he came from. This rootedness, in turn, enables him to indentify with the struggles and aspirations of ordinary working men and women. Or so he has said.

Fair enough. But in his transition from blue-collar kid to perhaps the most conservative governor in Minnesota history, Pawlenty severed one of the most important ties to his upbringing. Raised a Roman Catholic, Pawlenty left the Catholic Church and is now a member of the Woodale Church in Eden Prairie, a big-box “non-denominational” institution that is one of the growing number of Evangelical Christian suburban mega-congregations. Although he doesn’t publicize it in the manner of John Ashcroft or George W. Bush, he is a born again Christian and social Convervative who has managed by way of his low-key style to maintain cover as a more traditional Libertarian Conservative.

Pawlenty has explained his transition from Catholic to fundamentalist by saying that the decision was based, essentially, upon convenience and the desire to maintain family comity. After settling with his wife in Eagan, he decided to go with the flow and attend the church of her choice rather than have the family trekking from one congregation to the other. So — la-di-da. The move could be perceived as less a conversion experience than a merely functional choice on the part of a man with no deep religious convictions.

Or was it? Pawlenty’s conversion can also be interpetated as both a shrewd political move – surely he was astute enough to sense which way the wind was blowing in Republican circles – and an indicator of the deep ideological affinity between the harsh Social Darwinism and worship of the Total Market of right wing extremism and the values and moral code of Evangelical Christianity. Much has been made of the marriage of these two movements in contemporary America, but this has been much more than a marriage of convenience. Rather, it has been the love-match of two belief systems that hold, in essence, that all that matters is Me and Mine. The simultaneous rise of a progressively more radical Republican Party and born again Christianity is not simply a coincidence. Born again Chrisitanity is not merely the religion of choice for the radical right. It is the religious system that, in a way precluded even by conservative Catholicism, gives sanction and encouragement to the dog-eat-dog worldview of the radical right. To that degree, Pawlenty’s transition would seem, in fact, to be an expression of his extreme political convictions.

As a movement, evangelical Christianity got its start in the English Midlands in the late 18th century just as the Industrial Revolution, with its promise of undoing all the traditional ways of doings things and turning society upside down, was getting up a head of steam. It migrated to the New World on the heels of numerous charismatic preachers who crossed the Atlantic and then traveled up and down the Eastern Seaboard bringing their message of personal salvation through the embrace of Jesus Christ as Lord and savior.

The movement received its impetus from a number of cultural and religious trends. Among other things, it represented a reaction against the rationalism of the Enlightenment and the gradual loss of fervor that had overtaken Protestantism some 100 years after the upsurge in such fervor during the English Civil War. Its emotionalism was not new; instead, it was a revival of the florid expressions of religion conviction common to the many sects that appeared during and just after the Civil War, sects dismissed by more conventional believers as “enthusiast” (it’s ironic that the Quakers, most notable now for their placid meetings for worship, got their popular name because of the tendency of Friends to “quake” – shake violently – during meetings in the early, heady day of the movement). What was new was evengelicism’s combination of emotionalism with a pure, one might even say violently pure, strain of Pietism, one of many current strains of religious throught unleashed by the Reformation.

From its beginnings, Christianity had carried within itself a duality. On the one hand, it emphasized the need for personal salvation. On the other, it emphasized that this personal salvation could only occur within the context of communal redemption. Faith in Jesus Christ was necessary for salvation. But so was the need for “good works,” a point made emphatically clear in the Epistle of James, considered by many religious scholars to have been Jesus’s brother.

Protestants tended – and still do – to divide themselves along the fault line of faith and works, with some sects placing greater emphasis on the Pauline insistence on salvation by faith, others on a combination of faith and works. Pietism is the name given to those sects that came to focus on salvation by faith to the near exclusion of salvation by works. Salvation lay, in other words, entirely upon the quality of your belief, not by anything you might do to alleviate – or even notice – the suffering of your fellow man.

While in its early days in particular, Evangelicals were extremely active in good works of all kinds, ministering to the sick and poor, running orphanages, establishing charitable organizations, there never was any compelling ideological reason for them to do so. And from the very beginning, those charitable activities were inseparable from an evangelizing motive – i.e., as a quid pro quo for conversion. In other words, charitable works were not undertaken as a good in and of themselves, because Jesus said that those who care for the least among us are also caring for him, but as a kind of marketing tool, targetted at a large pool – the growing army of people pauperized by Industrialism – of potential customers. Stripped to its core, Evangelical Christianity has one stark message. All that ultimately matters is one’s personal salvation. Small wonder that it proved to be the perfect system of religious belief to justify the brutality and dehumanization of both the Gilded Age and of imperial expansion.

As the century progressed and Social Darwinism arose to give ideological support both to the Brute Capitalism and the shameless rapacity of colonial imperialism (between 1890 and 1910, an estimated 10 million to 20 million natives of the Congo Basin were either worked to death or died of starvation and disease under the ministrations of the Belgian Empire, inspiring Conrad’s Heart of Darkness while also foreshadowing the 20th century’s totalitarian horrors) it’s easy to see how evangelical Christianity dovetailed nicely with the dominant political and economic movements of the day.

And in our day and age, when the long twilight period of fear and loathing ushered in by World War II and given new life by the Cold War has now found fresh impetus in the “war” on terror, when we have witnessed the emergence of new and even more fearsome combinations of trusts and monopolies, when the greed and vanity of our business elites rival the most egregious excesses of the Gilded Age, Evangelical Christianity has arisen once again to serve as handmaiden to a new round of Social Darwinism under the guise of a purblind and punitive “privatization.”

The affinity between Social Darwinism and Born Again-ism also continues to show itself in Evangelical Christianity’s application of industrial models of production to the saving of souls and the raising of money. Evangelicism certainly encourges charity, but it is always charity in the name of personal salvation, and while born again Christians are famous for the amount of money they donate to their churches, they are considerably less notable for the amount of money they donate to purely charitable organizations. In opposing the attempt to reform Alabama’s notoriously regressive state tax system – an initiative, ironically enough, of a born again governor – the Christian Coalition took the standard tack that caring for poor folk was not up to the government. Fair enough. But what such sanctimonious hucksters never get around to mentioning is who, exactly – which church, which congregation, which community of do-gooders – is responsible for caring for the poor?

By contrast, the Catholic Church – which Pawlenty abandoned – for all its flaws and many crimes, has never lost sight of the “good works” part of the New Testament message. That’s why even though there are certainly ultra-conservatives in the ranks of the Catholic Church like Pat Buchanan and William F. Buckley, even these two men cannot be fit comfortably into the square peg of contemporary rightwing extremism. Even these two men demonstrate a complexity of thought, a not entirely predictable range of political responses utterly absent from the lockstep conformity of social conservativism Neither seems entirely comfortable with the idea that all we are here on Earth to do is save our own sorry hides and screw everybody else.

It’s important to make distinctions here. Not all born again Christians are indifferent to anything but their own fate. But the underlying ideology of this brand of Christianity certainly breeds, because it justifies, the callousness, vengefulness, and greed driving the extreme right agenda. It is the same kind of callousness that allows the born again movement, as a movement, to propose and contemplate with equanimity, the hideous death of most of humankind – men, women, children, unborn children – in the wholesale slaughter that is part of the sci-fi apocalyptic vision of The Rapture. Tim Pawlenty’s departure from the church of his youth to the church of Bush’s America has more than personal significance. It demonstrates that, contrary to his claim that he remains true to his roots, he has in fact utterly abandoned those roots, lock, stock, and religious conviction, to cast his fate to a movement that seeks to turn Minnesota into a cold-climate Texas.