Why do we still have political conventions? There is a legal requirement that they actually sit down and have the formal vote on who their nominee will be, but that does not take days of speechifying and pageantry. If another political party like the Greens or Libertarians tried to get their conventions on prime-time teevee night after night they’d be laughed at. So why do the two parties get so much unfiltered airtime?

Because people watch it.

About 40M Americans watched Obama’s acceptance speech in 2008, and nearly 2/3 of all Americans watch at least some of the conventions. That’s about the same as the Olympics, generally speaking. People actually want to hear the candidates speak without filters, and they want the party to tell the world what it stands for. 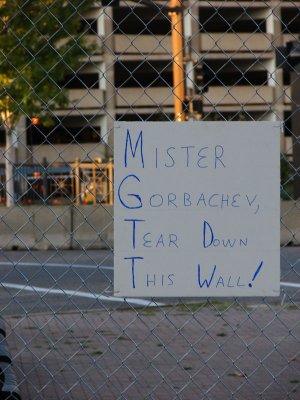 The last Republican convention was in my neighborhood, and frankly I’d rather forget it if I can. It was an unpleasant experience, and not because Republicans came to town. I would have happily welcomed actual people of any belief, to be honest, if they sat down and had a friendly chat over beer. What we had was an armed compound with extras bused in from somewhere else as protesters tried to disrupt it. Our little town was nothing more than a backdrop, a prop – the stage upon which the world was introduced to Sarah Palin.

That’s what I love about St Paul – it has a strong sense of karma. Git-back is a muthuh.

Tampa has its turn now, and it looks as though they were better set up for this kind of event in the first place. Excepting the action of hurricane Isaac, who will probably hit New Orleans just hard enough to make everyone wonder why we rebuild below sea level, this can go off with just about the right amount of protester action to make it look important without actually getting in the way of the production for teevee. That’s what the organizers really want.

It’s also what American voters want, more or less. Each party gets its turn to make its case and then they decide. Think of it like a trial where we all don’t have jury duty for more than a few minutes in November. The process is more than just traditional, it is how we do just about everything.

The stakes this year include about 29 percent of all voters. These are the people who are not strongly in support of either candidate and generally unenthusiastic about the entire election. That could mean that these conventions are even more important than usual, at least if one side is capable of making its case much better than the other. The first thing to close is the enthusiasm gap – give people a reason to actually show up to vote in the first place.

Most of that job will fall on Romney simply because he is the challenger. It’s tough to knock off a sitting President that we have seen looking presidential and simply gotten used to. It’s something like a marriage – you don’t leave it casually. Obama is the guy and he’s OK and all that … who is this Romney person? Very few re-elections have not been won by the incumbent – the only loser in the last 140 years was George HW Bush, knocked off by the dynamic and charming Bill Clinton. But what really did Bush in was a failing economy and perhaps the slow response to hurricane Andrew.

Is there enough in place to knock off Obama? If you look at the economy, that’s a maybe. There has been job growth, but it’s terribly weak and looks like it is going nowhere. Confidence is at a terrible low, and from what anyone can see will likely be through the entire next term (at least as predicted by K-Waves). If you look at the challenger, we don’t have a young, charming candidate with a new agenda as we did in 1992. Barring an outlier event, things look good for Obama this year – but we have outlier events all the time these days.

Where is that hurricane, anyways?

Perhaps the most important speeches will be between the conventions, when Ben Bernanke speaks to the Jackson Hole Conference at 9AM EDT on Friday, 31 August and then European Central Bank (ECB) Chair Mario Draghi speaks on Saturday. This is when we might learn just how likely the unlikely has become.

In the meantime, we have some pageantry a speeches that an awful lot of people will in fact be watching. If the Romney team plays it the way that they’ve played the campaign so far we can expect caution and nothing too outrageous. That is, unless the rest of the party gets a bit antsy from sitting there too long as nothing but a backdrop.