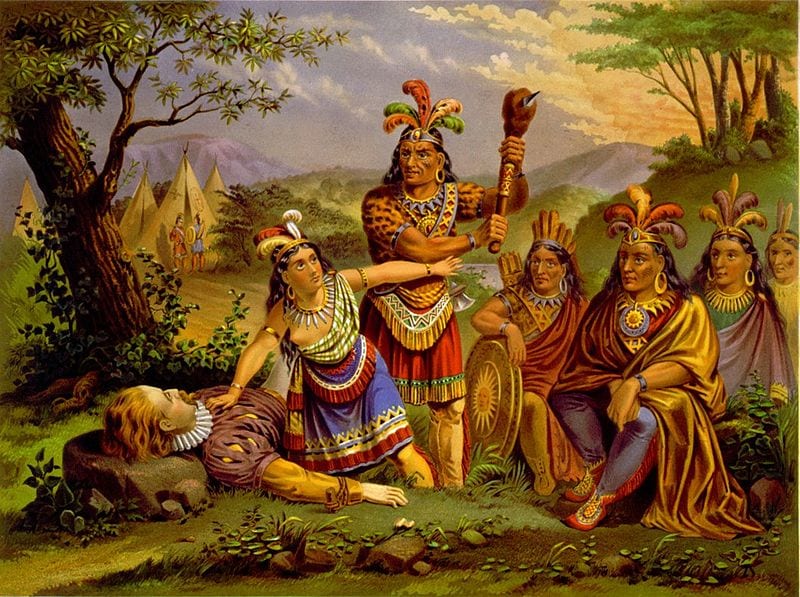 Pocahontas saving the life of John Smith, as depicted in an 1870 illustration by an unknown artist

A scene in Pocahontas: A Woman of Two Worlds has Pocahontas (Linh Kauffman) falling to her knees with outstretched arms, portraying the anguish of a woman who struggles to understand who she is and where she belongs. The poignant moment, moreover, pinpoints the emotional controversy surrounding the opera since it made its Minnesota debut in Duluth on Sept. 22.

The opera, much like Pocahontas, seems to be caught in a conflict between two worlds. After the performance at the Burnsville Performing Arts Center on Oct. 1, over 100 community members—many of them protesters from the Native American community—had the opportunity to share their views regarding the opera with composer Linda Tutas Haugen and other members of the cast and production. Artistic director Craig Fields moderated the discussion and was asked to explain why there was not a single Native American cast in a principal role. Fields, who managed the auditions, defended the decision by saying that few Native Americans applied. Some expressed disbelief that there were few qualified or interested opera singers in the Native American community.

“The power of this piece opened our minds to the time in history which was so divisive—the beginning of a dark, tragic time of loss. For Europeans, a time of hegemony and expansion. The creators of this piece tried to set the record straight. In doing this we honor the Native Americans,” Fields said.

With this comment, American Indian Movement (AIM) chairman Frank Paro walked to the front of the room so as to address the crowd straight on: “If this is the opera’s way of honoring the Indians—it’s a fucking joke.” Paro was immediately chastised by crowd members for his use of language and several people walked out in response. Mike Forcia, chairman of AIM stepped forward: “I apologize for my brother’s language. This history that we speak of—you didn’t do it. Your ancestors did it to ours. You are still benefitting from it and we are still suffering.”

A woman who didn’t introduce herself spoke next: “I wanted to like [the opera] but it was stereotypical.” She pointed to the character of the Indian priest who sang in simple English phrases. “This is embarrassing as an Indian person. This keeps us stuck in the past. We have always been eloquent speakers. The desire to make him regal made him stupid.”

Haugen was asked if she was surprised by the controversy her show created. “When the opera was performed in Virginia, it was well received and Native Americans there felt honored. I was surprised; I thought that this would be a wonderful opportunity. My intent was to bring people together,” she responded. “I never imagined Native Americans would be so offended. From the bottom of my heart…I wanted it to make a difference,” she tearfully continued.

Nicole Ammesmaki, one of the Fond Du Lac dancers, spoke up and addressed her remarks to the protesters: “I was very honored to be asked to be in the show. The cast and crew did ask us for our opinions. This is ridiculous. You’ve made people cry. Why are you turning on these guys?” The meeting tied up shortly after one woman stood and explained that art is supposed to move people, negatively or not: “I am thankful to be in an audience where there is controversy. I’m so glad we’re having this conversation. Thank you all.”

The opera opened with Pocahontas on her deathbed in Gravesend, England, 1617. Deep rolling drums and plaintive strings set the ominous tone as Pocahontas looked back at her short life (it is estimated that she died barely out of her teens). Time and place constantly shifted, circling back to seminal events as if to suggest things could have turned out differently. Pocahontas’s mother (Jessica Medoff), a dignified and comforting presence, served as a sort of narrator. She and the young Pocahontas (Juli Bunyak) often stood by and watched the action of her later years unfold. The story came full circle with the cast gathered around Pocahontas’s deathbed once again, praying for peace and rain and followed by a reprise of the original theme, “We come only in passing.” A deep drum roll recurred to end the show and was cut off at the peak of its rising crescendo; the crowd rose to their feet for a standing ovation.

Bunyak was well suited for the role of young Pocahontas—her lyrical voice was limber and animated. Kauffman as the older Pocahontas portrayed her as strong and intelligent, both before and after her capture. Her deeply expressive voice conveyed what words could not—from being kidnapped by the English to undergoing the transformation to Christian wife of John Rolfe and guest of the King in London. The entire cast performed well and reflected the professional standards of this production. The chamber orchestra, ably directed by conductor Markand Thakar, successfully layered traditional orchestral instrumentation with subtle touches of Native drums and flute.

The opera flowed quickly through 10 scenes without an intermission. The inclusion of the Fond Du Lac Singers Jarvis Paro and Jamie Petite drumming and singing while Danny Barney, Nicole Ammesmaki, and Marcus Ammesmaki performed Ojibwe and Dakota dances was a treat, but left me unclear as to how local tribes were part of this carefully constructed story of Pocahontas

The opera was performed in Duluth, Ely, Grand Rapids and Burnsville this fall. Check the Duluth Festival Opera website for more details regarding possible future performances.