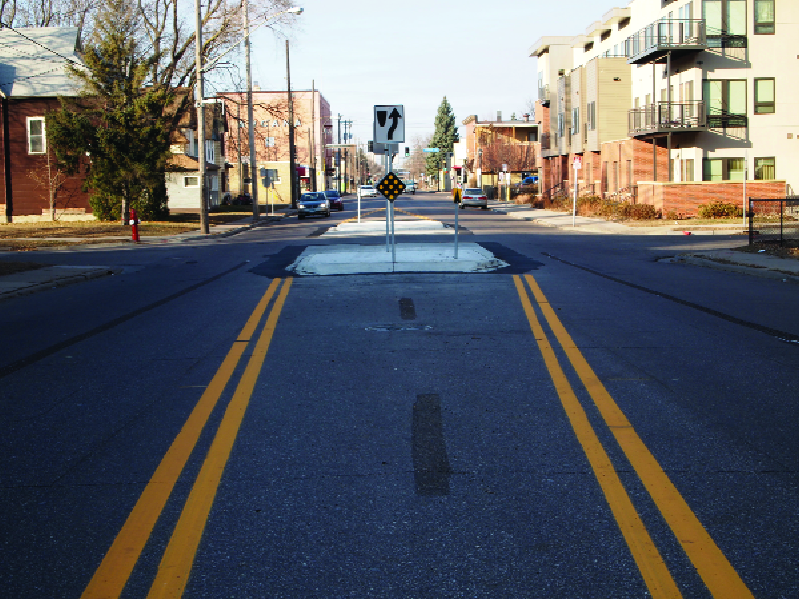 The point of the Presidents Bicycle Boulevard is to create a north-south route that’s safer for people on bikes than traveling on busy Central Avenue. Above, a place to land on Lowry, a traffic calming circle at 28th and Polk. Below, an example of wayfinding signs where eventually, an overhead flasher and crosswalk are planned. (Photos by Margo Ashmore)

Construction cones gone, the slabs of concrete in the middle of Lowry Avenue at Polk now have permanent signage. People are still asking “what are those things and why are they there?” They are part of the traffic calming measures for the “Stone Arch Bridge & Presidents Bicycle Boulevard.”

According to the City of Minneapolis website, the boulevard runs along these streets (from north to south) as shown in the accompanying map:

Bicycle boulevards are low-traffic, slow speed streets marked with bike symbols, with special treatment at intersections, where bikes share the road with cars. Bicycle boulevards are planned on all of the streets listed above, with the exception of East Hennepin Avenue, where the sidewalk will be used, and Sixth Avenue SE between University Avenue and the Stone Arch Bridge, where bike lanes already exist. Bike racks will be installed in some places.

Green and white wayfinding signs have been installed. The streets have not been marked. Aside from Lowry, here are the other traffic calming and stop sign changes. They are yet to be funded and installed. 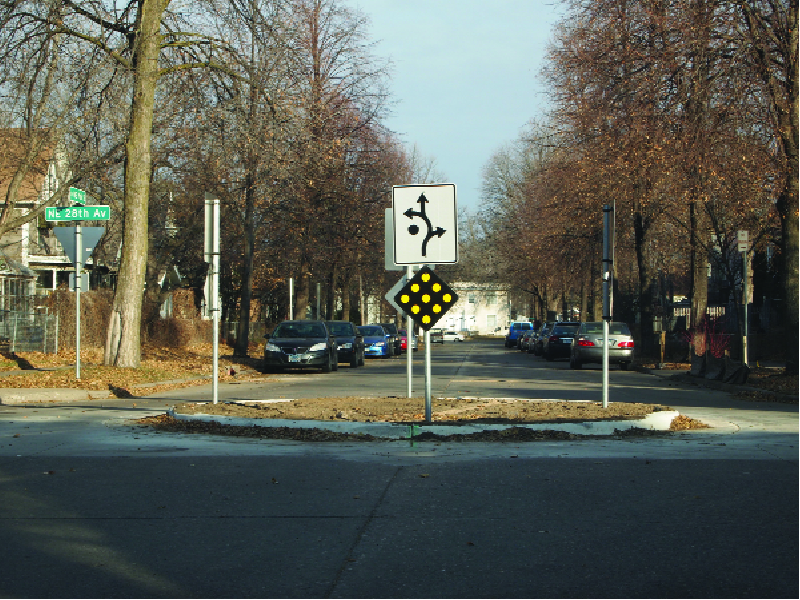 Fillmore and Spring where neighborhood feedback stopped the construction.

On Polk Street at 28th Avenue, they’ve placed a miniature traffic circle, and removed stop signs for a 4-way yield (meaning traffic is supposed to slow down, follow the sign which indicates how to turn around the circle on its right, for a left or to go straight).

In Beltrami Neighborhood, where workers had dug out pavement for another mini traffic circle at Fillmore and Spring, Third Ward Council Member Diane Hofstede requested that the Public Works Department put construction on hold “because of the feedback received by me from community members, and businesses stakeholders, in order to engage the community in a discussion about the design of the intersection, and meet the needs of neighborhood.”

In a letter hand-delivered to nearby residents, she said “Public Works crews will be filling the hole with temporary concrete and gravel. Crews will also place a test miniature traffic circle, in order to evaluate concerns, including parking, and truck and school bus access. This will be a test and temporary measure, and will have temporary traffic posts and yield signs. Parking will not be removed as part of the test. The test does not mean the traffic circle will be permanent, or that any parking will be removed.”

Hofstede met with neighbors and Public Works representatives Wednesday, Nov. 13, about design options. It’s expected a solution will be decided and implemented in the first half of 2014.

For more information, contact Shaun Murphy with Public Works at 612-673-3166, shaun.murphy@minneapolismn.gov. You can also visit the Presidents Bike Boulevard website at www.minneapolismn.gov/bicycles/projects/Stone-Arch-Bridge-Presidents.