From the first time I voted in 1968 until 1996, I had considered myself a Republican, although I frequently crossed party lines. But in 1998, I finally began attending the DFL Caucus.

To explain my past, I will tell you I consider myself to be a moderate. A key factor in my voting decisions over the years has been the issue of fiscal responsibility. I remained under the GOP banner as long as I did because of Governor Carlson who I admired because of his success with state’s finances and economy.

Reagan during his presidency was able to sell tax cuts particularly for the wealthy based on Trickle Down Economics, which is a theory that tax breaks for the rich would trickle down to the middle class and poor.

This policy had two major achievements. First, the result was the rich got richer and everybody else got poorer. Second it resulted in growing Federal Deficits and turned around the trend of the previous 35 years of a debt shrinking with respect to our ability to pay. 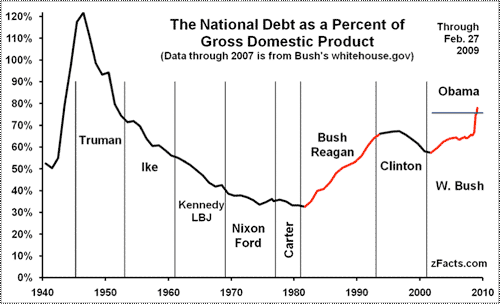 Despite all the claims that our debt is due to spending, you can see from the chart the major problem is due to the excessive tax cuts for the rich particularly during the Reagan and the second Bush terms. Yes, we are running up big deficits today because of spending, but almost every economist alive will tell you this is necessary if we want to get out of this recession, a very severe recession due in part to the economic policies of the previous administration.We as voters, and our political leaders need to get away from the concept of dealing with tax and spending. We need to get away from supply side economics that looks at taxes first and then decides on spending.

Minnesota has had a strong economy because it has served its populace, and invested in its people. Since the Ventura Administration’s tax cuts, state government has typically been short on the revenue side, especially during economic downturns, resulting in deficits, shutdowns and reduced investment. The net has been declines in many areas including job creation, education, per capita income and unemployment. If we want to end this shutdown and the deterioration of our economy, we need to reverse the strategy of the last ten years.