In getting to majorities, we need to persuade people who are not like us. Jon Haidt says on a TED talk that basically liberals have two ethical values while conservatives have five ethical values. In looking at this chart, One side is liberals and one side is conservatives. Note that the measurement of the bottom three values is low on the liberals’ side and then goes steeply up with the measurement of conservatism. 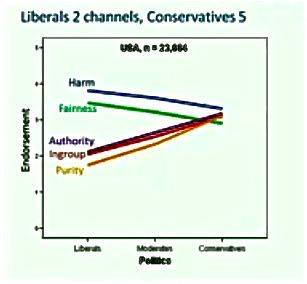 (TED Talk:Jonathan Haidt on the moral roots of liberals and conservatives)

It is the differences in ethics between liberals and conservatives that give us the clues on how to persuade better.

The top two values are shared by liberals and conservatives, although liberals have a much stronger emphasis on these two values. The “Harm” value is the compassion felt for others and the need to prevent harm. The “Fairness” value is the golden rule; the need for fairness and reciprocity. Many of the progressive top values are variations of fairness: responsibility, integrity, justice, opportunity and equality.

And this tribal psychology is so deeply pleasurable that even when we don’t have tribes, we go ahead and make them because it’s fun. Sports is to war as pornography is to sex.
(TED Talk:Jonathan Haidt on the moral roots of liberals and conservatives)

When liberals talk of a group, they talk of community and they always try to make the community as large as possible. The whole world being the ideal community.

However in the conservative universe these communities are much smaller. More importantly is what happens to those defined as outside the group. This is where conservatives seem to violate the do-no-harm value. In peace terms, we call exclusion making somebody the other or demonizing them. The step of demonizing is a necessary precursor to doing harm. So when does tribalism turn into xenophobia?

Tribalism can explain why Republican can do so much wrong and are never held accountable by other Republicans.

So can tribalism be used to persuade? How about quoting Reagan, Goldwater or Milton Friedman? How about invoking the tribe of America

Interesting how conservatives demanded authority and respect for President Bush but will not provide it for President Obama. They also don’t seem to like their own presidential candidates. Conservatives embrace authoritarianism while liberals say “Let’s question authority.”

So again quoting Reagan, Goldwater or Milton Friedman should invoke this value as well. Do note that conservatives have totally rejected scientists who they should respect as authority. I think a piece of this is staying consistent. Authorities are supposed to be “deciders” not “flip-flopers.”

While the political right may moralize sex much more, the political left is really doing a lot of it with food. Food is becoming extremely moralized nowadays, and a lot of it is ideas about purity, about what you’re willing to touch or put into your body.
(TED Talk: Jonathan Haidt on the moral roots of liberals and conservatives)

Liberals say “Keep your laws off my body.” Basically, conservative morality is hard for me to even write about, it so disgusts me. This is why religion gets a bad reputation. Every kind of hate of GLBT, every put down of women and many double standards come into play. Puritanism was a form of this ethic. At the same time that Republicans say “Don’t tread on me,” they do invade bodies and personal choices, imposing their ethics and religion on others.

I keep thinking that conservatives should discount their own leaders when they are violating the purity-sanctity rule but somehow it doesn’t work like that.

At the end of the analysis, I am not sure how to utilize the three conservative values well. Do you have any ideas?