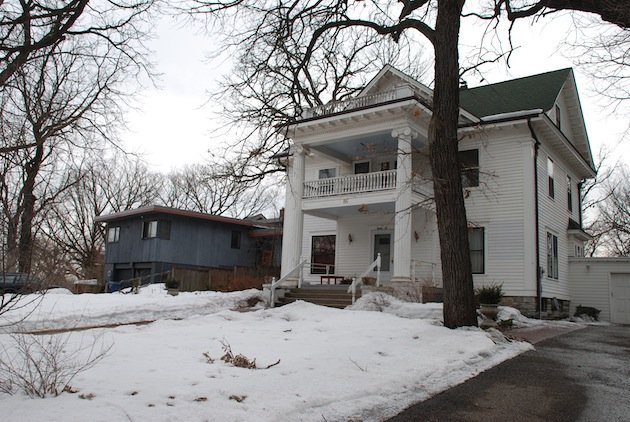 Recent controversies over a teardown moratorium in Southwest Minneapolis and massive development in Dinkytown have highlighted many city residents’ desire to control what’s happening in their neighborhoods. On the other side, many developers criticize the push for limits as “not in my backyard” opposition to progress.

Four years ago, the Prospect Park and East River Road Improvement Association helped support a study that looked at conservation districts in other cities to see how the concept could be used here.

One of the authors of the study, Greg Donofrio, assistant professor of architecture and director of heritage conservation at the University of Minnesota, joined Second Ward City Council Member Cam Gordon and Minneapolis city planner John Smoley to explain conservation districts at a public forum for neighborhood residents, officials and developers March 28 at the University of Minnesota.

Gordon has proposed the “conservation district” idea as a way to control change that undermines the character of neighborhoods while still allowing the city to grow. Minneapolis residents could preserve the notable visual character of their neighborhoods, even if they’re not historic, under these proposed changes to the city’s historic preservation rules.

Even if a conservation district plan is approved, Gordon said, it would be too late to stop a proposed hotel in the Dinkytown business district adjacent to the University of Minnesota, unless the area receives historic designation.

“It would have been nice to have had this tool four years ago before the current developments started,” he said. The city could have done a more thorough study of the six-story Venue and Marshall apartment buildings in Dinkytown, which was previously dominated by one-, two- and three-story buildings.

The hotel, proposed by developer Kelly Doran, would also rise to six stories on a block that remains dominated by the smaller business structures. The historic designation study could take another six months to a year, Gordon said. The Doran hotel proposal could require zoning changes and variances – tools that some say make the conservation district idea unnecessary. 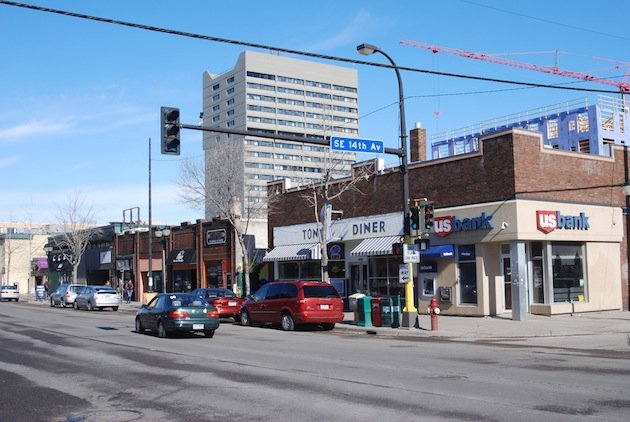 City planners are studying whether this block should be designated as a historic site, making it difficult to build a proposed hotel that would take out the farther brick building in Dinkytown. On the right, the blue insulation shows where the six-story Venue apartment building under construction will look down on Dinkytown. 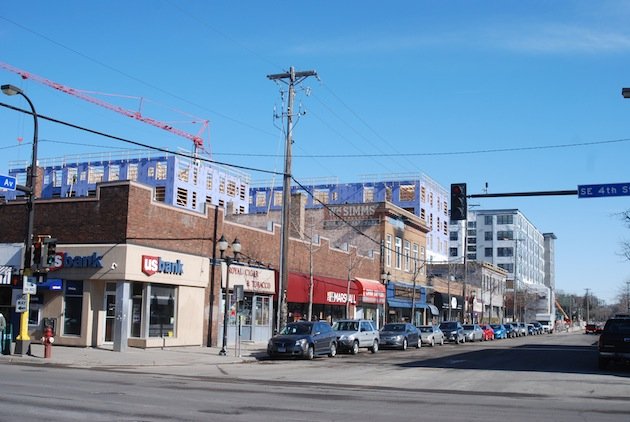 Conservation district designation for Dinkytown may have required more study about compatibility between existing buildings and new developments like the high-rise apartment buildings under construction in the background.

“We want to have the strongest possible proposal to take to the City Council before seeking approval,” Gordon said, adding that community input will be necessary to design the ordinance before work can begin on designating specific districts.

Defining what is “notable,” as opposed to historic, is just one of the problems of definition required for the proposed ordinance. Other issues involve the percentage of property owners that would have to approve a district and the size of the staff the city would need to monitor it.

Some cities have entire staffs to administer a district and some have one person who determines whether a development meets a district’s guidelines. The size of the staff and funding are among issues that need to be decided, Donofrio said.

Conservation district designation would require developers to be sensitive to the neighborhood context in which new buildings are constructed.

One successful city – Stillwater, Minn.– has its historic architecture essentially intact through a plan similar to a conservation district, Donofrio said.

Stillwater calls it a “good neighbor” approach to maintain “the visual harmony of the streetscape and the prevailing patterns of neighborhood houses,” Donofrio said. “It does not prevent additions or alterations to existing buildings.”

Other cities, like Cambridge, Mass., regulate “appropriate infill” that requires that new homes align with the predominant street setback and maintain the overall massing rhythm, sideyard spacing, and height of the neighborhood, Donofrio said.

“I’m not defining conservation districts as they exist here in Minneapolis,” Donofrio said. “The studies that I’m giving are gleaned from the literature and about how these tools are understood throughout the United States.”

“We didn’t intend to make a recommendation whether Minneapolis or St. Paul should adopt a conservation district,” he said. “That still needs public engagement.”

The current historic designation has a number of levels, he said, ranging from local to national preservation with varying guidelines and regulations.

Donofrio said conservation districts have been defined in different ways but they usually have a goal to preserve a “distinct physical character but may or may not merit designation as a historic district.” They protect the character of streetscapes in older areas and often might prevent teardowns and incompatible new construction and alternation of existing buildings.

“A bright line does not exist between what is called a historic designation district and a conservation district,” Donofrio said.

Some cities have commissions, “a local government body empowered to designate and protect historic resources,” he said. New York City has an LPC, land preservation commission, to study proposed teardowns.

Donofrio said the number of historic designations has been growing. In 1975 there were 421 historic districts in the United States, in 1983, 800 of them and in 2009 2,500 of them. They follow guidelines set by the U.S. Secretary of the Interior and enforced by local commissions. About 60 percent of the commissions can enforce mandatory decisions about 28 percent are advisory recommendations. The rest can vary, such as mandatory on public property and advisory on private land.

Thirty-five states, including Minnesota, have legislation allowing local governments to establish conservation districts and about 165 were established by the time of the 2010 study.

One of them, Queen Village in Philadelphia, had some of the most historic properties in the nation, ranging from the 18th, 19th, and 20th centuries. Garages were being built into what had been historic row houses with heavily used sidewalks, Donofrio said.

A grassroots movement organized to prevent their neighborhood from being further “garagified.” One city planner, rather than a commission, determines whether buildings are in compliance with conservation guidelines, Donofrio said.

Another example, the Half Crown-Marsh Neighborhood Conservation District, Cambridge, Mass., was interested in only revolutionary era buildings for historic designation until residents organized for a “different type of tool” to save historic buildings from other eras as well, he said.

All of the cases are “very much a citizen-initiated process”, even when done with the help of a historical preservation commission, Donofrio said, adding that property owners, homeowners and historical commissions should be involved.

“The Minneapolis model,” Gordon said, “will be an amendment to the historic designation ordinances to guide development where there has been enormous growth and where residents are preparing to welcome much greater diversity.”

“It’s pretty clear the city will be growing. People are going to want to stay here. People want to come here,” he said.

Gordon said prerequisites for conservation districts in Minneapolis have been met: the state has provided the authority; they are mentioned in the city’s comprehensive plan; and organized groups of property owners are asking for them.

“This isn’t intended to be some blunt tool to stop development when it is happening,” he said. “We want to be growing in ways that foster the harmonious, orderly and efficient growth and development of our city.”

“There are treasures,” Gordon said. “There are incredibly charming places. If someone said, ‘Let’s put some density on Lake Calhoun,’ a lot of people would say, ‘Of course not. Let’s put the density in other places.’”

Planner John Smoley said the city’s comprehensive plan already has some tools “to assure that development is context-sensitive to a certain extent in our zoning code and comprehensive plan, but we don’t have the focus on visual characteristics that some people would like to see.”

Conservation districts are intended, Smoley said, “to fall somewhere between those existing tools and to try to contribute to the visual character of a district.”

Under the proposed ordinance, property owners could suggest a geographic area, suggest contribution properties with photos, and suggest characteristics to preserve, Smoley said.

The district should have “at least one block face with two or more principal buildings or a key intersection with all four corners of that intersection included in the district,” Smoley said. “A majority of properties should have notable characteristics.”

Gordon said he would like to move the proposal to the City Council in the next month or two and he needs more public involvement.

The proposed ordinance can be read and feedback left at

The March 28 discussion was hosted by the University’s Center for Urban and Regional Affairs and the University District Alliance at the Carlson School of Management.

Jessie McClurg, an architect in St. Paul, was a CURA research assistant four years ago and the primary author of the study Donofrio cited.

In the Prospect Park neighborhood, architecture styles are already eclectic.

Here's another example of eclectic architectural styles in Prospect Park.

City planners and residents would work together to make new housing compatible with existing homes in neighborhoods.

Here's another example of eclectic architectural styles in Prospect Park.